Chaos in Canada as Van Gisbergen and Mostert claim spoils

Chaos in Canada as Van Gisbergen and Mostert claim spoils 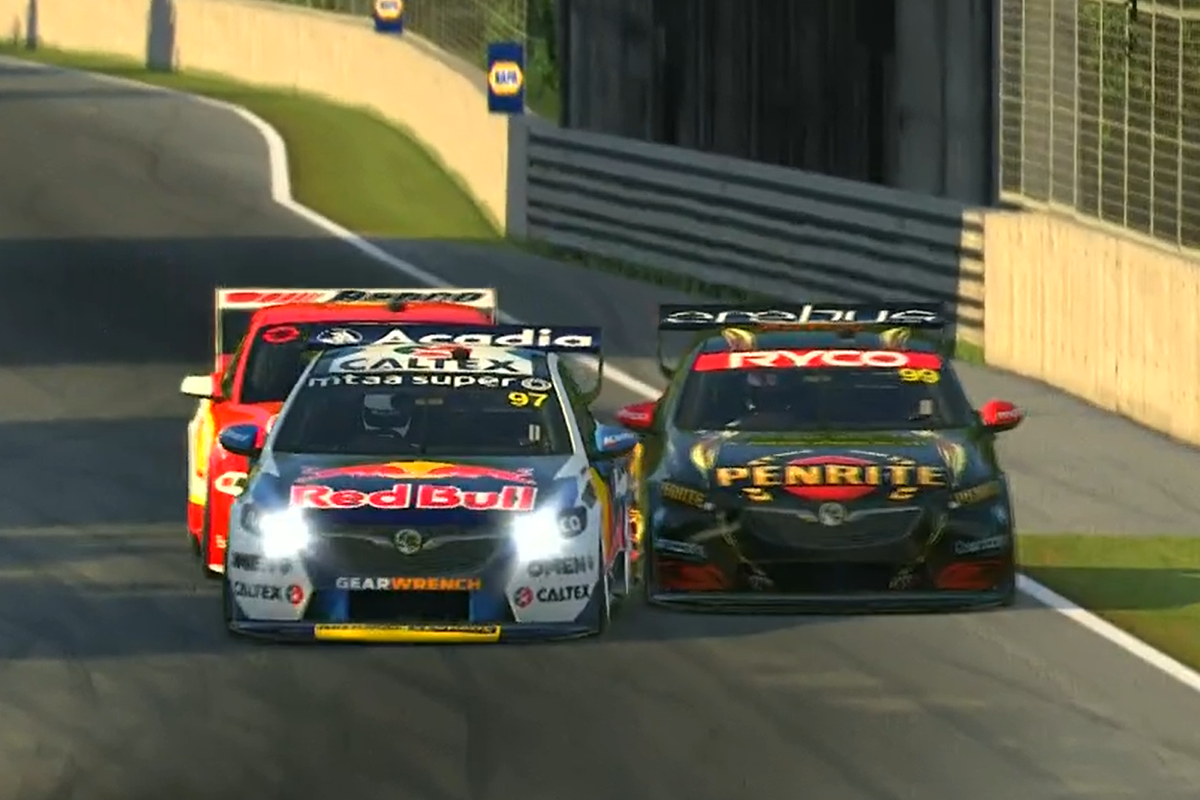 It was a three-way battle in the opening race of the night that saw van Gisbergen hold out a late charge from Anton De Pasquale and Scott McLaughlin to take another win.

After a relatively trouble-free Race 11, there was carnage aplenty in the reverse grid Race 12 with only the second safety car of the Eseries to date being deployed.

Chaz Mostert emerged unscathed out of all of it and managed to take a comfortable win ahead of Cameron Waters who surged from the rear of the field to claim second over Zane Goddard.

Shane van Gisbergen held off a spirited challenge in Race 11 of the Eseries in what was an enthralling battle with Anton De Pasquale and Scott McLaughlin that climaxed on the final lap.

Initially, it was De Pasquale that got the jump at the start. However, he went deep into Turn 1 and that allowed van Gisbergen to get under the Penrite Racing driver and snag the lead.

Shell V-Power Racing Team driver McLaughlin sought to make headway out of Turn 2, but De Pasquale was resilient in defence.

There was chaos at the rear of the field. Several drivers came to blows, including Fabian Coulthard, Bryce Fullwood, Rick Kelly, Mark Winterbottom, Macauley Jones, and Alex Davison who were all victims of the Lap 1 melee.

At the end of the first lap it was van Gisbergen who held a narrow advantage over De Pasquale. McLaughlin was further back in third with Davison, Waters, and Heimgartner in a close battle to complete the top six.

A distant seventh was Chaz Mostert with Jake Kostecki, Bryce Fullwood, and Nick Percat the last of the top 10 runners.

Come Lap 3, Heimgartner got a move done on Waters at Turn 8.

Scott Pye was forced to tour the pit lane after cutting the course. Jake Kostecki had to serve a drive-through penalty as well for a dangerous re-entry to the circuit.

Lap 4 saw van Gisbergen come to the pit lane for his compulsory pit stop. Will Davison followed suit as did Mostert.

McLaughlin pitted at the end of Lap 5 and was followed by Waters, Heimgartner, and Fullwood.

By the end of Lap 6, De Pasquale pitted. The early stop paid dividends for van Gisbergen who held a handy margin over McLaughlin who got an undercut and leap-frogged De Pasquale in the pit stop sequence.

The gap across the top three began to narrow. As his tyres faded, van Gisbergen fell into the clutches of McLaughlin while a fresh tyres De Pasquale closed the gap as well.

Soon the cars crossed the line for the final lap and van Gisbergen went on the defensive into Turn 1 as McLaughlin attacked.

McLaughlin gave van Gisbergen a nudge into the Turn 2 hairpin and that forced the Red Bull racer wide of the apex.

Through went McLaughlin, but he was soon told to give the place back by Driving Standards Observer Craig Baird.

As he redressed, De Pasquale managed to find his way around the outside of McLaughlin into Turn 8.

De Pasquale sought to find a way through on van Gisbergen, but the positions stabilised.

Ultimately, van Gisbergen claimed the win ahead of De Pasquale and McLaughlin.

Alexander Rossi was the best of the wildcard performers in 16th with Super2 Series rookie Angelo Mouzouris in 19th.

Marcos Ambrose managed to come through to claim 22nd despite starting from the pit lane while Joey Logano finished 28th.

Chaz Mostert emerged victorious in a chaotic reverse grid Race 12 of the Eseries, cruising to victory ahead of Cameron Waters and Zane Goddard.

There was drama almost immediately as Smith bogged down off the line. He copped a hit from DeWalt Racing’s Scott Pye who surged through to the lead.

Logano was slow away too and was sideswiped by Team Sydney pilot Chris Pither. That sent Logano into a spin as the rest of the field sped towards Turn 1.

Logano was collected several more times as cars crashed every which way. Catrol Racing driver Rick Kelly and Irwin Racing driver Mark Winterbottom both found themselves in a spin.

Alex Davison spun at Turn 1, simultaneously Angelo Mouzouris and Bryce Fullwood made contact and spun into the asphalt run-off.

The carnage continued out of Turn 2. Pye ended up on his side in the tyre barrier. Moments later Jack Le Brocq was facing the wrong way.

The cars continued to pile into each other. Nick Percat got sent into the air and there were shades of the 2006 Bathurst 1000 as a traffic jam formed out of Turn 2.

Somehow, out of all the drama, it was Fabian Coulthard who led Chaz Mostert. The pair were streaks ahead of the field. However, it wasn’t long before the race was neutralised by the Safety Car.

Once the race was brought under control it was Coulthard who led Mostert, Zane Goddard, Jamie Whincup, Todd Hazelwood, David Reynolds, Cameron Waters, Bryce Fullwood, Will Davison and Kurt Kostecki.

The pit lane came alive on Lap 2 as the entire field, except Coulthard and Winterbottom, came into the pit lane.

The race restarted on Lap 4 with Coulthard at the head of the field. However, he still needed to take his compulsory pit stop.

Drama struck for McLaughlin who suffered an engine failure on Lap 5.

It wasn’t long before Coulthard was usurped by Mostert who had fresh tyres.

Coulthard eventually pitted on Lap 7. Once the pit stop sequence was completed it was Mostert who led Goddard. Waters was third and the biggest mover up the field.

Waters was able to usurp Goddard late in the piece. However, Mostert couldn’t be caught and crossed the line to claim a comfortable 3.9-second win.

Further afield, the Eserie front-runners were down the order. De Pasquale was 13th after getting caught out in an incident. McLaughlin was 25th ahead of fellow countryman van Gisbergen.

Racing continues with Race 13 and Race 14 at Watkins Glen International.