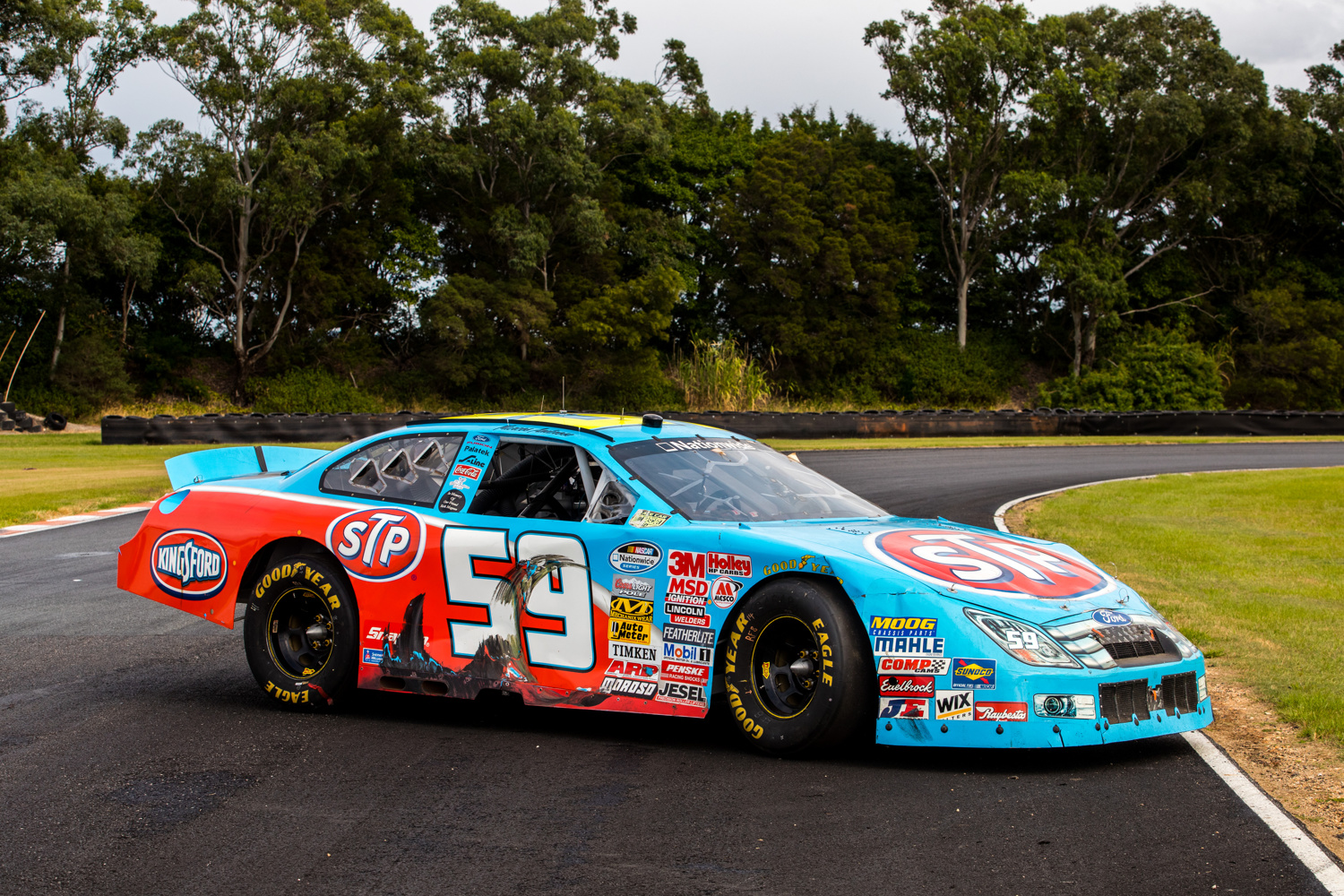 The covers have come off the Ford Fusion that Marcos Ambrose took to victory at Watkins Glen in 2008, which made him the first NASCAR race winner from Australia.

The unveiling comes only hours before Ambrose gets back behind the wheel for the fourth round of the BP Supercars All Stars Eseries race in a Pirtek-backed Ford Mustang tonight.

Considered an important part of Australian motorsport history, the #59 STP Ford Fusion sat in storage in an old workshop in Charlotte North Carolina for more than a decade before being mechanically rebuilt last year and shipped to Australia.

The car is owned by Speedcafe.com founder Brett ‘Crusher’ Murray who has relocated it to Queensland and plans to complete demonstration runs in coming months before putting it on the market.

The STP Ford has not been touched cosmetically since appearing in victory lane at the Zippo 200 and still has all the major bumps and bruises as well as the remaining windscreen tear-off strips that were unused during the race.

“I had some dealings with the team Marcos was driving for and ended up with the car,” said Murray, who worked as the media manager for Ambrose for several years.

“We had it rebuilt thanks to some NASCAR guys I had met and become friends with through Dale Earnhardt Jr.

“Mechanically we had to do some things to it to bring it up to scratch, but cosmetically it has not been touched. There are even some Gatorade splash marks still on the roof and windscreen.

“Owen Kelly, who enjoyed his own NASCAR career, helped me with the logistics to get it back here.

“The Charlotte-based guys sourced all the original 2008-spec parts, including the Roush Yates Engines bits and it is now almost identical to the car that rolled into victory lane at Watkins Glen in August 2008.”

Ambrose said it was great to see the STP car in his home country.

“Winning that first race was pretty special and one I obviously remember quite well,” said Ambrose.

“It was just good to get a win on the board and we pushed on from there.

“I don’t get too emotional about old race cars, but it’s great that the car ended up in Crusher’s hands and that it has finally ended up back in Australia.

“The cool thing is that it is in almost identical shape to when we celebrated in victory lane with all the battle scars, especially the big one in the right hand door.”

The week prior to the victory, Ambrose had come close to his maiden win at the NAPA Auto parts 200 in Montreal when he got caught out by a thunderstorm and was sent sliding across pit road while attempting a pit stop, resulting in a black flag.

Despite a drive-through penalty, he fought back to finish third behind local hero Ron Fellows.

The year before he was set to win that race when he was taken out deliberately by Robby Gordon.

It all finally came together at Watkins Glen on August 9, 2008, and Ambrose led Kyle Busch, Matt Kenseth, Kevin Harvick and Dario Franchitti to the line.

He then lined up in the Sprint Cup race the following day for Wood Brothers Racing and finished third after driving from the back of the field after qualifying had been washed out.

Murray, who was living in the US at the time, attended many events with Ambrose that season, but was missing from Watkins Glen for the maiden victory.

“I was not at the race because I had booked a trip with some mates to the Knoxville Nationals sprint car event that weekend,” said Murray.

“We watched the race in the famous Dingus Lounge across the road from the Knoxville track and I shouted the bar when Marcos won the race.

“There were a million phone calls that day and then we continued to celebrate when Donny Schatz won the Nationals.

“I am just glad we have the car in absolutely original condition and that we managed to get it back to Australia where hopefully it will be eventually be enjoyed by locals fans either on track, in a collection or both.”

Qualifying for Round 4 of the BP Supercars Allstars ESeries gets underway at 18:00 AEST tonight with races at Circuit Gilles Villeneuve and Watkins Glen International.

CLICK HERE for a full gallery of the Ford Fusion