EXTRACT WEEK: The boyfriend was Bob

EXTRACT WEEK: The boyfriend was Bob 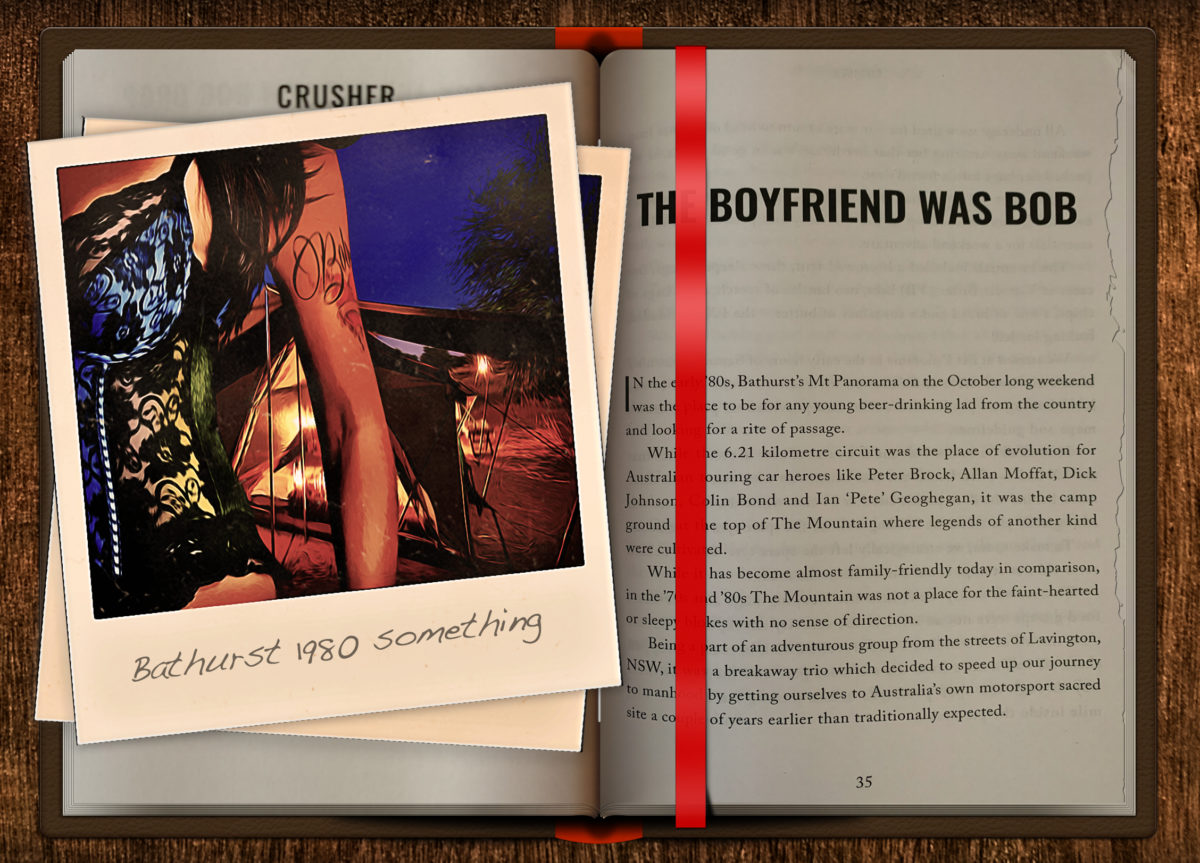 The boyfriend was Bob

Speedcafe.com continues to attack Coronavirus isolation this week by running a series of extracts from the autobiography of the site’s founder, Brett ‘Crusher’ Murray.

The remaining 100 copies of the book are being sold at a discount of $40 (inc Express Post) with 100% of proceeds going to Speedcafe.com’s charity, Motor Racing Ministries, buy your copy HERE.

In this chapter ‘Crusher’ looks at his first trip to the Bathurst 1000 where he and a mate “borrowed” his mate’s mum’s car as 15 year-olds and drove six hours to the race. He then woke up in the wrong tent, how did he know? – Read on.

In the early ’80s, Bathurst’s Mt Panorama on the October long weekend was the place to be for any young beer-drinking lad from the country and looking for a rite of passage.

While the 6.21km circuit was the place of evolution for Australian touring car heroes like Peter Brock, Allan Moffat, Dick Johnson, Colin Bond and Ian ‘Pete’ Geoghegan, it was the campground at the top of The Mountain where legends of another kind were cultivated.

While it has become almost ‘family-friendly’ today in comparison, in the ’70s and ’80s The Mountain was not a place for the faint-hearted or sleepy blokes with no sense of direction.

Being a part of an adventurous group from the streets of Lavington, NSW, it was a breakaway trio which decided to speed up our journey to manhood by getting ourselves to Australia’s own motorsport sacred site a couple of years earlier than traditionally expected.

All underage we waited for our mate’s mum to head off on her long weekend away, assuring her that her house was in good hands, as we packed her bags into a friend’s car.

Before her tail lights had dimmed three streets away, we had her own LX Torana backed-up in the driveway and packed with all the essentials for a weekend adventure.

The essentials included a borrowed tent, three sleeping bags, five cases of Victoria Bitter (VB) beer, two bottles of scotch, eight bags of chips, a loaf of bread and a container of butter – the LX was loaded, absolutely loaded!

We arrived at Mt Panorama in the early hours of Saturday morning after a six-hour drive and followed instructions from some of our local Lavington predecessors who had provided us pencil-drawn maps and guidelines.

First of all we had to hide the five cases of beer in every orifice that the LX had to offer. Under the rear bench seat took care of just three cases, behind the door panels another 24 cans while the final case was strategically placed in the holding well for the spare tyre in the boot.

What about the spare you ask? We strategically left the rear tyre hidden behind some old tree stumps about a mile down the road to make room.

The scotch easily went into the sleeping bags and the basic food groups were not an issue at the security checkpoint. Neither were the other two blokes I had travelled with because I dropped them off half a mile from the entrance gate and they made their way through the open paddocks before joining me another half mile inside the perimeter.

Once on top of The Mountain we had to pace our way through the hordes, dropping the odd burnout and donut to entertain them and earning our ‘right’ of entry.

Then came the challenge of finding our own remaining piece of hallowed turf to make our home for the weekend.

We managed to survive all that and a couple of riots over firewood.

To this day firewood is more valuable on top of The Mountain than a 10×8 bedroom shot of Margot Robbie from The Wolf of Wall Street.

We were looking good until we discovered that all three of us had the engineering ability of a drowning sloth. Luckily the box the tent came in had a picture on it and so we walked around until we found the same structure and woke up some bloke at 2.30am, offering him half a dozen VB cans to erect our accommodation.

The economy used to work a little differently on The Mountain.

Having survived a midnight arrival and several hours of meeting the ‘locals’ we eventually found our way back to our tent.

Qualifying on Saturday produced all the usual hijinks between the rival Ford and Holden fans and, as the empty-can pile grew larger and the firewood stocks lower, the natives became more restless.

Unfortunately I managed to take a wrong turn and wake up in the wrong tent.

I knew it was the wrong tent because I had never met the leather and laced young lady lying beside me and it went without saying that any such specimen on Mt Panorama was not looking to hook up with a 16-year-old kid from Lavington.

In fact, I had my suspicions that she had travelled to The Mountain with her boyfriend Bob – well unless she had exchanged partners since her last tattoo.

At any second I was expecting bad-ass Bob to come into the tent and land a solid right on my chin.

My worst initial fears were instantly realised, but instead of a closed fist I was met with a cold green can of Victoria Bitter (VB) and an invite to join his mates around the campfire – an enticing opportunity at a place which can head below zero at that time of the year.

VB was considered gold on The Mountain in the ’80s because the race was sponsored by Tooheys Draught and any other brand of beer had to be smuggled in.

As I got to the fire it was obvious I was in for a special treat.

It would seem that Bob was part of an exclusive group, so special that they all wore patched biker jackets, had matching beards, chrome-plated knuckles and Harley-Davidsons.

I was provided with my own personal deckchair and cheerfully encouraged to participate in the consumption of a bottle of Cointreau which was being passed in a clockwise direction from one tattooed forearm to the next.

I must admit the consumption of a French liqueur by a pack of 120kg bikers is not something I have experienced since.

The next thing I knew I was upside down in the dirt.

These tough c$%^s had knocked a 16-year-old kid out of deckchair for a bit of fun – or had they?

Not one for taking a backwards step, and determined to at least go down with a futile fight, I proceeded to throw my left fist which was swatted by one of my new friends.

I then followed with my right which was also caught by a member of the group, basically leaving me paralysed in their grip and expecting a serious hiding, or being used as a bit of penetrable entertainment for the rest of the evening.

It was at that point that Bob decided he would help me out.

“Settle down young fella, your shoes are on fire.”

With the reaction time of one of the pre-historic creatures featured in the Australian Fossil and Mineral Museum in Bathurst’s Howick Street at the bottom of The Mountain, I came to the conclusion that my new deep-dish Adidas sneakers had been turned into molten blobs of rubber around my feet.

I managed get through the following day’s 1000km race with my feet sitting in hollowed-out watermelons to provide some relief to the 360-degree blisters.

The watermelon was aided by the last stash of VB dragged out from behind the door panels of the Torana.

The same Torana that was driven at speed by three underage drivers back to Lavington the next day, just in time to give it a tub before our mate’s mum returned from her weekend away.
“Boys, I just can’t believe how clean this house is. And there I was, worried about leaving you here alone for the weekend.”

Unluckily, we forgot the spare tyre and had to buy one from a wrecking yard during the week, hoping like hell that our mate’s mum didn’t get a puncture in the meantime.

Footnote: It was just a couple of years later that I attended my first Bathurst 1000 as a journalist, and about 10 more when I promoted Peter Brock’s legendary last race at the venue in 1997.
That whole era of Australian motorsport is another book in itself with the battlefield of Supercars and 2-litre racing Bathurst really is one of the great ‘sacred sites’ in world motorsport.

‘Crusher’ looks at a road trip across America he did with two of his best mates, one of which just happened to be future Bathurst 1000 winner Paul Morris. How are they not still in jail? – you will have to read tomorrow’s extract to find out.