EXTRACT WEEK: There is only one reason I am doing this

EXTRACT WEEK: There is only one reason I am doing this 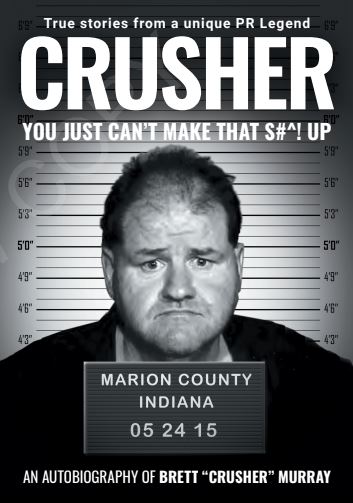 The remaining 100 copies of the book are being sold at a discount of $40 (inc Express Post) with 100 percent of proceeds going to Speedcafe.com’s charity, Motor Racing Ministries, buy your copy HERE.

In this early chapter “Crusher” sets the scene on how early he had planned to write his autobiography.

In 1988, having arrogantly quit the newspaper business and working my way out of a job running a pub for a couple of my ex-school teachers, I found myself pretty much on the bones of my arse at the age of 20, but fortunate enough to have Mum and Dad’s roof and fridge to fall back on.

I refused to go on social security benefits (so one day I could say “I have never been on the dole”) and ended up bouncing in a wine bar five hours a week (Thursday and Friday nights) for $50 cash in hand.

The bar was called Maudie’s and, under the new ownership of a local AFL football umpire Michael Quinlivan, had evolved from the local gay joint, to the only place in town open after midnight – hence the reason I worked from 11pm to 2am on a Thursday (the local pay day) and midnight to 2am on a Friday.

It was located at one end of Dean Street, which was the main drag in my home town of Albury, on the Murray River in New South Wales, Australia, about three hours north of Melbourne and six hours south of Sydney on the connecting Hume Highway.

Maudie’s was a melting pot of humanity where there was no beer or spirits licence; a place where you could sip wine, which was still an acquired taste for the country folk in 1988, cider and a milk-based Irish cream concoction called a “Shamrock” which was continually on pour from a bar-top mixing machine.

It was a place where school teachers, police officers, lawyers, politicians and media rubbed shoulders with bikers, drug dealers and pimps – and I mean rubbed shoulders, because when you are the only place in town at midnight there was only standing room available.

You could cook your own steak on a small grill in the corner and there was regular live music, with local soloist Andy Moore a favourite, especially when it came to an all-audience sing-along to his version of Don McLean’s American Pie.

I think I remember having performed a couple of Shamrock-fuelled duets with him.

At the end of each night part of my job was to help Michael clean up all the tables before we headed across the road to Sweethearts for a pizza.

I had a deal there, where I would cross over Dean Street and sort any issues they might have had with patrons during my shift and, in return, I would get a free Mexican pizza, whether I had to sort out a fight or not. I thought it was a pretty good deal.

The cleaning process involved grabbing a rag and an old dented steel IXL jam tin with the outside paper wrapper removed. I would fill this with slops and cigarette ash – no smoking laws in those days.

One night, after missing the jam tin and splashing an ashtray full of sour milk and cigarette butts on myself, I looked Michael directly in the face and snorted.

“You know the only fucking reason I am doing this?”

“So one day I can talk about it in my fucking book.”

I had not heard from Brett, for more than 25 years.

He left a message with my receptionist. When I saw the note, I could not believe it.

I rang him back straight away and when he answered the phone all I said was: “You are not writing the fucking book, are you?”

I had owned Maudie’s for about a year when Brett came aboard as “The Bouncer”.

Before that I knew him as a regular, one of the journos from the Border Mail newspaper who would come in and had their usual place in the corner.

Peter Thompson, an electrician, was the original guy on the door, but he unfortunately died in a workplace accident. Soon after, Brett fronted me and asked me if I wanted someone doing security.

I have no doubt there were ulterior motives for Brett. I am sure his rationale was that by being the bloke on the door at Maudie’s he would have first crack at the females coming in and the final crack at them leaving – two bites of the cherry. But I didn’t have a problem in giving him a go.

Brett was only about 20 then. Young, not much more than a kid really, but he looked a lot older. He wasn’t particularly big in stature, but he was fit and had a barrel chest and big shoulders. He also had that look about him that made you think twice, that maybe this wasn’t the bloke to mess with.

So he had a real presence about him and the longer he was at Maudie’s the more I liked the way he operated.

Brett brought a lot of personality to the role. I used to watch him work the room, walking around talking to people. A conversation with a solicitor, then two steps later a labourer, then a bikie. He knew how to talk to them all. He was always calm, never confrontational.

Maudie’s would get busy, really busy – maybe 300-400 people on a Friday night with a band playing. And the louder the music the more fights we would have. But overall we had very little trouble and I have no doubt this was largely due to Brett.

For instance, the local bikies would often come into the room. Brett knew them, especially whoever was their leader, and knew how to keep them under control.

Some of them were pretty nasty characters.

One bloke I remember was a real piece of work, would stick a knife into you as soon as look at you. But Brett knew how to handle him.

I guess he has always been a very good communicator, whether that was writing a story or talking to an aggressive drunk at one in the morning. He knew the right words. I never saw him arc up, but gee you knew when he was fair dinkum.

We became great work mates. We didn’t socialise a lot outside of Maudie’s, but every night there would finish with us walking across to Sweetheart’s Pizza for a few drinks, so we got to know each other pretty well.

Maudie’s was full of personality and personalities. Every person who walked through the front door had the potential to fire the place up, cause a fight or make you laugh. Brett knew them and could handle them. A great judge of character.

And yes, I vividly remember “the book” line. Something I will never forget.

Like Brett has said, it was after closing time and he was helping us clean up. Something he didn’t have to do, but that is just the sort of bloke he is.

I remember the brief outburst and the look of total belief on his face when he said: “This will be the first line in my book when I write it.”

TOMORROW: The boyfriend was Bob.

‘Crusher’ looks at his first trip to the Bathurst 1000 where he and a mate ‘borrowed’ his mate’s mum’s car as 15 year-old and drove six hours to the race. He then woke up in the wrong tent, how did he know? – you will have to read tomorrow’s extract to find out.