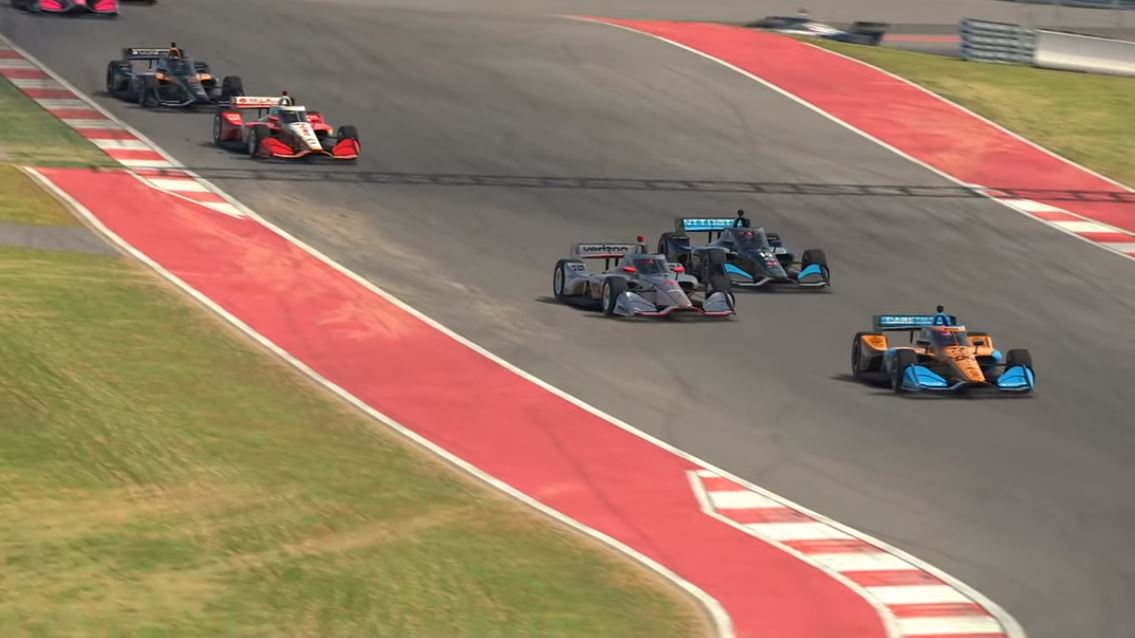 McLaren Formula 1 driver Lando Norris recovered from a mid-race spin to win the fifth round of the IndyCar iRacing Challenge at the Circuit of the Americas.

A wildcard entry for the event, Norris led the early stages before having to charge back through the field to take victory following his spin shortly after his first stop.

He led home Pato O’Ward and Felix Rosenqvist, the latter attempting the 32 lap race on just a single stop.

Norris led proceedings from the start, heading Power for the opening stint before diving to the pits on Lap 11.

Shortly after Norris’ stop the competition caution was waved, with Power pitting from the lead once racing resumed.

A turning point in the race soon followed as the Australian spun shortly after exiting the pits, before another lose while trying to recover that saw McLaughlin narrowly avoid him.

That handed the lead to Pato O’Ward.

With nine laps to run, and just as he’d reached O’Ward out front, Norris took to the lane for a second stop.

Rosenqvist then found himself out front only for the Swede to spin in the Esses, allowing Norris through.

Once back out front Norris held on to take the win, the charging O’Ward closing in on the McLaren driver in the final laps only to run out of time.

“Yeah was not easy at all, which was all done to myself,” Norris told NBCSN following the race.

“Obviously the spin in the second stint, but yeah it was a touch race, especially with Pato closing down with the new tyres at the end.

“I didn’t think I was going to get back to the lead so I was gutted.

Fourth for McLaughlin leaves him in with a shot at the series win heading into the final event at Indianapolis next week.

“It was a pretty big battle, and made a couple of mistakes, but stayed on the road,” he told fans on Twitter following the race.

“Really excited, next week we head to Indianapolis for the final round of the Indycar Challenge.

“I think on unofficial points standings I think we’re right there in the fight for the champions, but obviously it’s not official.

“You always want to chase something and I’m really excited. Indianapolis is going to be fun.”