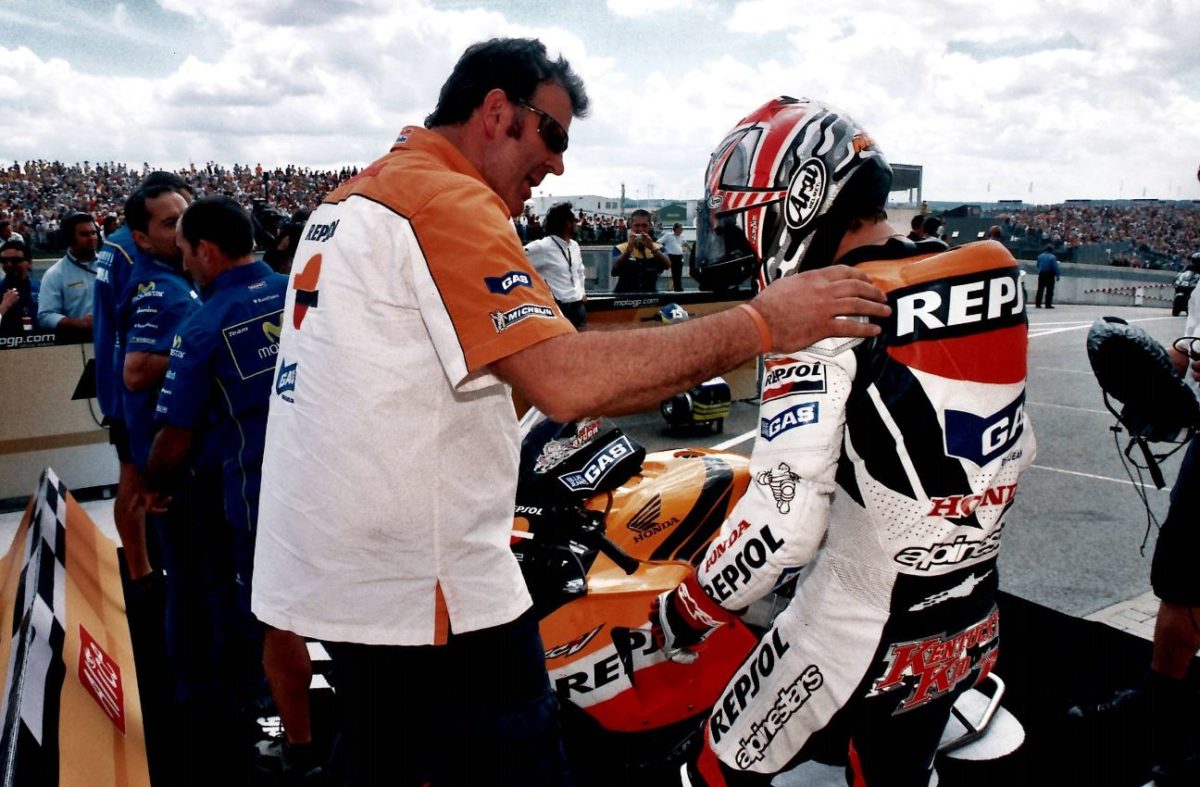 Two of the most memorable days in the life of former MotoGP motorcycle mechanic Dick Smart directly involved talented US rider Nicky Hayden.

Smart is one of the most successful spanner men in the history of GP racing having won five consecutive 500cc world championships with Mick Doohan and three with Valentino Rossi between 1994-2003.

In 2004 Smart had a season with Alex Barros when the Brazilian he joined the Repsol Honda factory team and a year later he found himself working with Hayden.

The ‘Kentucky Kid’ had joined Honda in 2003 as Rossi’s teammate after winning the American Superbike Championship and finished fifth in his first season to earn rookie of the year honors behind his championship-winning team-mate.

The following season Rossi moved to Yamaha and Smart was linked with Honda newcomer, Barros.

While chief engineer Jeremy Burgess and a couple of others followed Rossi to Yamaha, Smart stayed put to work with Barros who finished fourth in the championship.

In 2005 Max Biaggi replaced Barros and Smart moved over to Hayden’s bike and the American started to make some real progress, including his breakthrough win at his home Grand Prix at Laguna Seca in California.

Hayden was one of the few riders in the field that had raced at the track before and he used his knowledge to clinch pole position by 0.354 of a second from Rossi.

Australian Troy Bayliss, Rossi and American Colin Edwards had a cracking battle for the minor placings after Hayden established a one-second lead on the opening lap of the race, which he extended when needed.

While it was Hayden’s first MotoGP victory, it also broke a drought for the Honda factory team which had not won a race since the last round of the 2003 season in Spain.

“I think we definitely had a beer that night,” Smart told Speedcafe.com of the Laguna Seca victory.

“It was definitely one of the better ones to win with it being Nicky’s home race and all.

“It was probably one of the most memorable races of that era and it was nice for us to win again, because it had been a while.

“Nicky was a laid back kid with a great family and we used to have a lot of laughs, especially with his old man Earl.”

That was the only victory for the season, but Hayden did finish with five more podiums for the year and finished third in the championship.

Despite making progress with Hayden, Honda had made a decision to replace Biaggi with Dani Pedrosa and the employment of the Spaniard and his requested team manager Alberto Puig was going to soak up the needed funds to keep someone of Smart’s experience around.

Smart moved back to Australia to be with his partner, Shanelle and his daughter, Helana, and son, Tommy, who were both under the age of three.

“The decision to stay or come home was really made for me,” said Smart.

“But at the end of the day, I had done what did for 16 seasons and it was time to come home anyway with the family and everything.”

While Smart ended up in a team manager’s role for Team Kiwi in the Supercars championship out of Paul Morris Motorsport in 2006, he did keep a keen eye on the MotoGP championship which Hayden clinched by just five points from Rossi.

In his 16 years at the highest level, Smart had only worked with four riders, with Hayden being the last.

So the phone call he received on May 17, 2017 that his former rider had been knocked off a push bike while on a training ride in Italy and was in a coma was one of the toughest he had ever taken.

The news was worse five days later when Hayden died as a result of his injuries, leaving the motorcycling world in shock.

Motorcycle racing is a sport that breeds them tough and that’s why Smart lasted as long as he did and was as successful as he was, but even he gets a slight lump in his throat and a pause in his answers when quizzed about ‘The Kentucky Kid’.

“Yeah…… that was not a good day when I heard that news,” Smart said of receiving the news of Hayden’s death.

“He was just a nice guy and it was just an unfortunate accident.

“You know, all the bloody crashes he’d had in his life, not just in MotoGP, but his racing career and he gets cleaned up by a car in Italy on a pushbike?

“It’s still hard to believe it happened, you know?”

Nicky Hayden was posthumously inducted into the AMA Motorcycle Hall of Fame in 2018.