Dick Smart grew up in New Zealand where he started a mechanical apprenticeship with the local Holden dealer before moving to Australia to work in the bike scene.

In 1989 he moved to Europe to work as Mick Doohan’s truck driver before becoming his mechanic for all of his five 500cc championships.

He rode all highs, but also the lows which included Doohan’s 1992 crash and his 1999 accident which eventually forced his retirement.

While Doohan’s run in 500cc was over, Smart’s run of success wasn’t.

While Doohan’s crash happened in the May, there was no official announcement of his official retirement until after the Australian Grand Prix at Phillip Island in October.

“I didn’t really know it was over until he (Doohan) really said, ‘I’m going to retire’,” Smart told Speedcafe.com.

“You were always hoping he was going to keep racing, because age wasn’t a factor.

“And it was just up to him whether he wanted to put his body through it. It was a decision he had to make and he made it himself.

“I remember him doing a demonstration lap at Phillip Island and someone said his lap time would have put him something like sixth on the grid.”

As the 1999 season wore on the name of Valentino Rossi started to drift around as a possible replacement for Doohan if he was to hang up the helmet.

The young Italian had won the 125cc world championship in 1997 and was on his way to winning the 250cc title – the kid was good, real good.

“Valentino’s name was constantly being mentioned as Mick’s replacement and that was an exciting prospect,” said Smart.

“What a replacement he turned out to be. It was a match made in heaven.” 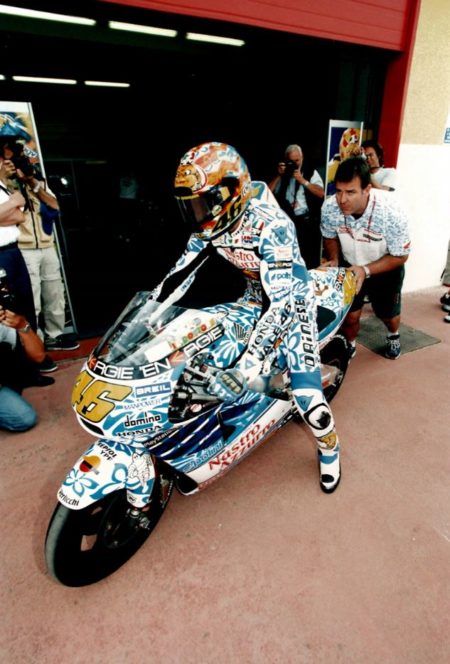 A Honda satellite team was formed for the first two years of Rossi’s move which was sponsored by his Italian supporters Nastro Azzuro and Doohan was provided a senior management role by the manufacturer.

Australian Jeremy Burgess remained boss and Smart the lead mechanic, but the step up to the pinnacle of GP racing didn’t exactly go to plan with Rossi crashing out of the first couple of races.

“Well those 500s were not an easy thing to ride and there were not too many guys that could master them,” said Smart

“He was just a young kid trying his guts out.

“We knew he had talent because he had the 125cc and 250cc trophies, so it was just a matter of him working it out personally.

“The bike was probably built for Mick too and maybe it didn’t suit him 100 percent but he adapted himself and Honda made some changes and before long he was on it.

“We were a satellite team for those first couple of seasons, but we had the factory gear.”

He was on it alright, Rossi finished on the podium 10 times in the remaining 14 races, including a maiden victory in the British Grand Prix in Donington and then in Rio before finishing third in Australia to lose the title by 49 points to Kenny Roberts Jr.

The following season Rossi won 11 times and it was the last time that an official non-factory rider won at the highest level of the sport and was also the final year of 500cc competition before the introduction of the four-stroke MotoGP bikes.

“I remember in the beginning there was probably a little bit of negativity when we heard the four strokes were coming in,” said Smart.

“They were saying things like we would be throwing engines at them after every session and that our workload would increase significantly, but as it turned out we had to eat our words.

“They were a very reliable engine and produced a lot of horsepower and were a good bike to work on.

“We had a computer guy that looked after the telemetry and we would look after chassis and suspension changes and pull the gearbox out and change the ratios basically.”

In 2003 Rossi led Burgess and Smart back to the official Honda factory team and won the first race of the new MotoGP era in Japan and then won another 10 to clinch the championship with four races remaining.

“That year we just got the snowball rolling again and it sort of picked up from where Mick left off and it felt real good,” said Smart.

Rossi again dominated and finished off his third championship in style by winning the last three races of the season, including the penultimate round at Australian Grand Prix at Phillip Island where he was given a 10-second penalty for passing under yellow and still took the win by 15 seconds.

“That was a significant win,” said Smart.

“If you look at how races are won these days, I don’t think you’ve probably seen too many races where someone has won by that far.

“Old (Jorge) Lorenzo or someone like that may have won by a few seconds, but not by 15 after getting a 10-second penalty.”

Rossi would cap off the season with a victory in the final round in Spain two weeks later in what would be a significant result for many reasons.

It was his last victory for Honda and it would be the last time Smart would be a part of a winning combination for sometime.

Rossi announced a new deal with Yamaha for the following season and while Burgess would move with him, there was not a spot or the budget for Smart.

“I’d been asked to go, at the end of the day, what happened?,” questioned Smart.

“JB (Burgess) told me they wanted to take all the team.

“But there was this Kiwi guy called Brent Stephens already working for Yamaha and they wanted to keep one guy who was familiar with the machinery.

“Unfortunately that probably knocked me out. Who made the final decision? I don’t know.

“It was a little disappointing, but I still had a job at Honda.

“I kept a good relationship with all those guys even though they were in a different garage. I probably went to more Yamaha team dinners than Honda team dinners to be truthful. 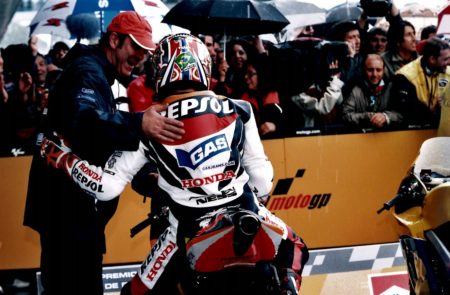 Smart worked with Alex Barros the following season without a win, while Rossi won the title.

“Alex (Barros) was a great guy and had a great personality.

“He was a good rider, but a bit prone to crash because he was all or nothing type of guy.

“It was a tough year because you come from winning everything to sort of running top five.”

In 2005 Smart moved on to the bike of Nicky Hayden who was on borrowed time after a couple of lackluster years with the Honda factory team.

As it turned out, Hayden’s maiden victory in front of a home crowd in round eight of the 16-round championship at Laguna Seca in California would be the last of Smart’s career.

Hayden, who Smart had a solid relationship with, did not get back on to the top step again that season, but still managed to finish third in the championship.

“Yeah, I think we definitely had a beer that night,” Smart told Speedcafe.com of the Laguna Seca victory.

“It was definitely one of the better ones to win with it being Nicky’s home race and all.”

At the end of that season there were more moves at the Honda factory team that basically left Smart without a job.

Despite Smart and team making the progress with Hayden, Honda had made a decision to replace Max Biaggi with Dani Pedrosa and the employment of the Spaniard and his requested team manager Alberto Puig was going to soak up the needed funds to keep someone of Smart’s experience around.

Smart moved back to Australia to be with his partner, Shanelle and his daughter, Helana, and son, Tommy, who were both under the age of three.

“The decision to stay or come home was really made for me by Honda,” said Smart.

“It was a bit disappointing, but at the end of the day, I had done what did for 16 seasons and it was time to come home anyway with the family and everything.

“I didn’t really look around the paddock for another job.

“I did miss aspects of it, but I didn’t go into a full meltdown or anything because I wasn’t there anymore.

Incredibly he had just one win in his first 30 races with Doohan and just one in his last 32 with Barros and Hayden.

Smart ended up in a team manager’s role for Team Kiwi in the Supercars championship out of Paul Morris Motorsport on the Gold Coast in 2006 and worked with fellow Kiwis Paul Radisich, Fabian Coulthard, and young Australian Alan Gurr.

At the same time he did keep a keen eye on the MotoGP championship which Hayden clinched by just five points from Rossi.

In the meantime, Doohan had set up an aviation business and in 2007 Smart took up an offer to join him. 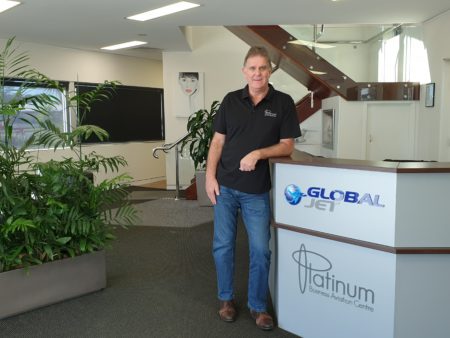 Smart in his current role

Just like in the early 90s, Smart started in a servicing role for Doohan, but has grown with the business and is now the Aviation Manager for Platinum Business Aviation and Global Jet based at the Gold Coast Airport.

He handles charter flights, corporate aircraft, hangarage, medivacs, and everything else that goes with a Fixed Based Operation (FBO), which now has a second base at Essendon Airfield in Melbourne.

Doohan has a reputation for being an amazing business networker and works hard on the sales side of the operation.

He is as tough in business as he was on a 500cc bike, but for Smart it was just like putting the band back together.

“He speaks his mind and tells me if he wants something done and it’s vice versa.

“He spends a lot of time in Europe racing with his son Jack so we’re on the telephone regularly.”

And how has the Coronavirus Pandemic affected the business?

“Up until this week we really have been flatout,” said Smart.

“We’ve been moving plenty of people out of the country mainly.

“The Easter weekend we had a medivac from Sydney to Cambodia which then turned into another job out of Russia to Japan.

“There is a lot to be done when you are trying to get the logistics and clearances together for those types of situations.

Smart admits he is enjoying life away from the MotoGP circus, but cannot help but keep an eye on what’s going on in motorsport both locally and internationally.

“I watch a bit of Supercars if I’m home and it’s on TV and I will watch an F1 race if I luck out and it is the right hour of the night,” said Smart.

“I still enjoy watching MotoGP, but I pick and choose what I think will be good races.

“My winters are really taken up with Tommy’s rugby, although that has been put on hold so far this year.”

In some ways the generation clock has turned full circle with Broc Feeney, the son of old racing pal Paul Feeney, forging his own path to a successful Supercars career.

While Tommy is more at home on the rugby field, he recently acquired a racing simulator and has developed a strong second-generation friendship with Broc, who has successfully come through Paul Morris’ Racing Academy at Norwell on the Gold Coast.

“Broc’s success has been terrific to watch and really gives me fresh interest,” said Smart.

“Him and Tommy have become good friends and I don’t think it will be too long before we get Tommy out to Norwell for a few laps.”

Just when things should be slowing down, things might be going to get a whole lot busier for Smart.