WHERE ARE THEY NOW: Allan Moffat

WHERE ARE THEY NOW: Allan Moffat 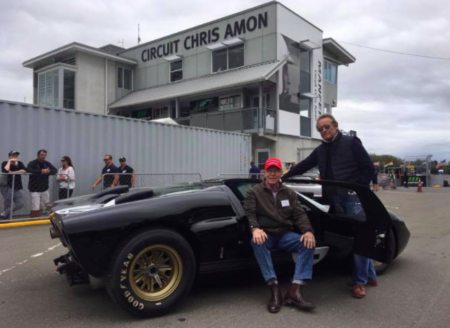 Amid the saturation reporting of the cancelled Australian Grand Prix in March, one of Allan Moffat’s most important assignments flew under the mainstream media radar.

While both are extremely successful former racing drivers they also share an altogether not widely known common link. Moffat suffers from Dementia, the same insidious disease which has struck Stewart’s longtime wife Helen for quite a few years now.

During GP week, Moffat and Stewart were both made ambassadors for Dementia Australia with the aim of driving more donations and awareness in order to find prevention and a cure for the condition.

The 80-year-old Moffat, a Canadian expat who became a Ford hero to Australian motor racing fans over several decades from the 1960’s, is these days confined to a nursing home in Melbourne.

The nursing home went into lockdown amid the COVID-19 outbreak which has limited Moffat’s normally busy daily routine.

For the last five years Moffat has been provided with full-time assistance from friend and manager Phil Grant who carries out a profoundly noble but challenging job of keeping the legendary racer active and in the spotlight of the wider motor racing community.

Grant, who is a lawn bowls greenkeeper by profession, has played a crucial role in helping Moffat through his debilitating disease over the last few years.

“Jackie Stewart and Allan have linked up with Dementia Australia as well as Allan’s charity Race Against Dementia,” Grant said.

“And there was a scheduled 500-seat charity dinner for Dementia but that was cancelled when the grand prix was called off.

“We had a big signing and announcement about this with a photo opportunity but none of it really got out in the mainstream media because of the grand prix being cancelled which stole all the headlines.”

While Grant takes charge of Moffat’s appearances and well-being these days, the former racing ace also has a network of key people in his corner which includes Larry Perkins who acts as Moffat’s administrator.

“I got asked by Fred Gibson five years ago to help Allan out because Moff had sold his factory at Malvern Road which he had for years and he was at a bit of a loss.

“So I initially took over the memorabilia business which had been lying idle for a few years and it took a few years to get things going.

“We bought out a couple of model cars with Tickford including a Coca-Cola Mustang.

“Every day I pick Allan up and we go out to lunch after I tend to my bowling greens and we basically do something regularly that keeps him occupied.

“Although that is a challenge now with this virus crisis as Allan’s nursing home is off limits.”

In recent years Grant has taken Moffat to America on a couple of racing trips and to New Zealand where the former Canadian was reunited with his Bathurst winning co-driver from 1977, the great Jacky Ickx.

“At that time I had hatched a plan to get a re-enactment under way from that 1977 form finish of the two XC Falcons for Bathurst in October 2017,” Grant explained.

“We had Alan Hamilton and Colin Bond who were in the second-placed XC and with Ickx coming out we had the complete set of drivers.

“But for various reasons we just couldn’t pull it off.

“However we went to Mansfeild and spent the day at the NZ Grand Prix meeting with Jacky as corporate guests.

“Through that meeting it was clear that Jacky didn’t have a lot of interest in coming back anyway for a re-enactment for probably what he feels is the worst car he ever drove.

“And there was no money to do it. Supercars didn’t really want to embrace it.

“But that year (2017) was a big year. I organised the #2 XC Falcon coupe to go down to Bathurst from Bowden’s museum at Buderim to join the #1 XC.

“That was the opportunity we had to stage the form finish with all the drivers but it didn’t come off unfortunately.”

The previous year Grant had the opportunity to escort Moffat to Monterrey for the annual Pebble Beach concours and the speed week celebrations.

“It was a surreal situation because we not only caught up with Jacky Ickx but also with Brian Redman, Dan Gurney, David Hobbs, and Bob Bondurant,” said Grant/

“It was an eye-opener for me because I was thinking a few people maybe would know Allan but hell, everyone did.

“Jochen Mass (ex-F1 and sportscar ace) sang out to Allan across the pit area one day.

“And there you have the crossover because all those years ago Mass, Moffat, and Jackie Stewart all drove Ford Capris and so there is an instant link there.

“You don’t realise how intertwined it is even though we are talking about drivers in different categories, racing in different continents albeit around the same era.

“It just blew me away because all these people knew Allan from all those years ago.”

Grant is unwavering in his 24/7 dedication to Moffat, whom he says still gleans tremendous joy out of being around racing people and competition cars. 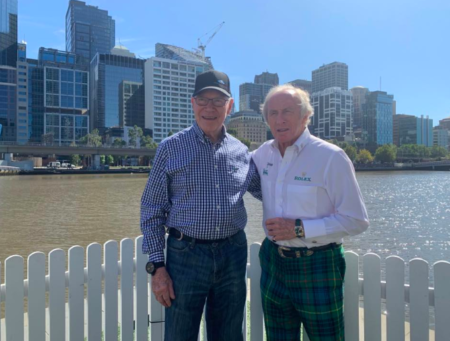 “With his Dementia we just try to keep him active and in a routine if we can.

“It’s not easy sometimes but I can see that it does Allan the world of good.”

In early March, Perkins raced his VY Commodore V8 Supercar at Phillip Island with Moffat helping out in the garage.

“We took Allan to the historic meeting which had a mix of classes across many different eras,” Grant said.

“It was over three days and Larry was competing in his Commodore and Allan was really enjoying being involved in the whole weekend, helping out where he could.”

“It keeps him in a happy place and that’s enough for me.”