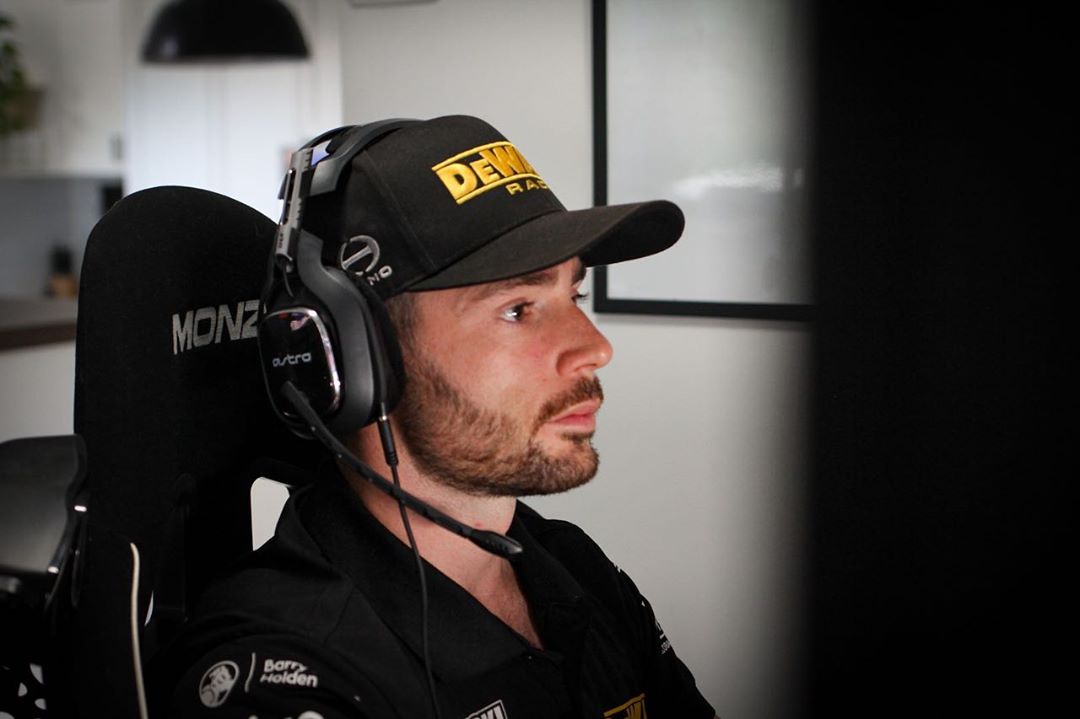 DeWalt Racing driver Scott Pye is encouraging fans to ask him anything in a Q&A following each round of the BP Supercars All Stars Eseries via Twitch.

Pye began showing the Eseries races from his point of view via video streaming service Twitch, which allows fans to comment in real-time during broadcasts.

Following each round of the Eseries, Pye has stayed online to allow fans the chance to ask questions about Supercars and non-racing related topics.

After each round, Pye has stayed on for over an hour after the completion of racing to talk about his Supercars career, other sporting codes, and his day-to-day life.

Speaking with Speedcafe.com, Pye said he’s been blown away so far by the reaction and hopes more people join the discussion.

“There were that many questions coming through while I was driving I couldn’t actually get to them all,” Pye said of when he began streaming.

“So the first night in the Eseries I stayed back to answer the questions I missed and they just kept coming.

“I was really enjoying it so I stuck around the first night for over an hour after the race finished.”

“I’ve done that every night since. It’s not a formal thing, but I am going to continue doing it just because I’m enjoying engaging with everyone.

Pye said the Twitch streams give fans a chance to understand some of the relationships between drivers away from the circuit.

“I look forward to going live and having some banter with the public and also letting them listen to us drivers as mates,” he added.

“Shane (van Gisbergen) jumps on my Twitch just to wind me up and give me the shits while I’m driving,” he joked.

“People find it funny, it gives them a bit more of an insight into some of our relationships that they probably didn’t realise were there.”

Pye hasn’t been the only driver to take up streaming with the likes of Scott McLaughlin, Chaz Mostert, Anton De Pasquale, and several more giving fans unfiltered coverage of the racing.

During each of his streaming sessions, Pye has been getting thousands of views and comments in the races.

He said the Eseries has given Supercars fans a new way to engage with drivers with unprecedented access through streaming.

“What I think Supercars has done really well is give us a platform that can still give our fans something that they want,” said Pye.

“It’s something that they can enjoy and have fun with. The racing isn’t the entire show. It’s about engaging with people and having a laugh together.

“During the race I’m reading the comments, I’ve got them on my screen and am actually really enjoying the banter between the races.

“To be actually racing and chatting to the fans during the race is something I’ve never done before and never been able to do before.

“At the moment it’s about getting as much enjoyment as possible to people in a tough time, so my Twitch is all about having fun and having a laugh.

“We get to go racing. They still get to see their favourite drivers and get their enjoyment out of Supercars in a different way.

“We’re in a position where we can give people an insight into what we do.

“We can talk about what we do and we can interact with fans on a completely different level that we’ve ever been able to do before.”

“I’ve actually found it to be a good way for me to switch off and block out things that might be happening in the real world,” he explained.

“I’ll still stream and do a regular Q&A on Twitch, that’ll be how I continue my interaction with the fans going into the future when we get some normality.”