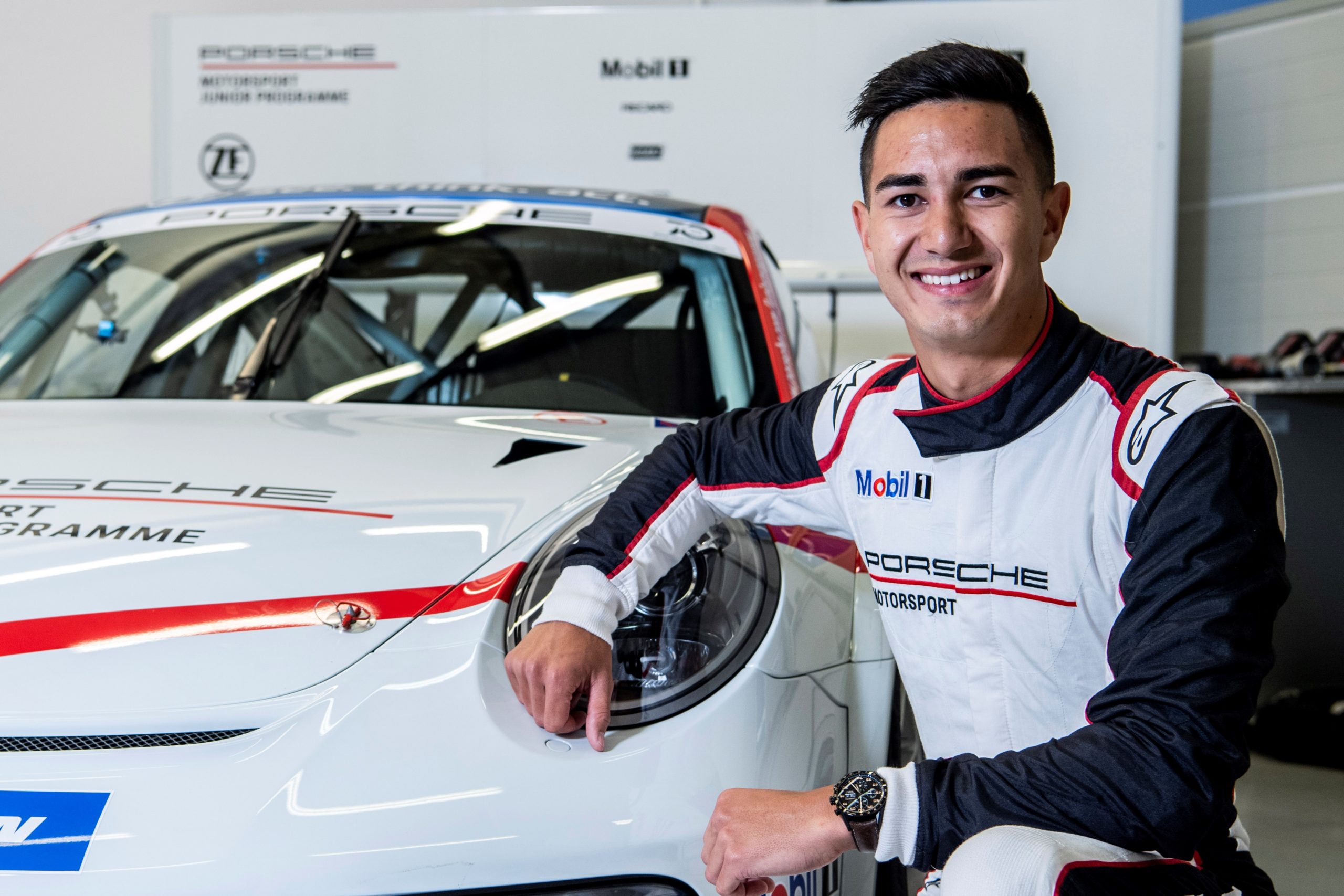 Jaxon Evans’ meteoric rise up the Porsche pyramid is a journey inspired by his family’s motor racing roots.

Evans’ motorsport family makeup stems back to his grandfather and grandmother Rob and Wendy Lester who were founding members of Manfeild Circuit Chris Amon.

Built in Feilding, a small town south of Palmerston North in New Zealand, Rob and Wendy Lester opened the circuit in 1973 and began a motor racing dynasty in the central North Island.

At its height, the circuit hosted the World Superbike Championship and is now home to the New Zealand Grand Prix.

Rob and Wendy had children of their own, Debbie and Richard.

They went on to race Formula Vee as Rob had before them; Richard in the late 1970s and Debbie in the mid-’80s.

Debbie was an accomplished Formula Vee and Formula Ford racer in her time, often a familiar fixture on the podium. However, she eventually stopped racing and later married John Evans.

“Motorsport was in my family from birth,” Evans told Speedcafe.com.

“Mum used to race. Even though she never raced when I was alive, it was always something that we’d sort of see photos of and things like that.

“It’s still quite cool to hear the stories and see photos of when she was racing because, I guess, even now females in motorsport aren’t a big thing, which is continuing to grow.

“Even more so back then she would’ve been one of the only females, I guess, in the southern hemisphere, if not the world, that was racing and doing it competitively.”

As the years went by Jono Lester was born and five years later Jaxon Evans came along. 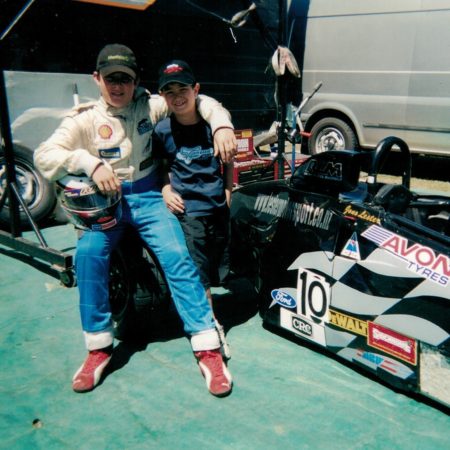 By the time he was 16 years old, Jono had become the youngest race winner in a Porsche GT3 Cup series globally. All the while Evans was watching and wanting a piece of the action.

“I remember growing up, going to the racetrack, and watching my cousin Jono racing from a young age,” Evans recalled.

“When Jono started, it was sort of like he was my idol and then that just made me want to be a racing car driver.

“Even at the time, he was just a teenager so it was almost like I could kind of see myself at that stage.

“He was kind of like a big brother, you just want to do everything that they do because they make it look cool.

“It was something that sort of had me hooked from the very beginning and although I didn’t start karting until the age of 12, I was always passionate about motorsport.”

Initially, it was a father-son hobby and not something they were taking seriously, but that soon changed.

The final two years of his fleeting karting career saw him move into top-level KZ2 shifter karts and challenging for the national titles in Australia and New Zealand.

“I still remember the first laps that I did in a kart, it was such an adrenaline rush,” he said. 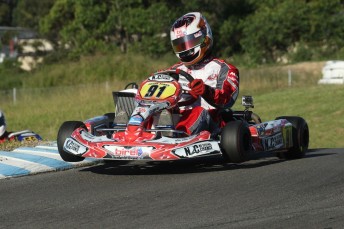 “We were never trying to race for a championship or things like that. It was more a case of if we had the time to do it.

“It was a good hobby that we had for a couple of years, nothing super serious, but obviously I always wanted to win and so did Dad.”

John Evans and Andy McElrea had known each other for decades. John used to be a mechanic for Andy when he raced in the New Zealand Formula Ford Championship, a title Andy won.

The McElreas had three generations of races themselves in Rod McElrea, Andy, and his son Hunter.

By the time Jaxon was looking to make the move into car racing, Andy’s successful team, McElrea Racing, had been running for nearly 10 years.

He’d run the likes of Scott McLaughlin in Mini Challenge and several more successful names in Porsche Carrera Cup Australia among other categories. 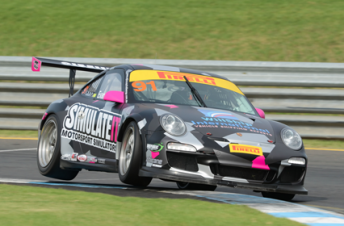 Porsche racing was where McElrea had focused. Despite the fact Evans had no car racing experience under his belt, McElrea slotted the teenager into a Porsche 911 GT3 Cup car.

“I learnt so much in the last few years that I did in karting, racing in KZ2, that it was sort of fundamental for me when I made the jump into a Cup car,” said Evans.

“It’s not the most conventional pathway, most kids don’t get out of the kart and get into a car with just over 400 horsepower, so that was a bit of a jump.

“I was lucky enough through Andy that we had the opportunity one day just to come out to Queensland Raceway and drive it.

“To be perfectly honest, I had no idea how I went at the test because there was no pressure, it was about just seeing what it felt like to drive a car on a racetrack.

“I think I was 17 at the time, all smiles and just loving it,” he said of his first drive.

“I think we ended up going half okay and that’s when we sort of decided to bite the bullet and try to make that next step and sort of self-funded ourselves for the first year of Cup Challenge.”

Evans’ success in Australia thereafter has been well documented. He narrowly missed out on winning the Porsche GT3 Cup Challenge in his debut season but won nine of the 18 races. 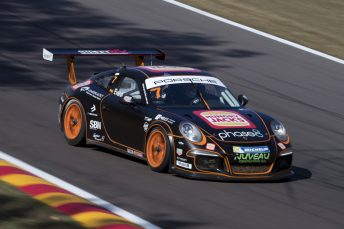 The step up to Porsche Carrera Cup Australia came in 2017 where he shone on debut by scoring a podium in his first race at the Adelaide 500.

It was a year that saw him claim five wins on his way to fifth in the championship behind Dale Wood, Andre Heimgartner, Alex Davison, and Nick McBride.

Championship success was forthcoming in 2018 and duly netted Evans a chance to contest the Porsche Scholarship Shootout.

In just three years Evans had gone from car racing rookie to standing at the door of a factory-supported drive in Europe with one of the big names in world motorsport.

Despite having won the Porsche title in Australia, Evans believed he was the underdog going into that ultimately successful shootout.

“Another driver from Australia was nominated to go as a wildcard and I knew that that was a call from Porsche in Europe” he said.

“Already then I felt like I was kind of on the back foot even though I had won a championship.

“Then there were a couple of drivers that came straight from the last round of Supercup to the shootout. So they were familiar with Porsche’s staff and they’d both had some good results.

“I knew that it was one of the main stages of my career where I really had to dig deep and believe in myself and just do what I knew that I could do in terms of driving the car fast and handling myself off track as I knew they weren’t just looking for a fast driver. 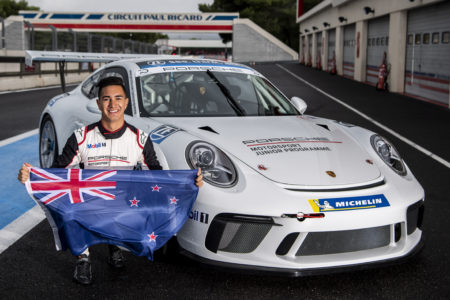 Evans won the 2019 edition of the Porsche Scholarship Shootout

“It was certainly a tense few days that we were there, but at the same time, I just tried to have fun with it.

“I knew that I was certainly no worse off for going to the experience and if it was right for them to pick me, then I would be selected.

“That was certainly the highlight of my career receiving that phone call to be told that I was the Porsche Junior for 2019.

“It was a pretty special year 2018 winning a championship, but I think that was definitely the highlight.”

Evans’ first season of racing abroad was by his account a steep learning curve.

With no experience on any of the European circuits and seemingly out of sync with the race weekends, his results yo-yoed. As a result, he battled with self-doubt.

“It’s super high intensity from the day that you arrive at the track and it’s weird because everything’s so intense, but you have such long wait times in between everything,” he said.

“So I guess it was just a combination of me trying to feel comfortable in my new home in Germany, plus trying to deal with the pressure that I was putting on myself.

“Then also the pressure from Porsche. You’re this guy that comes from a small country at the bottom of the world, over to Europe, so you’ve been given this title as the Porsche Junior and everyone expects you to be on the front row with the other Porsche Junior from day one.

“I struggled personally a lot with that, because I felt like if I wasn’t performing then people didn’t think I deserve to be where I was.

“And then it sort of felt like if I kept having a string of bad results that Porsche were like, ‘okay, well why did we pick this guy when both Ayhancan Güven and Larry ten Voorde were also at the shootout’,” Evans said of the Porsche Supercup front-runners. 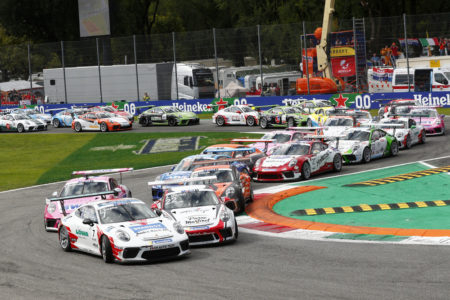 “But we got to the midway season of the year and I had my midseason review with Porsche and they basically said that they picked me for a reason, I was on the same level and I just need to get back to performing at that level.

“That certainly was a big change in focus in the way that I thought about each race weekend.

“And once I was able to sort of clear my head mentally, then we started to achieve some better results and show that we did deserve our spot there and I was lucky enough to be rewarded with another shot for this year.”

Long-term, Evans wants to make a living with Porsche. Ultimately, racing in the 24 Hours of Le Mans is his goal and believes he’s in the best position to make that happen.

“Everyone knows that Porsche really look after their drivers, especially when they’re at a works status,” said Evans.

“And from all the talk that I’ve heard around the paddock, is that Porsche is the manufacturer that everyone wants to race for in terms of GT3 racing or GTE racing.

“For me the goal is to stay with them longterm and hopefully I can progress out of the cup car soon and into some GT3 racing and then hopefully in the future race with the likes of Le Mans in a GTE car.

“That’s the ultimate goal and it’s something that I’ll continue to keep working for until it either becomes a reality or it doesn’t come through at all.

“I’m in the best position I can be in a moment as a driver that’s trying to make a career out of motorsports. So I just got to dig deep and hopefully it’s enough in a few years time.”