Van Gisbergen holds off Kostecki to win at Mount Panorama

Van Gisbergen holds off Kostecki to win at Mount Panorama 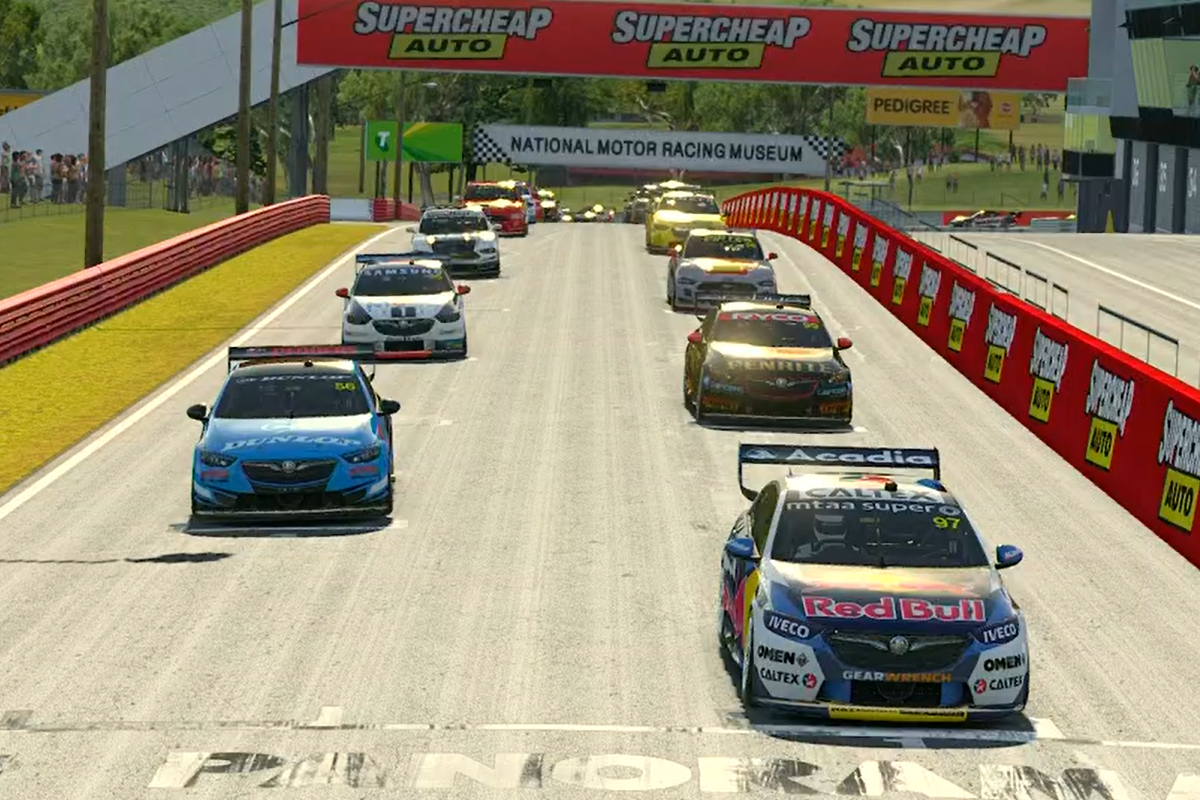 Shane van Gisbergen has claimed Race 8 victory in the BP Supercars All Stars Eseries, holding off a spirited challenge by wildcard Brodie Kostecki.

Kostecki tried to execute an undercut on van Gisbergen with a Lap 2 pitstop, but the Eggleston Motorsport driver was caught in traffic.

It was a clean start for the Red Bull Holden Racing Team front-runner who got the holeshot into Hell Corner.

The front group all slotted in behind each other and ran line astern into the first corner, but there was chaos further behind.

Nick Percat was an early victim of the Lap 1 melee as was Bryce Fullwood who sought to take evasive action and slapped the wall. Rick Kelly got turned around as did Jamie Whincup.

A strong exit out of Turn 1 allowed Kostecki to get the slipstream up Mountain Straight. He duly put pressure on the race leader through the first few corners, but a pass wasn’t forthcoming.

There was carnage at the end of Lap 1 after Will Power, Andre Heimgartner, Chaz Mosert, and Scott McLaughlin tried to go two-by-two into The Chase.

McLaughlin got on the grass and nudged Power who in turn got into the back of Heimgartner who hit Mostert too. McLaughlin was the only driver to stay on the road, the rest off in the grass.

Power and Heimgartner duly pitted with damage to their cars for a quick fix. McLaughlin was duly handed a drive-through penalty for the incident but.

At the end of Lap 1 it was van Gisbergen who led Kostecki, De Pasquale, McLaughlin and Randle.

Lap 2 saw David Reynolds spin out of Hell Corner and nose dive into the concrete wall. He eventually finished a lap down.

At the end of Lap 2, Kostecki came to the pit lane to complete his compulsory pit stop in an effort to execute an undercut. However, he was baulked by Alex Davison up Mountain Straight.

McLaughlin came to the pit lane on Lap 3 for his first stop confused as to whether he had a penalty or not.

At the end of Lap 4, both van Gisbergen and De Pasquale completed their pit stops.

Once the round of pit stops were completed it was still van Gisbergen who led Kostecki and De Pasquale.

Further behind, McLaughlin was fourth but hadn’t taken his drive-through, Randle was sixth, Mostert seventh, Fullwood eighth with the Team 18 duo Scott Pye and Mark Winterbottom ninth and 10th.

McLaughlin finally pitted on Lap 7 to complete his drive-through penalty. He returned to the field and was put straight into a battle with Pye and Fullwood.

McLaughlin got the inside line into Turn 2 and cast Pye out wide. The Dewalt Racing driver then went side-by-side with Fullwood through the Cutting but managed to hold position.

As Kostecki’s tyres faded, van Gisbergen edged away and cruised across the line to take a comfortable win ahead of the wildcard.

De Pasquale completed the podium with Randle and Mostert the top five. Power was sixth and McLaughlin managed to recover to seventh.

There was late drama between Pye and Fullwood on the last lap that dropped them down to 14th and 15th respectively.

As a result, Winterbottom got eighth, Jones ninth, and Percat completed the top 10.