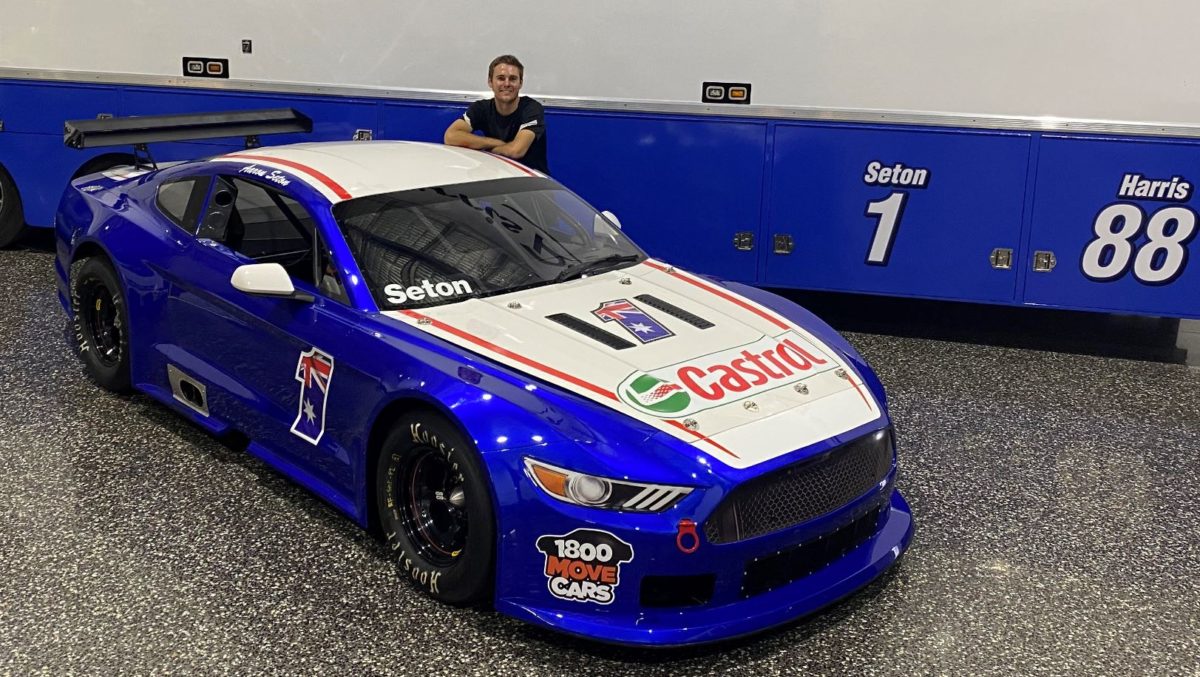 Aaron Seton with his Harris Racing Trans Am Mustang

Aaron Seton is enthused by the swelling interest in Trans Am racing as he looks to use it as a stepping stone towards a career in Supercars.

The third generation racer was an established front runner in the TA2 Muscle Car Series before pinning his colours to the Australian Racing Group’s all-new National Trans Am series.

Seton heads up an expanded two-car Castrol Harris Racing operation, alongside team-owner Craig Harris, evidence to the 21-year-old of the growing popularity and progress of the category.

“It’s cool to have a team; we’ve got a transporter that’s all done up now, so it’s turning into a more professional outfit,” Seton told Speedcafe.com.

“I’m enjoying being part of it, part of the expansion and the whole thing.”

Between ARG’s Trans Am Australia series and the TA2 Muscle Car competition, demand for machinery is high.

There are currently more than 40 cars in the country, with a field of 20 cars fronted at the Superloop Adelaide 500 in February for the inaugural ARG event.

“It’s getting hard to actually get hold of one of the cars because of how popular it’s got these days,” Seton said.

“People are actually paying more for a second hand car than for a new car, it’s that hard to get a hold of them.

“It all depends on how it’s marketed,” he continues when asked where Trans Am will sit in the broader Australian motorsport landscape.

“I believe that they’ve got the potential to be as big as Supercars or TCR in Australia because they’re good looking cars, they sound good, they’re cost effective to run, they’re very low maintenance and they’re cheap to buy.

“It’s a good set up in that there’s not so much aero so it’s good racing and they’re challenging to drive.

“I think they’ve got good potential in the future.”

National Trans Am’s category manager, Liam Curkpatrick, echoes Seton’s belief that interest in the class is high, and was expecting a strong field at Sydney Motorsport before the event was cancelled.

“We’re pleased with how the Trans Am Series has begun and the support from the wider Trans Am competitor group,” Curkpatrick told Speedcafe.

“It was going to be a solid turn-around of competitors from our initial event at Adelaide.

“Everyone was happy with ARG’s first event and it was pleasing to see a similar list from Round 1 to Round 2.

“We are really looking forward to building on that list of entrants when we go back racing.”