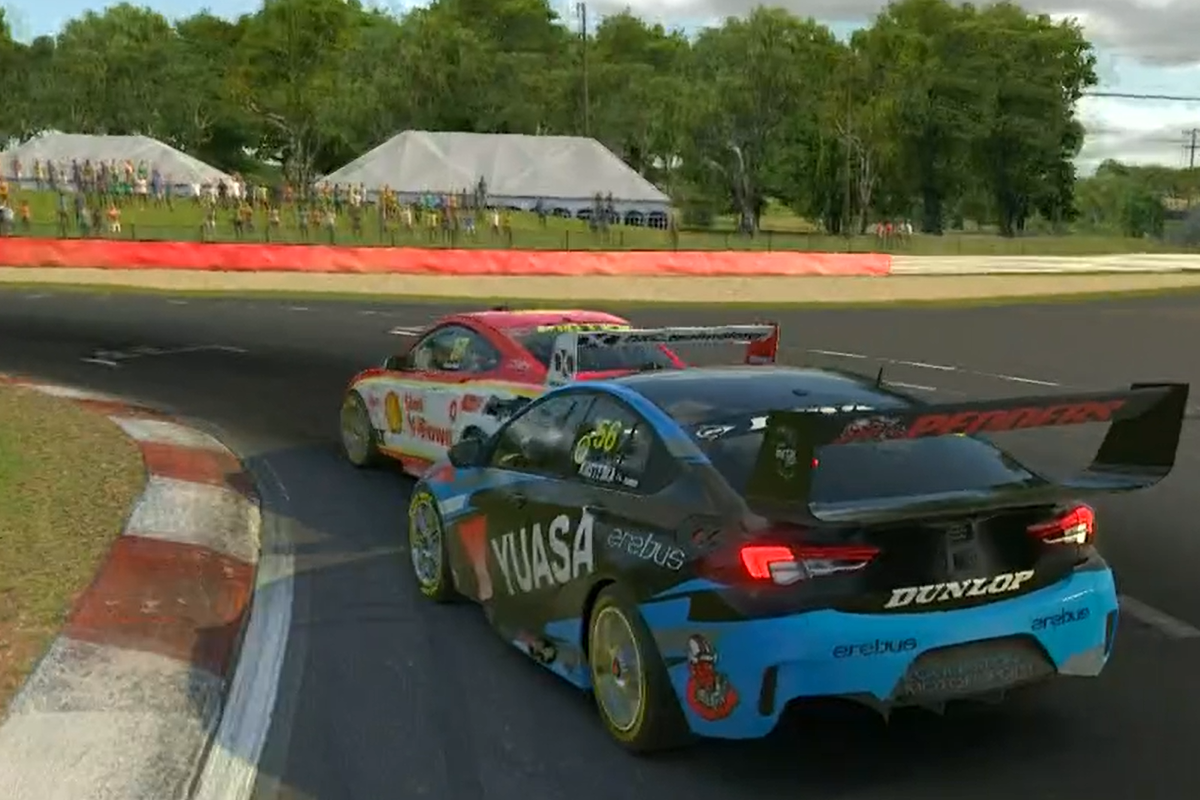 Kostecki and McLaughlin made contact at the final corner, which saw the latter go off the track

A post-race investigation has handed Scott McLaughlin victory over Brodie Kostecki in Race 10 of the BP Supercars All Stars Eseries.

It was a dramatic 14-lap affair that went right down the final corner of the final lap, which ended in McLaughlin being hit by Kostecki.

The Shell V-Power Racing Team driver went off the track and into the wall while Kostecki crossed the line to take the win.

However, a decision was made post-race to reverse the positions and subsequently gave McLaughlin the win.

Initially it was his team-mate Fabian Coulthard who led the race into Hell Corner from pole position.

David Reynolds was another early casualty. He spun on his own out of Turn 2 and dropped out of the top five.

Shane Van Gisbergen and Kurt Kostecki opted to pit at the end of Lap 1, as did Will Power and a handful of others.

At the end of Lap 1 it was Coulthard who led teammate McLaughlin, Cameron Waters, Will Davison, and Andre Heimgartner.

Drama struck on Lap 4 when Waters and Davison came to blows at Forrest’s Elbow. Davison got parked across the road and was subsequently collected by Power.

Matt Stone Racing team-mates Jake Kostecki and Garry Jacobson came to blows on Lap 5. On the run up to Griffins Bend, the pair had overlap and Kostecki drifted across the nose of Jacobson. The pair made contact and Kostecki ended up in the wall.

Mostert, De Pasquale, and Power tripped over each other on Lap 6 into Hell Corner. The trio all ended up with damage and out of the running.

As the race hit halfway the field reshuffled and it was McLaughlin who led van Gisbergen and Brodie Kostecki. Early race leader Coulthard fell back to fourth.

The pit stops continued late in the race, but the top three positions stabilised.

Once the second pit stop sequence shook out it was McLaughlin who led van Gisbergen and Kostecki. Waters was still fourth and Coulthard was fifth.

With just two laps to go, Kostecki got to the wing of McLaughlin on the run up to Griffins Bend. He hounded the Mustang, but a pass wasn’t forthcoming.

After two laps of dicing for the lead, the battle came down to the final corner. McLaughlin locked the rears and Kostecki ran into the back of the leader.

McLaughlin went wide and off the road, which allowed Kostecki to surge through and take the win.

McLaughlin copped a hit by van Gisbergen, but managed to finish second ahead of his fellow countryman.

A decision was swiftly made to hand McLaughlin the win, Kostecki second, and van Gisbergen third.

Waters was fourth and Heimgartner made a late race pass on Coulthard to crack the top five. Jacobson, Holdsworth, and Power completed the top 10.

Round 4 of the BP Supercars All Stars Eseries continues on April 29 at Circuit Gilles Villneuve and Watkins Glen International.