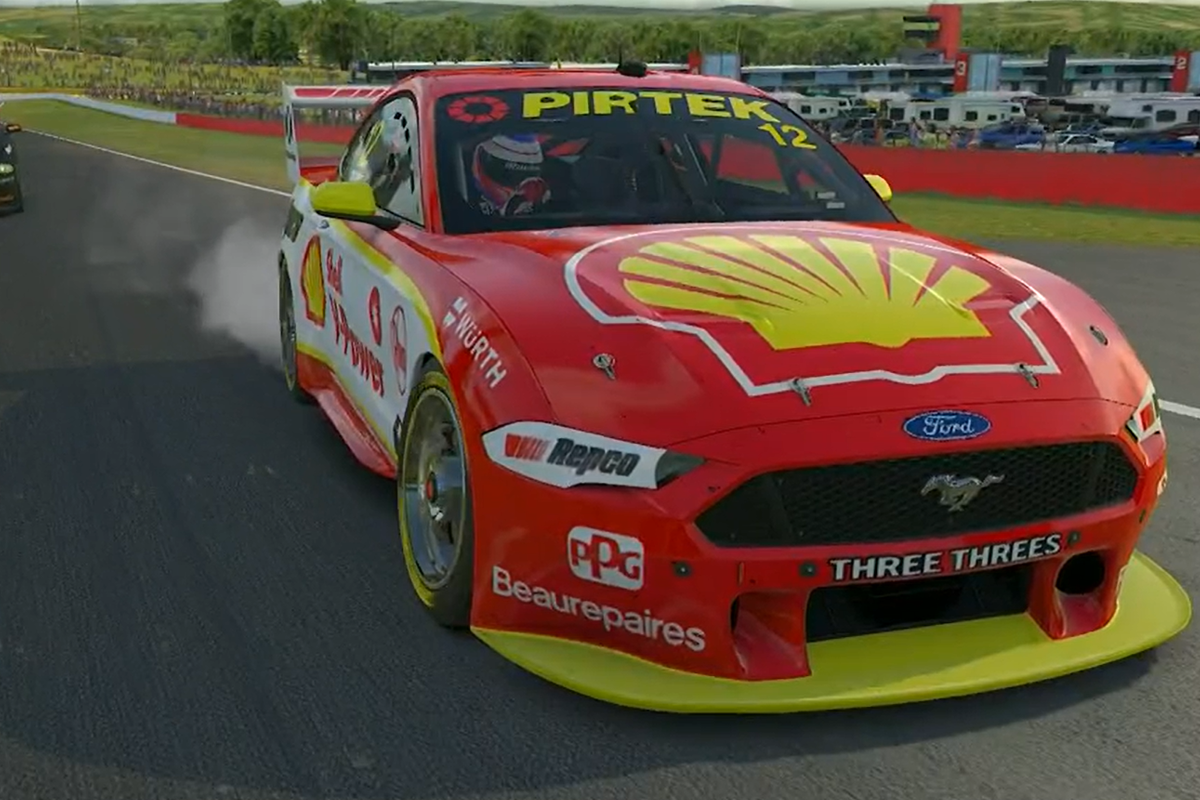 Fabian Coulthard has dominated Race 9 of the BP Supercars All Stars Eseries to lead an all-Ford top four lockout at Mount Panorama for the Shell V-Power Racing Team.

The results of Race 8 were reversed to set the grid for Race 9, which put Fabian Coulthard on pole position.

The Shell V-Power Racing Team driver managed to miss all the carnage at Hell Corner, completing his pit stop, and cruising home to take a 4.5-second win over Cameron Waters.

It was a chaotic start initially as Alex Davison went barrel rolling through the gravel trap at Turn 1. Scott Pye was another victim of the first lap drama, spinning off at the first turn.

Race 8 runner-up Brodie Kostecki tried to make headway early on. He sought to go around the outside of Shane van Gisbergen into Griffins Bend but got loose and slid into a parked Chris Pither.

Van Gisbergen got spun around on the approach to Brock’s Skyline by Thomas Randle. The Kiwi ended up in the wall and Randle was subsequently handed a penalty.

Jack Smith had a big crash at Forest’s Elbow and ended up on top of the concrete wall briefly. He continued but finished well down the order.

At the end of Lap 1, it was Coulthard who led Jake Kostecki, Andre Heimgartner, Will Davison, and Garry Jacobson.

Davison put pressure on Heimgartner up Mount Straight and nudged the Kiwi out of the way at The Cutting come Lap 2.

As the race hit halfway, several front-runners took to the pit lane, including Heimgartner and Davison.

A big crash on Lap 6 saw Garry Jacobson and Jamie Whincup overlap into The Chase and collide. Jack Le Brocq was an innocent victim in the melee. De Pasquale got caught up in the incident as well and was forced to pit again to repair his car.

Having run long, McLaughlin came to the pit lane on Lap 6 and returned to the race in fifth just ahead of David Reynolds who led a train of cars that ended with Brodie Kostecki in 10th.

Mostert was the last of the front-runners to pit on Lap 7. That put Coulthard back into the lead with Waters a distant second and Davison even further back in third.

Ultimately, Coulthard was unchallenged and took a dominant win. Waters was second and several seconds adrift. Davison completed the podium, holding of McLaughlin late in the piece.

Reynolds was an impressive fifth for Penrite Racing while Zane Goddard was sixth and van Gisbergen seventh.

Mostert, Heimgartner and Brodie Kostecki completed the top 10. Kostecki was in line for a seventh place finish until he locked up his rear wheels and lost out at Murrays.

Power narrowly missed out on a top 10 finish. He was 11th ahead of Holdsworth, Fullwood, Jacobson and Jones. Anton De Pasquale eventually finished 25th and one lap down.

The grid for Race 10 will be set from the finishing order of Race 9.