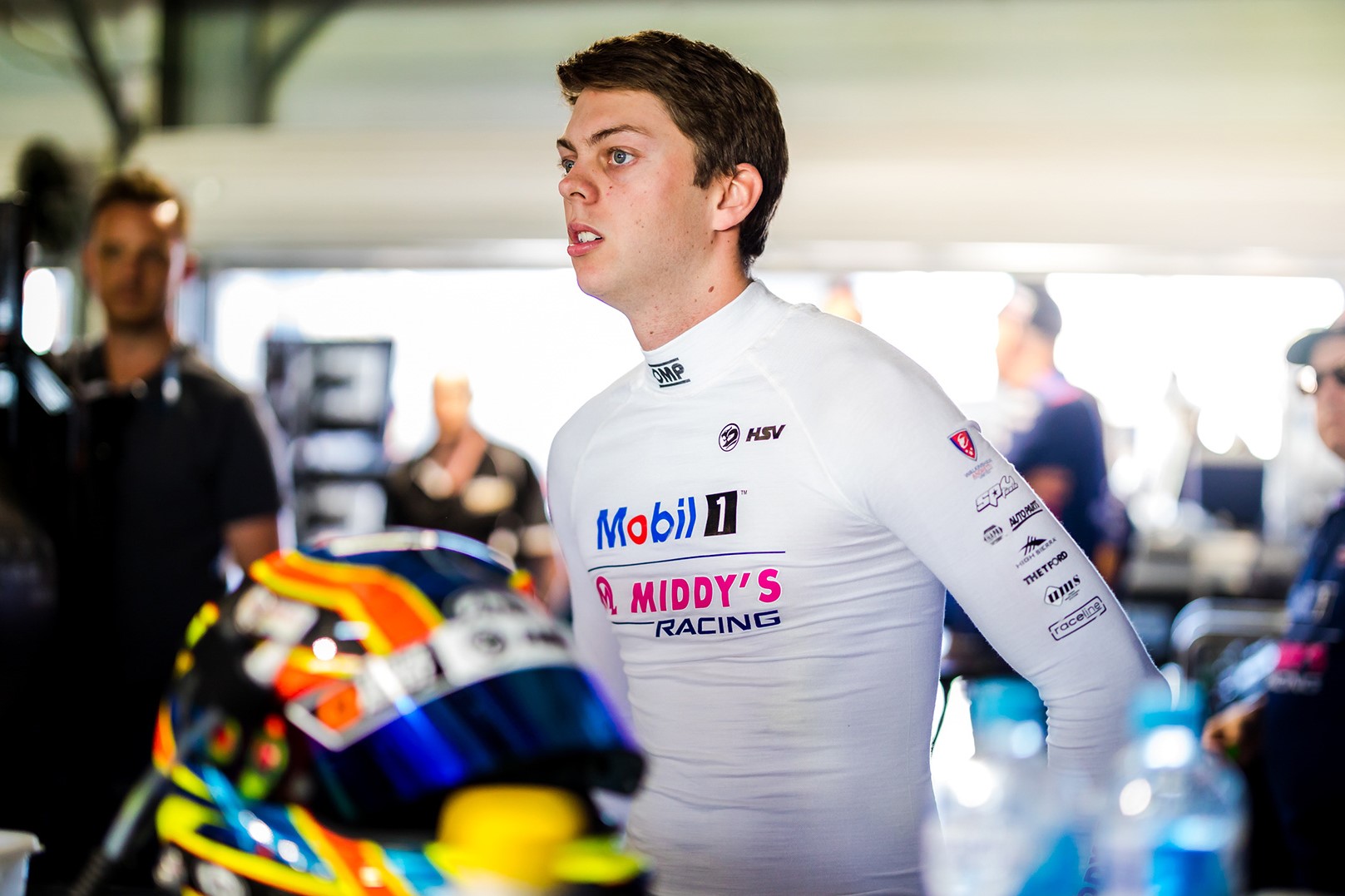 A latecomer to motorsport and often a victim of circumstance, Bryce Fullwood’s trajectory towards Supercars success has been anything but conventional.

Born and raised on a farm in Darwin, Fullwood learned to drive a manual car at just six years old.

His father was a competitive motocross rider, but motor racing wasn’t something Fullwood had been brought up around.

Not long after turning 10 years old, Fullwood was introduced to the sport. A trip to the local hire kart circuit led to Fullwood getting his first taste of karting.

They soon bought a junior level kart and what started as a father-and-son hobby with no career ambitions quickly snowballed.

Fullwood began winning in Darwin and state-level titles were coming his way. The next step had to be outside of Darwin, but Fullwood had to earn the opportunity.

“I was never too crash-hot at school,” Fullwood said.

“I didn’t really want to be there and Mum said that if I got my school grades up, which was a big effort for me, that we would go south and do a race there.”

Fullwood’s first race away from home was in Ipswich where he was “absolutely annihilated” by the opposition.

Despite the loss, he’d learned a lot from his weekend away and was quicker once he returned home. The wins kept coming and the decision was made to pursue more races further south.

Eventually, the national title decider came to Darwin in 2012. Fullwood finished second in the Junior National Light division at 13 years old and a year later won the title in 2013. He continued karting until he was 16 years old, racing all over Australia with the occasional international race in North America and Europe. Car racing was soon on his radar.

It’s commonplace for drivers to progress from karts into single-seaters, but Fullwood had little desire to follow the beaten track.

He believed Formula Ford was on the comedown and the then-new Formula 4 category was only just starting to get off the ground.

He’d beaten the same competition in junior karting and didn’t feel the need to do it again so he sought to make the step into a Supercar for 2015, still just 16 years old.

After cutting over 100 laps, Fullwood decided he’d be up to the challenge of moving into the Supercars feeder Dunlop Super2 Series.

Fullwood threw himself into the deep end, making his car racing debut at the Adelaide 500 for Paul Morris Motorsport.

“When I very first started my first goal was to just not come last,” said Fullwood.

“That was my goal at Adelaide. I think I came 18th. That’s when there were 26-car fields, so I was pretty stoked with that.”

He had mixed results thereafter for Paul Morris. In the meantime, his father had put a deal together to race at Matt White’s MW Motorsport for the following year.

Fullwood debuted for the team at the final round of 2015 and scored back-to-back top 10 finishes, ushering a boost of confidence for the young gun.

He finished his first season 17th in a field of 20-plus drivers but was buoyed by the prospect of being better placed for 2016.

However, those hopes were dashed as Car of the Future entries becoming eligible. Ultimately, he struggled to get the results in an older Project Blueprint-spec Ford Falcon FG.

He finished the year in 14th, a podium at the season-ending Sydney 500 a glimpse of what was possible when everything came together.

For 2017, his third year of competition, Fullwood once again raced for MW Motorsport. The team purchased three Nissan Altimas, but Fullwood had to start the year in the older Ford. 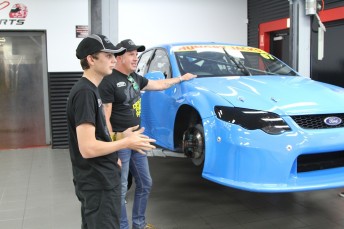 Paul Morris and Bryce Fullwood circa 2014

It was another tough start, but while the results weren’t great he was still impressing his team behind the scenes.

“I remember going to Phillip Island and beating my head against a brick wall because the old car just didn’t have the aero,” he said.

“I was absolutely wringing the thing’s neck. I was going nowhere.

“Then my engineer said to me, ‘this car has actually never been around here that fast’ it was just that everything else had got a lot faster.”

A Nissan arrived midway through the year and a podium was forthcoming immediately, claiming third place at Townsville.

When given the right equipment, Fullwood was convinced he could win.

While Fullwood struggled, Todd Hazelwood went on to win the Super2 title with Matt Stone Racing and made the step up to Supercars a year later.

It was a decision he soon regretted. The team dropped the Ford after three rounds and returned to Holden. Fullwood ended the year in 17th, equal worst with his debut season and without a win or a podium to his credit. 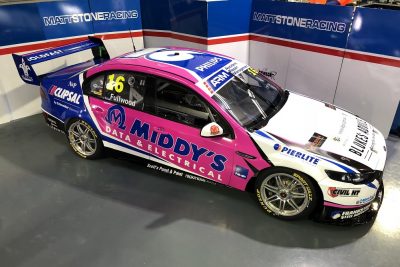 “That was obviously widely publicised that it wasn’t the best move for me, but at the time we were thinking they were a championship-winning team with DJR Team Penske cars,” he said.

“There was a lot of good stuff coming. We gave it a go and I think for many reasons it didn’t quite work out for us.

“I knew I was capable, but just being in the right place at the right time was seemingly near impossible for me.

Fullwood returned to MW Motorsport and dominated the title race in a year that saw him score six wins and finish off the podium on just three occasions.

At face value, it would be easy to write Fullwood’s achievements off having had five attempts at the title.

However, it’s a statistic that Fullwood said has to be put in context.

“It’s funny, a lot of people do look at the scorecard and go ‘shit, you’ve had a few goes at it’,” said Fullwood. 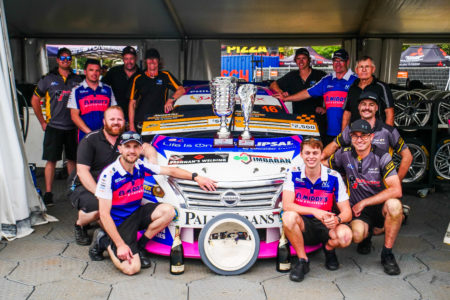 “There were years in limbo where I couldn’t do much. In year two I was in an old car against the Car of the Future cars, which was really hard to gauge our performance against.

“In the third year I did really well in the Nissan at the end of the year when I started getting my head around it, but I got it too late in the year.

“Obviously year four was the year that didn’t go anywhere.

“I’ve done five years of car racing straight out of karting. There were quite a few years where we had our hands tied behind our back.

“I’m very thankful that I was able to pull everything together in the end.”

As he sought to break into the Supercars grid for 2020, Fullwood called every team in the pit lane to sound them out for a drive in 2020.

Ultimately, he moved into Walkinshaw Andretti United, a team who he said initially didn’t take much interest in him.

“Walkinshaw actually weren’t really that interested to start with,” he recalled.

“I had Techo’s (Mat Nilsson’s) phone number and thought I’d get on to him. I spoke to him and they didn’t know where they were at. They weren’t that interested.

“Later on I was in Melbourne so I called him again and said ‘I’m in Melbourne, why don’t I come for a meeting and say hey and introduce myself to you?’

“That’s when the ball started rolling. I think they saw my enthusiasm and drive to succeed.” Having convinced Ryan Walkinshaw as well as co-team principals Nilsson and Bruce Stewart that he should be part of the team, Fullwood had to make the big call to Andretti Autosport owner Michael Andretti and McLaren boss Zak Brown.

“Ryan Walkinshaw said to me ‘these guys are part owners in the race team, so they’ve got a say in who drives the race cars. You need to sell yourself.’

“I spoke to Michael Andretti and Zak Brown, and I tell you what, when you’re a kid from Darwin and ringing those two dudes … far out, I was shitting myself.

“These guys have spoken and dealt with the best drivers in world motorsport and here they are talking to a kid from Darwin about Supercars in Australia.

“There was a long time there where I wasn’t sure what was going to happen, but I’m very thankful they chose me and gave me the opportunity.” For Fullwood, the start of the 2020 season was much like his first season of Super2; in at the deep end starting from scratch.

However, it’s a challenge that he’s ready to face.

“I feel like I’ve jumped off the top of one mountain and onto the bottom of Mount Everest,” he said.

“You earn all the respect of the people in your category and you work your way up. Then you get out of that and start from square one again.

“I know what everyone will be like. They’ll be pushing me around. Until I earn their respect it’s going to be hard going for a while, but I’m ready for it.”