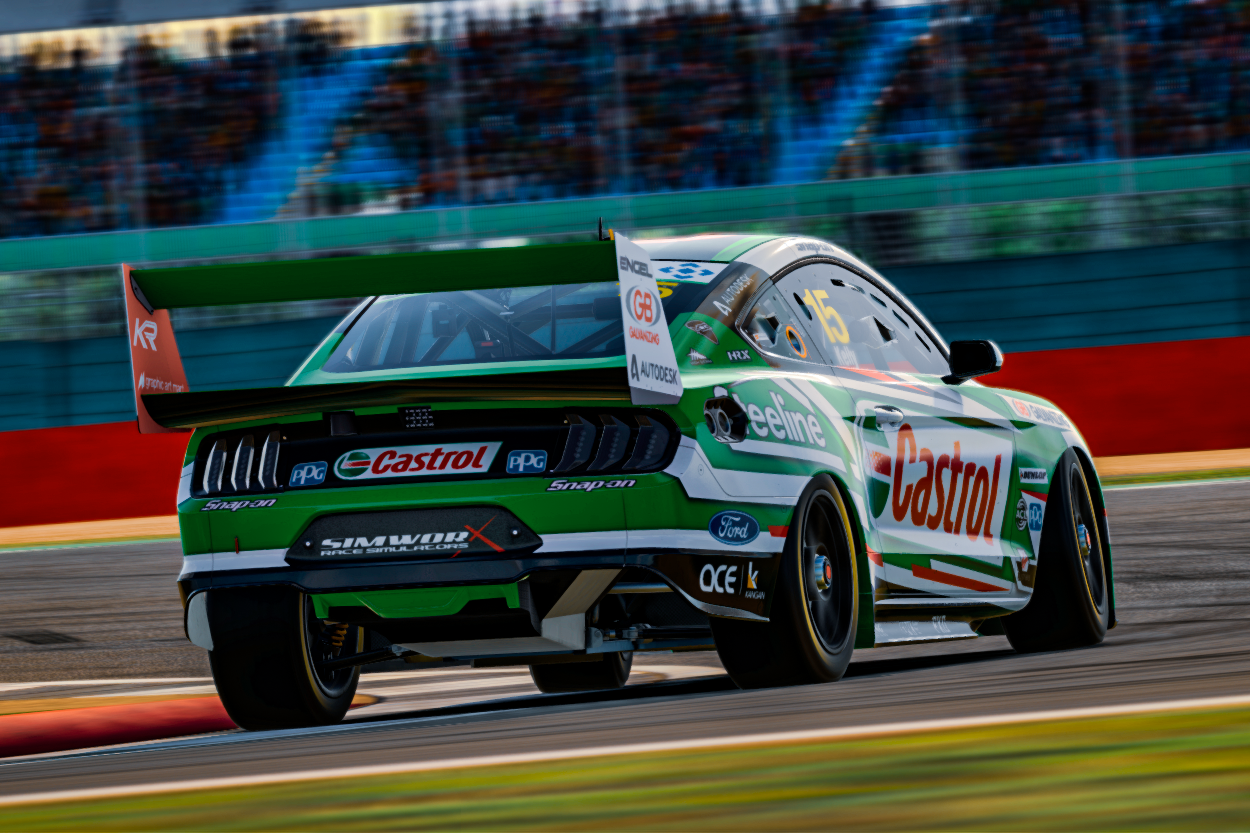 Rick Kelly managed to keep all four wheels grounded during an evening where the 2006 Supercars champion said he improved ‘quite a bit’ in the BP Supercars All Stars Eseries.

A veteran of the Virgin Australia Supercars Championship, Kelly has quickly had to learn how to race in the virtual world.

The first round of the iRacing-based Eseries was punctuated by a bizarre incident that saw his Ford Mustang skyrocket into the air at Phillip Island.

Kelly’s barn-built simulator recently got an upgrade with three new monitors, something that the Supercars champion said has helped his immersion and feel in-game.

“I think we improved quite a bit from where we were last week with the Eseries even if the overall results don’t really reflect it,” said Kelly.

“I think everyone is generally improving particularly the guys at the back of the field that are new to the iRacing.

“The LG TVs were obviously a big improvement from last week and gave me a much better feel of what the car was doing in the game and we managed to have pretty clean races, there was no Kelly Copter this week.”

Kelly recorded finishes of 17th, 19th, 15th, and 18th across the four races at Silverstone and Circuit de Barcelona-Catalunya.

It wasn’t a drama-free night though as he still struggled to adapt to the driving traits of the virtual Supercar as well as learn two new circuits.

“I think I took myself out a couple of times, just losing the rear of the car on a couple of occasions on cold tyres,” he said.

“There’s a lot to learn with the iRacing particularly the way they simulate the tyre temp and degradation which you have to take into account.

“But obviously you don’t have the seat of the pants feel for it that you would normally in the real world so that’s something I need to learn.”

A two-time Supercheap Auto Bathurst 1000 winner, Kelly has high hopes for Round 3 as the Mount Panorama Motor Racing Circuit.

“That’s obviously a track that I’ve done a lot of laps at, I know all of the lines and where the track goes so I won’t have to learn two new tracks as I did this week.

“I can focus on just putting in laps and getting a good feel for the car’s handling and the way the tyre life affects the lap.”

Kelly has also teased more upgrades to his simulator, which currently comprises of a steering wheel attached to a wooden frame and camping chair.

“I’ve got a few tricks that I can use to try and improve the simulator for next time as well to give me more feel,” he said.

Round 3 of the BP Supercars All Stars Eseries continues on April 22 at 18:00 AEST.