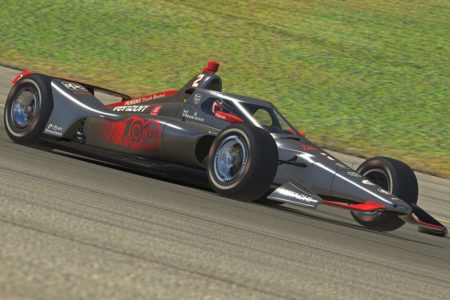 Scott McLaughlin has come back from a pre-race crash to finish second in a one-two finish for Team Penske at Michigan International Speedway.

Racing in the third instalment of the IndyCar iRacing Challenge, McLaughlin qualified fourth behind pole-sitter Marcus Ericsson, Will Power, and Felipe Nasr.

There was carnage as the race got underway when several drivers tried to get an early jump.

Oliver Askew of Arrow McLaren SP slammed into the back of Chip Ganassi Racing driver Felix Rosenqvist and set off a chain reaction that caught McLaughlin out too.

The Safety Car was immediately deployed and several drivers headed for the pit lane for repairs, including McLaughlin.

The race eventually restarted on Lap 5 with Ericsson ahead of Power, Nasr, event one winner Sage Karam, and Kyle Kaiser.

Having made that pit stop to repair his car, McLaughlin fell to 25th in the order.

Despite the carnage at the start, the race managed to run caution-free until the end.

The majority of the field sought to execute a one-stop strategy, with pit stops taking place around the halfway mark on Lap 40.

As the strategy played out, McLaughlin ended up in contention for a podium but well adrift of the leading pack.

With 10 laps to go, it was Alex Palou who led Ryan Hunter-Reay, Zach Veach, Simon Pagenaud and Kyle Kaiser in the battle pack at the front.

It soon became apparent most would have to stop again having not saved enough fuel for the finish.

Some 15 seconds adrift of the top group was Dalton Kellett, Dale Earndhart Jr., McLaughlin, Jack Harvey, and Sebastien Bourdais to complete the top 10.

Palou clipped the wall with a handful of laps to go and came to the pit lane for his final pit stop, which put Hunter-Reay to the front.

The final stanza of the race saw a six-way battle for the lead. Hunter-Reay had to pit with five laps to go and that put Veach to the lead.

Kaiser began to save fuel and dropped off the back of the leading pack, which left Veach to battle with Pagenaud.

With just two laps to go Veach came to the pit lane and relinquished Pagenaud at the head of the field who was safe on fuel.

Kaiser duly inherited second place, but he ran out of fuel with a lap to go.

Further afield, McLaughlin managed to put a pass on Earndhardt Jr. and as he blew past a slowing Kaiser snagged second place.

Ultimately, it was Pagenaud who claimed a storming win from 22nd on the grid, 13 seconds clear of McLaughlin and Earnhardt Jr.

“I got unlucky at the start but we got the right pit play at the end there with my spotter TJ (Majors) and my engineer Jonathon (Diuguid),” said McLaughlin.

“They were punching numbers and it really worked out good there. Just saving fuel and I managed to pass (Earnhardt )Jr. with a few laps to go.

“I never thought I’d say that, but it was very cool. It was a lot of fun racing him and I’m really proud to put the SnapOn car on the podium.

“I did a few practice races during the week. That was really good for me to learn.

Round 4 of the IndyCar iRacing Challenge takes place on April 19 at a random draw circuit still to be announced.

McLaughlin will continue his iRacing exploits on April 15 as part of the BP Supercars All Stars Eseries at Silverstone Circuit and Circuit de Barcelona-Catalunya.