WHERE ARE THEY NOW: Ken Smith

WHERE ARE THEY NOW: Ken Smith 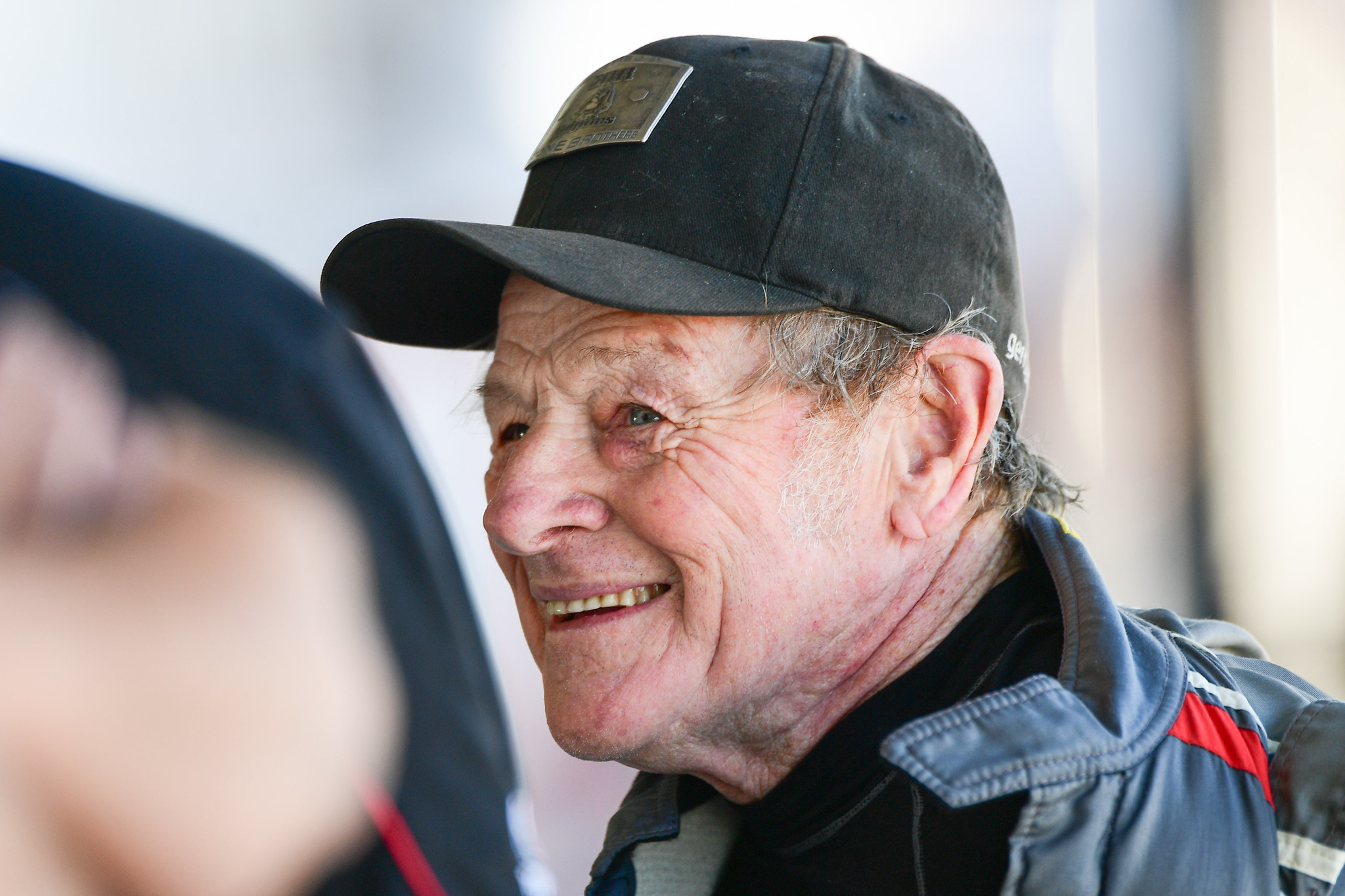 As far as New Zealand sporting royalty goes, they don’t come much bigger than the diminutive Kenny Smith.

Just a few months ago, Smith successfully competed in his 49th New Zealand Grand Prix when he was classified in 16th place at the Manfeild Circuit Chris Amon in the south of the country’s North Island.

Father time has served Smith the best of hands. He is 78 years old, is in his unbroken 62nd year of competitive motor racing and is racing open-wheel bucks who are young enough to be his great-grandchildren.

Whether or not Smith competes in what would be an incredible landmark 50th NZ Grand Prix next year is not up to his advancing years but more so if the world is finally rid of the insidious virus that has put the brakes on global day-to-day activity.

“I will be there if they have it. If this virus doesn’t take over and prevent the international guys from coming out here for our Toyota Racing Series,” Smith declared.

“Who knows that far down the track what will happen. It might have to be put on hold for another year in the worst-case scenario but all that means is that I will be back in 2022.”

Smith, who lives at Bombay near the Pukekohe circuit to the south of Auckland, is keeping himself busy in this strangely eerie time as much of the world’s population is coaxed into self-isolation.

“Well it’s a bit of a bugger especially if you have plenty to do which I do,” Smith said.

“I bought an ex-Marcus Armstrong FT-50 TRS car which I have run in an open single-seater class which has just started here in New Zealand.

“It’s a totally different driving style compared to the Formula 5000. You have to be quieter and smoother to be quicker whereas in the 5000 you have to hustle it around a little bit. But if I try that in the TRS car you go slower.” 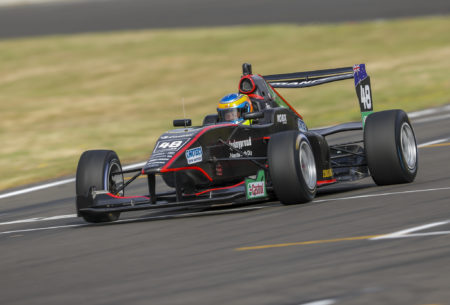 Over the last 12 years Smith was regularly winning in New Zealand’s acclaimed Formula 5000 Tasman Cup Revival series, however that has now come to an end.

He has reluctantly departed with his beloved T332, a Lola which has a rich pedigree and was once campaigned by ex-American IndyCar pilot Danny Ongais.

“I sold it and it has gone to a museum (Ross Bros) at Cambridge. At a weak moment the people who run that museum now own it.”

Smith harbors some regrets about letting the machine go which ran in the same livery as when he won the first of his three NZ Grand Prix races in 1976.

“I do miss driving it. After campaigning it for so long I really got attached to it so maybe I shouldn’t have sold it.

“But anyway I won’t lie down. I’ll keep going again. This is my 62nd year of racing and we’ll keep cranking on.

So how does someone approaching 80 keep themselves race sharp and agile against the budding F1 stars in their teens and early 20s?

“During any year there are normally a handful of Formula Libre style races where we are running an Atlantic car. I’ve got two of those which I run so that helps.

“Also Formula Ford keeps you up to speed and I’m always jumping in and out of cars.

“So it’s not like I go to the end of the year and then wait another year and jump in again. I’m always competing and that’s where I get my physical fitness.” 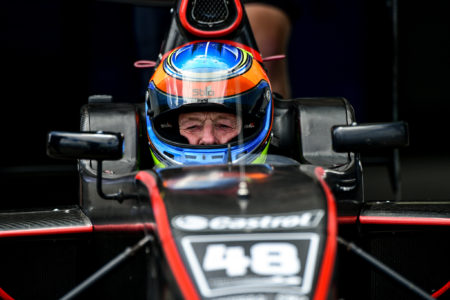 Smith was again fielded by the Stephen Giles (ex-McLaren F1 mechanic) TRS squad for his 49th NZ Grand Prix appearance with the septuagenarian having to come to grips quickly with the championship’s new chassis.

The TRS replaced the FT-50 Tatuus tub which ran from 2015-2019 with the FT-60 which houses a bigger, more powerful turbocharged 2-litre engine.

“It was a bit of a battle. That new car is so incredibly hard to steer. I needed three sets of arms to steer the bloody thing. Whereas the previous chassis was quite simple.

“But I just then blanked out how difficult they were to drive and I got within 1.2s of the fastest lap and I was quite happy with that.

“Some of these guys have done 25 days racing in those cars from a Thursday to Sunday and I just jumped in at the grand prix meeting for the first time.

Smith is a self-confessed motor racing addict as evidenced by the annual Hampton Downs NZ Festival of Motor Racing three years ago when the veteran was lumbered with an astonishingly hectic schedule and an even more remarkable story of how he won a Formula Ford race.

“I jumped in and out of six different cars, three saloon cars and three single-seaters, that day,” Smith enthuses.

“One of the last cars I drove that weekend was a Formula Ford and someone said, ‘aren’t you supposed to be in this race’? ‘Oh shit yes’ I said. I leaped into the pit lane to get in my car but I couldn’t go out until the field had gone by.

“I thought bugger it; I’ll go out and then come back in to at least say I’ve started albeit late. But on my first lap I knocked a couple off and by the time the last lap came I took the leader around the outside going into turn 1 and I went on to win the race.” 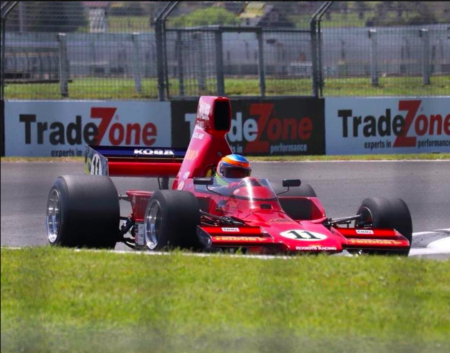 It is no secret that Smith has been a great source of guidance for some of New Zealand’s hottest drivers in recent decades that include the likes of Scott Dixon, Brendan Hartley and Shane van Gisbergen.

Updating Smith’s latest racing exploits triggered a memory from the Indy 500 in 2004 when the jockey-sized driver was loitering around Gasoline Alley among the masses.

Smith had arrived in Indianapolis to offer crucial guidance to his New Zealand compatriot, Dixon who at the time was tackling only his second start at America’s blue riband open-wheel race for the then Toyota-powered Chip Ganassi team.

Smith was often seen in the Formula Holden paddock in Australia back in the 1990’s which was where Dixon revealed himself as a prodigious talent by winning the 1998 Australian Driver’s Championship before embarking on his US career path.

The wily and wizened Smith continued to mentor Dixon as his career moved from Indy Lights into CART briefly before cementing a spot in the main IndyCar game.

While happy to see some Antipodean journos among the crowd that day at the Indy 500 Smith, in typical humble style, played down the importance of his coaching of Dixon.

“I’ve just been helping him out with simple things like making sure he is relaxed and his head is in the right space,” he said back then.

“He’s in good shape and I reckon he will do well.”

Dixon managed to finish eighth in 2004 after starting 13th in a bizarre race that featured red flags and where the Brickyard was eventually sent into lockdown soon after the race finished when a tornado struck.

With a career crammed with memories, Smith says that he first wondered about the longevity of his chosen sport after 40 years at the wheel.

“I remember when I did 40 years non-stop and I thought, ‘geez I might have a crack at extending to 45’.

“I love doing it. It is the greatest sport in the world as far as I’m concerned.

“One of the good parts is the people you deal with. Being involved with Brendan Hartley and getting his deal overseas and Scott Dixon in IndyCar and Shane van Gisbergen in Supercars and then Tom Alexander who won the Super Utes series for Ross Stone in Australia.

“There’s dozens of drivers I’ve helped over the years and I get a lot of enjoyment out of doing it.”

Few could argue against Smith being the most qualified of all racers to be offering advice to young, talented Kiwi and Australian racers embarking on their single-seater careers.