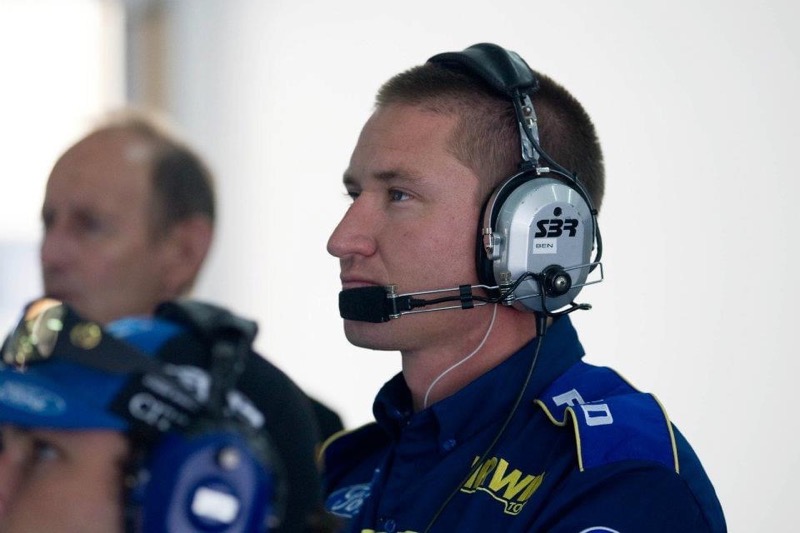 Ben Croke has enjoyed ultimate success at Stone Brothers Racing and DJR Team Penske, but he could have easily ended up at Triple Eight Race Engineering if not for a change of heart.

Born in a small town called Taralga, iconic circuits like Oran Park, Amaroo Park, and Mount Panorama were only a couple hours drive for Croke growing up.

Attending races at a young age with his grandfather, his interest in motor racing grew and soon enough he was gearing his life choices towards working in it.

At highschool Croke took a simple automotive course in Year 10 and by Year 11 was working as an apprentice mechanic at the local Holden dealer in Goulburn.

During his apprenticeship he was taught by Mike Hanley at TAFE Campbelltown, an accredited New South Wales scrutineer who quickly had Croke working in the sport.

“Myself and another guy, Ian Spinks, we’d shown a bit of interest in wanting to do some motorsport stuff,” Croke recalled.

“He pointed us in the direction of a few teams that needed some part-timers. So we would go and help with GRM at the local rounds.

“At Bathurst in 1997, GRM actually needed another hand, they were short a fire extinguisher guy. So I went over and did the Bathurst 1000, which was my first race.

“Until last year it was my best result too, we finished second with Steven and Jim Richards.” 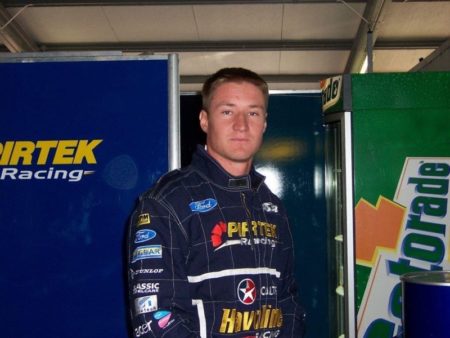 Croke in his early days at Stone Brothers Racing

Hanley proved to be influential in Croke’s career, getting him involved with a UK team called Brookes Motorsport that contested the AMP Bathurst 1000 in 1998.

From that opportunity Croke was offered a job and at 21 years old he moved to the UK to work as a number two mechanic in the British Touring Car Championship.

Ultimately, his time abroad was short lived. Costs were increasing in the championship and manufacturers were pulling out as a result.

Brookes Motorsport was one of those to leave at the end of the 1999 season. Croke quickly had to make a call whether he looked to stay in the UK or move home.

That’s when an opportunity at Triple Eight Racing arose, which at that time was the factory Vauxhall team run by Roland Dane, Derek Warwick, and Ian Harrison.

At the same time, opportunities were afoot in Supercars.

“I had a difficult decision to make; whether I stay and try and get a job with another team, or come home to Supercars,” he said.

“I actually had an interview at Triple Eight, well before the days of them even coming out here to Australia. I almost took the job.

“But in the end the lure of Supercars and the way that it was going was enough. I thought I’d better come home.”

From the UK, Croke called Larry Perkins and by mid-September had a job building his first V8 Supercar for the 1999 FAI 1000.

He spent two years with Perkins Engineering before experienced engineer Paul Forgie convinced Croke to come across to Stone Brothers Racing and work with a young Marcos Ambrose.

“Marcus was on the rise at Stone Brothers Racing,” Croke recalled.

“Paul rang up and said, ‘Look, we’ve got this Ambrose guy here, he’s going to be good. Do you want to come up and be a mechanic on that car?’”

It was a move that paid dividends. In only his second season of Supercars, Ambrose finished third overall in the 2002 title race.

Championship success followed a year later in ‘03 and he backed that up with his second title in ‘04. 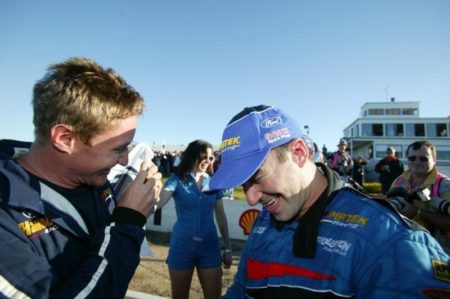 “Marcos at the time was highly driven, just a real determined individual,” Croke recalled of Ambrose.

“He’d just come back from Europe and he was just so determined and so driven. He just knew what he needed to go fast, and he was a really good team guy to be around as well.

“He really looked after the guys in and around his car.”

Croke’s career in Supercars had started strong. In only a few years he had two championship wins with Stone Brothers Racing.

However, a third straight title wasn’t forthcoming in a year that was blighted by the balaclava scandal at the Bathurst 1000 among other issues.

Ambrose had also announced plans to move to the USA to begin a career racing in NASCAR, something Croke said played a part.

In the end, the sister Stone Brothers Racing car of Russell Ingall claimed the 2005 championship.

“In ‘05 we should have won the championship again,” he said.

“Marcos was distracted because he was going to America at the end of that year. We should have won Bathurst that year too, but the whole balaclava thing sort of popped up.

“Russell ended up winning. That was still a great achievement for the team.”

Croke still looks back on his formative years with Stone Brothers Racing fondly.

“You’re working on touring cars and you’re winning races, working hard, and just having a lot of fun. It’s kind of hard to put in words, but just satisfying I guess.

“At school you’d sort of set your mind to this task and you knew where you wanted to be, and the fact that you’d win a race or two was going to be the best thing in the world.

“But then for it to step up to the next level and win championships and compete for the Bathurst 1000, Teams’ Championships and that, it was extremely satisfying as a young fellow.” 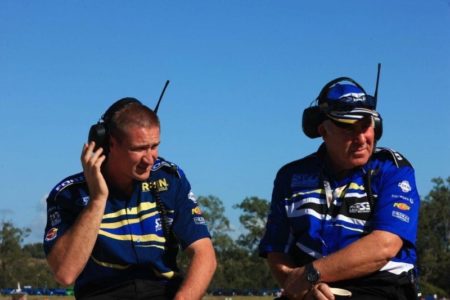 The balance at Stone Brothers Racing soon shifted. Ambrose was off to race in NASCAR and in came a young James Courtney alongside the stalwart Russell Ingall.

A championship wouldn’t come again after ‘05 as the momentum shifted in favour of Walkinshaw with two titles on the trott for Rick Kelly (2006) and Garth Tander (2007).

Croke stuck around at Stone Brother Racing through the mid-to-late 2000s and worked his way up the ranks to be a chief mechanic.

While championships weren’t forthcoming, Croke and the team still found the occasional win with Shane van Gisbergen who was starting to make a name for himself.

Croke later transitioned into a team manager role when Stone Brothers Racing was bought by Betty Klimenko and became Erebus Motorsport in 2013.

The team was one of three to bring in new manufacturers under Car of the Future; Kelly Racing with Nissan, GRM with Volvo, and Erebus with Mercedes.

At the time, Croke said it was an interesting prospect for the team, but that interest waned once he and the team realised the tremendous difficulty of the project.

“We just had tremendous engine problems early on. The whole single butterfly thing and the drive by wire. Things weren’t great. We just struggled.

“We built those cars in a really quick timeframe as well. There were pallets and containers of parts turning up every day from Germany.

“It was just challenge after challenge. Front bumpers were breaking in half. It was definitely one of the hardest 12 months that I’d done.” 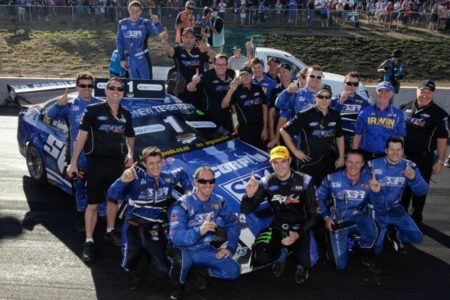 As Croke grew frustrated, it soon became apparent that opportunities might be forthcoming elsewhere.

With chatter that Erebus Motorsport might be moving to Melbourne in 2016, Croke looked across the road.

By that point, Roger Penske already had a majority stake in Dick Johnson Racing to form DJR Team Penske.

It was a watershed moment for Croke who some 15 years earlier had watched the way the IndyCar team worked at the Gold Coast.

He knew he wanted to make the move.

“Even as a young fellow going to the Gold Coast race, I’d go and watch the Team Penske guys do their pit stop practice and just watch how they operated,” he said.

“Once that sort of became evident that Team Penske were coming to Australia and teaming up with Dick Johnson Racing, it was definitely something I kept my eye on.

“One of the commercial guys who had been at Stone Brothers Racing for a long time started there in 2015. He said that it had potential and looked like a really good thing.

“Some talks started, I met some people, then met some more people, and then eventually talked to some other guys.

“It was something that I wanted to pursue, we made something happen, and here we are now.”

By late 2015 a job as team manager at DJR Team Penske was his.

The team expanded to a two-car operation with Fabian Coulthard and Scott Pye at the helm of two Ford Falcons. However, Croke’s first year with the team in 2016 was a tough slog. 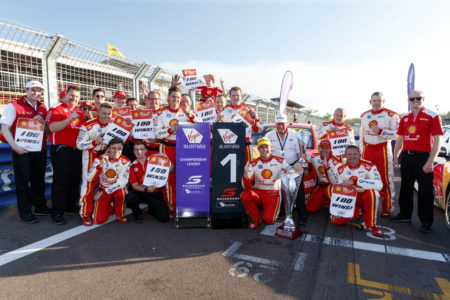 Croke made it his mission to redevelop the team’s processes at home in the workshop and away at the track in their pit stops.

While results weren’t spectacular, progress was being made behind the scenes.

“I guess there were the outside expectations, but we knew the time frames and the goals and what we wanted to do,” Croke said.

“We knew that we needed to put some procedures in place. We needed to do work on pit stops.

“When I sat down with Roger and I told him, ‘I’m your guy,’ I said, ‘The pit stops are something that I feel really strongly about, and I want to work on having good pit stops.’

“We knew it was going to take some time. I think we made a lot of inroads in 2016, but it wasn’t visible from the outside because we didn’t go and win races.

“There were definitely a lot of gains and a lot of progress made in 2016.”

All while that was happening plans were being hatched for 2017. Scott McLaughlin joined the fold from GRM while Ludo Lacroix was courted from Triple Eight.

The team soon found that success synonymous with the Penske name, nearly winning the Drivers’ Championship with McLaughlin in his first year at the team.

As has been well documented, McLaughlin claimed back-to-back championships in 2018 and 2019 as well as a Bathurst 1000 win last year. All of which are Croke’s greatest successes. 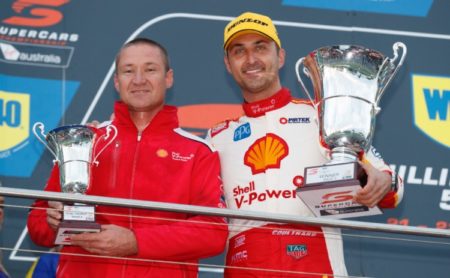 Reflecting on his time to date at DJR Team Penske, Croke said he’s seen a significant shift in the dynamic of the team.

“The environment’s changed too, you call it the Penske way,” he said.

“I think Tim (Cindric) has said it in an interview, he wants it hard to get into, but harder to get out of, because people buy in and that’s the thing.

“We’ve got a really great mix of young fellows, and experienced guys, and stuff like that. And what we’ve built over the last three or four years is a fantastic bunch of like-minded people.

“Everyone goes about their business in the same way, and they all put the team first.

“The workshop, you walk in there to start your day’s work and it looks like nobody’s been there from the day before, it looks like it’s been empty for two weeks.

“The first guy that I met with, Geoff Swartwout (former team manager), said to me, ‘Presentation comes before performance for Penske.’ 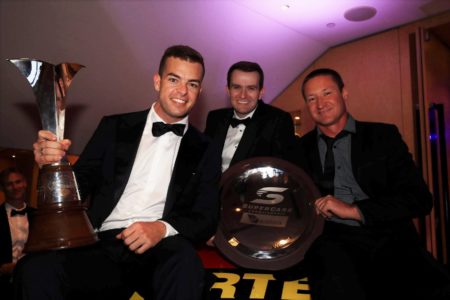 “And you know how high they rate performance, so that tells you how highly they rate presentation.”

Ultimately, Croke hopes he can see out his career at the team and have even more success.

“I think I’ve always said that I’m probably not about to move for motorsport anymore,” he said.

“If racing teams weren’t to exist on the Gold Coast, I’d go and sell hot dogs at SeaWorld. That’s what I sort of joke to the kids about at home these days.

“I really love working with Roger and Tim, Dick Johnson, Ryan Story, and all the guys there. It feels like home. It feels like what I’d like to keep doing for a long time.”