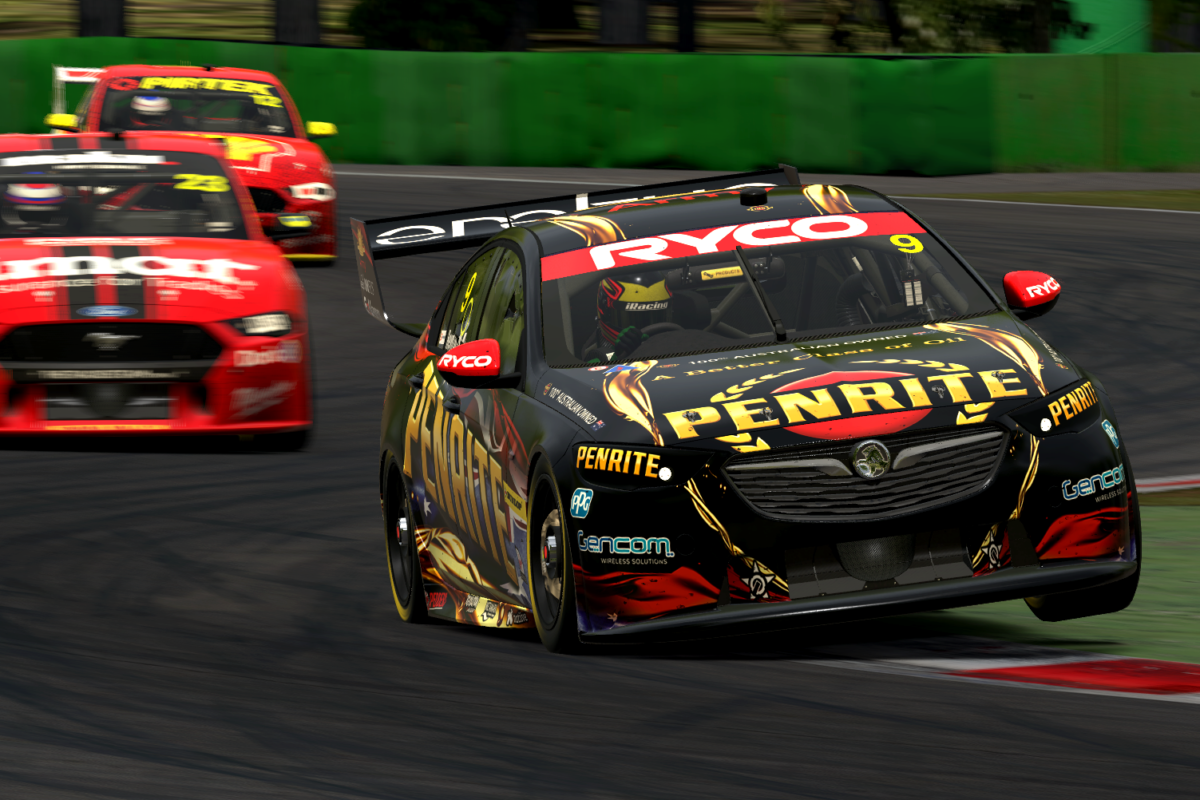 There’s been mixed reaction to the seriousness of racing in the BP Supercars All Stars Eseries following a chaotic, crash-filled first round this week.

Amid the ongoing coronavirus pandemic, the iRacing-based competition has put Supercars back in the spotlight to give fans their motor racing fix, albeit, virtually.

The races were broadcast live on Fox Sports and online via several streaming services. Supercars reported an audience share of over 150,000 viewers for the two-hour broadcast.

Scott McLaughlin of the Shell V-Power Racing Team won the first and a carnage-filled final race while the second race was won by Supercheap Auto Racing driver Jack Le Brocq in a controversial finish.

At one point he was as high as second place in Race 2 courtesy of the reverse grid, but eventually fell down the order after the mandatory pit stop sequence.

Reynolds said he enjoyed the first event in the Eseries. However, he said the racing shouldn’t be taken too seriously.

“To be honest, my expectations were quite low but I walked away beaming,” said Reynolds.

“I had a really good experience. It was a lot better than I thought it was going to be a lot more fun and a lot more enjoyable. I laughed basically the whole time.

“There was a bit of whinging going on but it’s not real. It’s entertainment and if you’re too serious about it then no one will watch it because it will be dull so what would be the point?

“The more things that go wrong, the more entertaining it will be. No one wants to see us just drive around like in real life racing.”

The opening night saw several incidents that took high-profile drivers out of the running. Of particular note was Rick Kelly’s crash that saw his Ford Mustang skyrocket into the air.

“In the virtual world you can take more risks, you can go for lunges, you can go for gaps and try to pass people way further back than what you would in real life because there are no consequences,” Reynolds added.

“You reset and go again, people need to understand it’s a game, it’s not serious. There’s no prize money. All the cars looked fairly real. They move kind of funny but if I was watching at home, I’d be happy.

“There were a bunch of people up the front driving seriously but most of us were there to enjoy the time and have a bit of banter, crash into each other and have fun.

“That’s what I really enjoyed about it. I probably had the most fun at Phillip Island when they did the reverse grid race and I was at the front and then fell back in the pack and I was defending hard and Fabian crashed into me… I probably deserved it to be honest.

“I tried to catch Jack Le Brocq so I could crash into him but I couldn’t catch him,” he laughed.

“I thought the racing and content created was pure gold,” said Fullwood.

“[It’s] exactly what the people and families from home wanted to see and no doubt there is going to be more action and scores to settle.

“I was a little disappointed not to get better results but excited for what can be achieved if I get it all together which is my aim next week.

“The racing was crazy, there weren’t too many clean passes and my rear bumper had more hits than Elvis.

“It was intense, really tricky to manage the first few laps of the race and avoiding the incidents which I felt I did well.

“I was able to get inside the top ten in all three races in lap one, so that’s a small positive to take away from it all.”

Several drivers were supported by their respective Supercars team members.

Scott McLaughlin had a helping hand from data engineer Richard Harris who coaxed the Kiwi through a tight fuel situation to win at Monza.

While it was a largely fun affair for David Reynolds, team-mate Anton De Pasquale was supported by Super2 Series driver Brodie Kostecki in his front-running performance.

“The whole night was so intense but really entertaining,” said Winterbottom.

“It’s a great concept that Supercars has done to keep our sport alive. It’s so different to the real thing and it’s quite difficult when I hadn’t done any sim racing before so it was all new this week.

“The last race at Monza was awesome but I hadn’t done a full race-run around there before so when my tyres started to go I was in a bit of trouble.

“I had Rory Jackermis on the radio who’s usually Scott Pye’s data engineer.

“He was my spotter and we had the interaction of the team and the focus and concentration of the driving element that this series provides.

“It’s as close to the real thing you can get and while we’re in isolation it keeps our eye in and keeps us practicing our race craft.

“I’m definitely a lot more comfortable in the real race car but I was struggling not to spin on my own let alone fight for the race lead, I’m not losing focus that what I want to do is get back on track as quickly as possible.”

Team 18 stable-mate Scott Pye was also helped by his team in the races with finishes of 18th, 12th and 12th across the three races.

“It was a great night and a successful event that Supercars put together,” said Pye.

“I had one of our mechanics Wayne Bourke on the radios tonight calling strategy as he has a lot of sim experience himself and he did a great job.

“It was cool having someone in the ear as a spotter for what was happening throughout the race.

“At the end of the day we all wanted to do well and I kept learning in each race and I’m really keen to get back out there next week.”

After a crash that nearly took out the entire field, several drivers said they hope the racing will be cleaner come Round 2 next week.

“But as with real-world racing, the best way for me to avoid the carnage is to try and improve my level of competitiveness and get closer to the front of the field.

“So plenty more time in the sim over the next week is on the cards.”

Brad Jones Racing driver Jack Smith added, “The racing was very interesting. I’m not sure if anyone noticed but there were a lot of crashes. I found it a lot of fun.

“I think the general driving standards needs improving but I can definitely understand how easy it is to crash.”

Round 2 of the BP Supercars All Stars Eseries gets underway on April 15 at 19:00 AEDT and will be live streamed via Speedcafe.com.