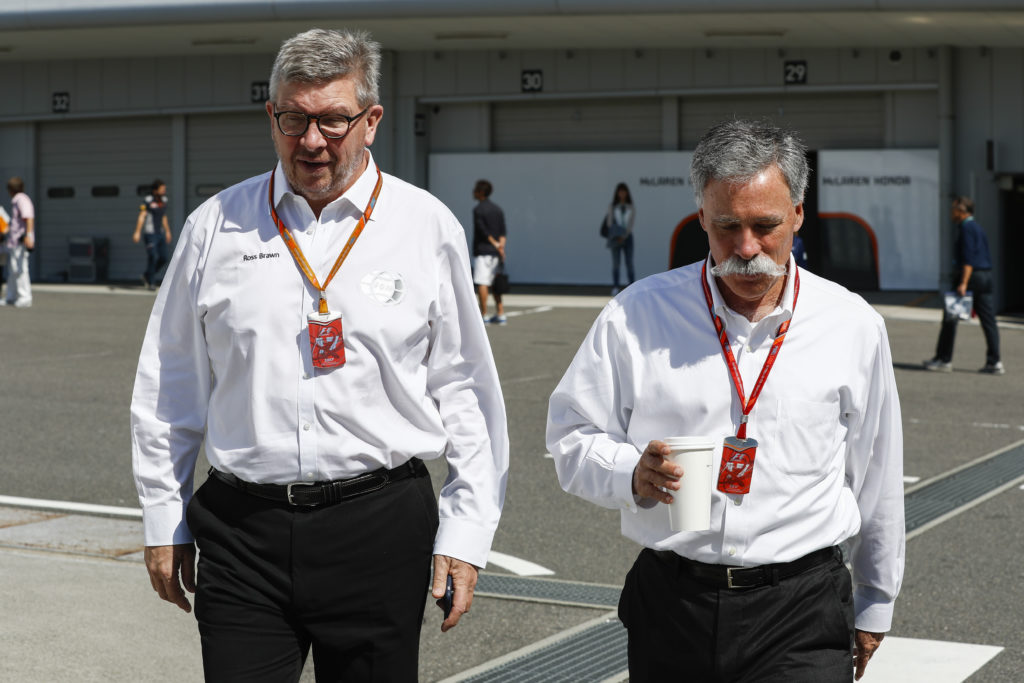 Speaking on the latest Sky Sports F1 Vodcast, Brawn said the championship has to complete a minimum of eight events to award the Drivers’ and Teams’ titles.

As more races either get cancelled or postponed, of which there are two and seven respectively, Brawn has outlined his hopes to get the championship underway and finished.

“Eight races is actually the minimum we can have a world championship, within the FIA statutes,” said Brawn.

“We could achieve eight races by starting in October. So if you wanted a drop-dead point, it would be October.

“But then there is always the possibility we could run into next year.

“That’s assuming we finish this year. And that’s being explored. Can we stray into January to finish the season? There are all sorts of complications, you can imagine, with that.”

Brawn has previously mooted the idea of having condensed two-day events and short turnarounds between meetings.

He said organisers are still aiming to contest up to 19 races in the year with a start in Europe earmarked for July.

“But we have looked at all the logistics, and we think we can hold an 18 to 19 race season if we can are able to get started in July. So the choice is anything in between those two numbers.

“We may have some two-day races in order to meet the logistical needs. For instance, China looks like it will probably be a two-day race if we go ahead with it, because to get there and get away from it to the next race we are planning, it could easily be a two-day race.”

Formula 1 and the FIA is currently consulting with teams, evaluating logistics for races behind closed doors, as well as reducing the risk of COVID-19 infections.

The first round on the Formula 1 calendar is currently slated to take place at Circuit Paul Ricard with the French Grand Prix on June 26-28.

Brawn believes the first round of the championship could take place behind closed doors and be ‘fairly self-contained’.

“Our view is that probably a European start will be favourable,” said Brawn.

“And that could even be a closed event – we could have a very enclosed environment, where teams come in on charters, we channel them into the circuit, we make sure everyone is tested, cleared, there is no risk to anyone and we have a race with no spectators.

“That’s not great, but it’s better than no racing at all. I think we have to remember there are millions of people who follow the sport, sat at home.

“A lot of them are isolating, and to be able to put on a sport, and keep the sport alive and entertain people would be a huge bonus with this crisis we have. But we can’t put anyone at risk.

“We’re looking at the organisational structure that would give us the earliest start, but also the ability to maintain that start.

“There’s no point having a start and then stopping again for a while and having another start. I think it’s most likely to be in Europe, and it’s conceivable that it could be a closed event.”

Races in Azerbaijan, Bahrain, Canada, China, Netherlands, Spain, and Vietnam have all been postponed. The Australian Grand Prix and Monaco Grand Prix have both been cancelled.