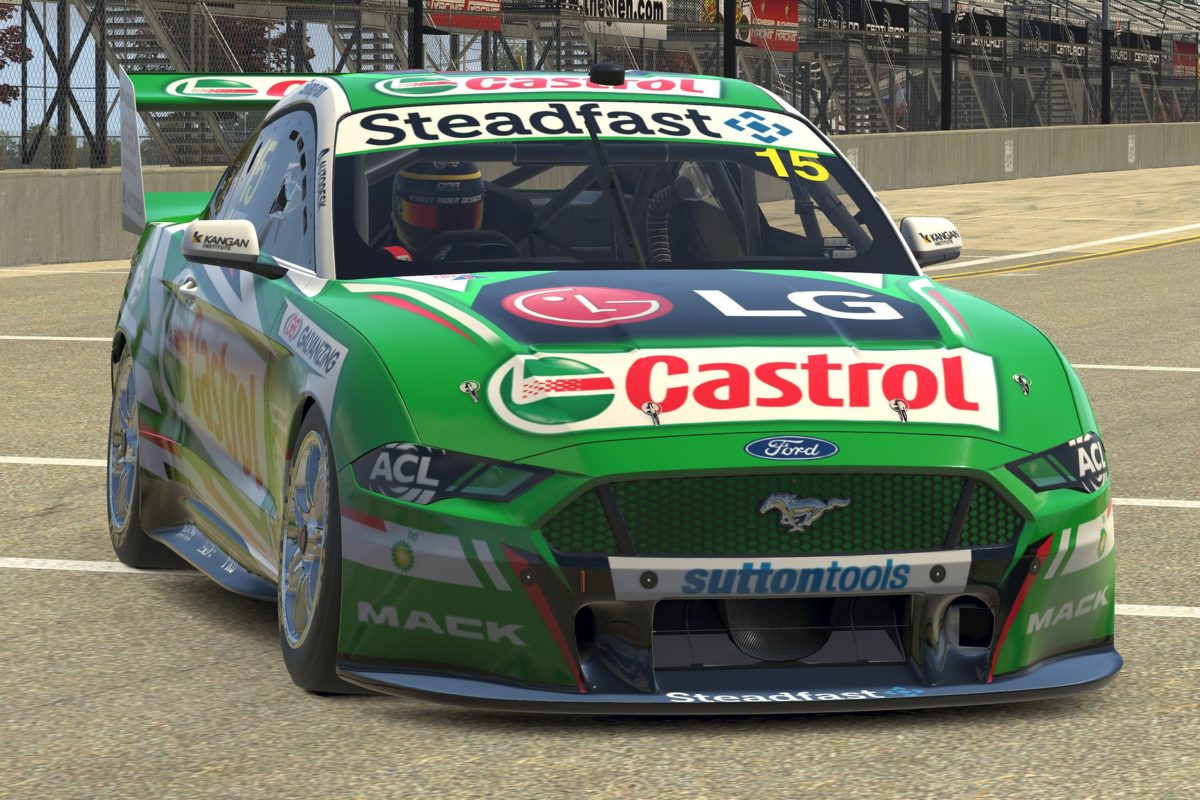 Having built his simulator out of wood just in time for the first round, Kelly made his virtual racing debut as part of a 25-car field.

The opening round saw the series race at the virtual Phillip Island Grand Prix Circuit and Autodromo Nazionale Monza.

The night started poorly for Kelly, who crashed at high speed on the front straight and was collected by another car.

That sent his Ford Mustang skyrocketing and out of the first race.

“It was really challenging for me, I’ve got to say I think it’s the most uncomfortable I’ve felt in a race car even though it’s not a real one,” said Kelly.

“I had a massive crash coming down the straight at Phillip Island there, biggest crash I think of my entire career.

“I got turned into the fence, flipped upside down, then a car hit me and threw me into the sky a little bit like a helicopter, I’m not sure if the car has actually landed yet.”

Having been classified last, Kelly started the reverse grid race from pole position. However, he didn’t fare any better in the second outing after getting hit by Lee Holdsworth.

The night was dominated by the young guns with Scott McLaughlin scoring two wins for the Shell V-Power Racing Team while Jack Le Brocq claimed a win for Supercheap Auto Racing.

Kelly said he’s still got some learning to do after his first three races in the Eseries. In the end, he recorded finishes of 25th, 22nd and 15th.

“The technology side of it I still haven’t come up to grips with, nor have I the driving so a bit of work to do but what a fantastic first go for everybody,” he said.

“A lot of us are pretty inexperienced with Eracing so it’s tough to keep the car on the track at the best of times so made for really exciting racing.

“I’m sure we’ll all be spending a lot of time practicing for the next week ahead of the next one.”

Team-mate Andre Heimgartner had a relatively quiet night with finishes of fourth, fifth, and sixth for NED Racing.

The highlight of his night was a reverse grid effort that saw him come from 21st on the grid to crack the top five at the chequered flag.

“The first Eseries round was quite good, we managed to stay out of trouble for the most part and get some solid results which hopefully we can improve on next time,” said Heimgartner.

“I’ve definitely got a bit of work to do now to try and catch the guys ahead and be a bit more competitive but overall happy with how everything went and a good start.”

“It was surprisingly fun and really enjoyable to compete in, it was good to be back on the race track with all of the guys even if it is in the virtual world.

“We had some good battles and banter throughout the whole thing, some of the crashes were really funny, so I’m really looking forward to doing it all again next week.”