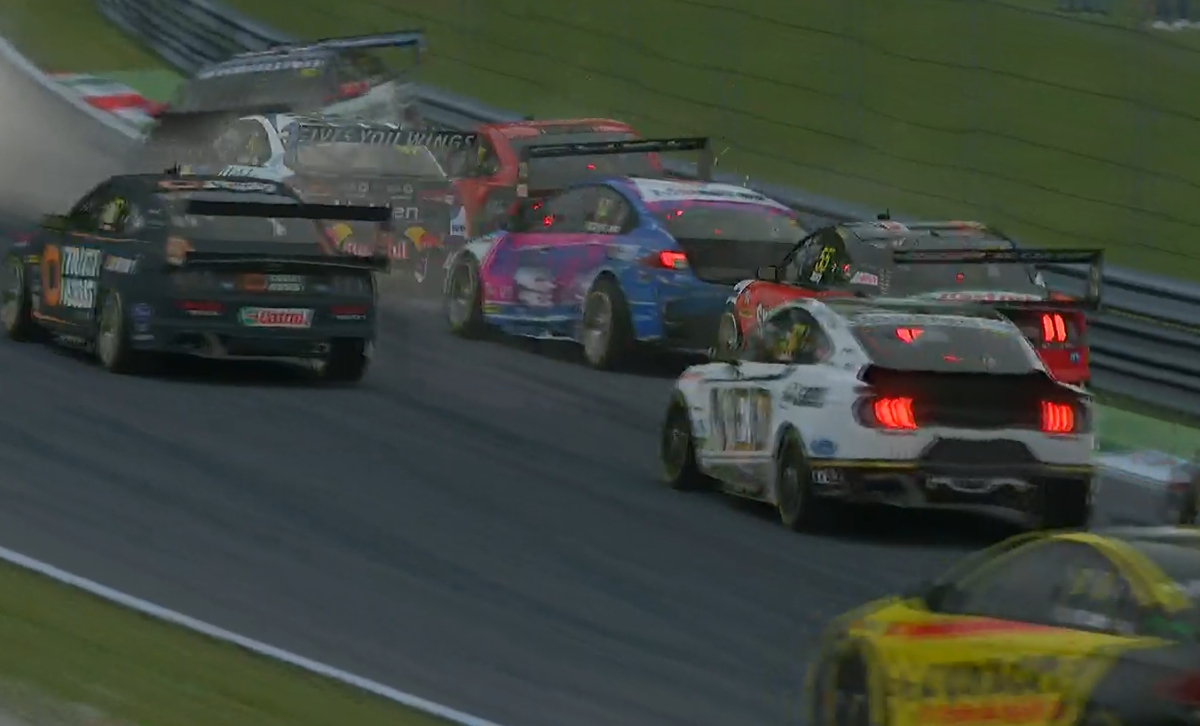 The opening lap carnage at Monza

Scott McLaughlin has taken his second Supercars All Stars Eseries win at the end of a carnage filled 19 lap encounter at Monza.

It was a fine recovery from the Shell V-Power Racing driver after he found himself pointing the wrong way in the early stages of the race.

The New Zealander raced his way to the front, passing Cameron Waters in the final third of the race to take the chequered flag.

Chaz Mostert was third, five seconds off the lead, ahead of Will Davison and Supercheap Auto Racing’s Jack Le Brocq.

Anton De Pasquale started from pole but lost out on the jump off the line to Scott McLaughlin.

Chaz Mostert was a victim at the opening corner while further back Mark Winterbottom pinballed through the field on approach to the first turn.

There was further carnage at the Curve Grande with more than 10 cars involved in a massive crash that left much of the field carrying damage before half of the opening lap was complete.

Alex Davison was served by Cameron Waters under braking into the first corner, the pair having just been back in the lane for repairs.

In response to the chaos a Safety Car was deployed to neutralise the field with McLaughlin leading Kostecki and De Pasquale the top three.

At the end of the third lap the leaders took to the lane to take their compulsory service, filling up 25 litres of fuel.

McLaughlin won the race out of the lane from Hazelwood who gained through the pit stop sequence.

It was Waters, however, who headed the field after stopping at the end of the opening lap, with Alex Davison, sans bonnet, second, and Mostert in third.

A good jump from Waters saw him have an air gap as the field fanned out behind him.

Mostert found himself pointing the wrong way as too did McLaughlin at the opening chicane as Winterbottom moved to second and Le Brocq in third.

De Pasquale’s race effectively came to an abrupt end after he found himself in the wall on approach to Variante Ascari.

The Penrite Racing driver had been dicing with Chris Pither, who was assessed a drive through penalty for the incident.

Jake Kostecki was also handed the same punishment after he tagged Coulthard, sending the DJR Team Penske driver into the weeds at the first Lesmos.

At mid-distance Waters headed Winterbottom and Will Davison, McLaughlin and Le Brocq, the latter two embroiled in battle.

Le Brocq quickly fell off the back of McLaughlin who promptly caught and passed Will Davison for third on Lap 12.

Two laps later McLaughlin put a move on Winterbottom for second place, immediately launching an attack on Waters for the lead.

It forced the Monster Energy driver to defend into the Variante Ascari, only to lose out half a lap later to take the lead on the brakes in the first chicane.

Behind, Mostert looked to go the long way around on Wintebottom at the Curve Grande, but was unable to make the move stick as they duked it out for third.

The Walkinshaw Andretti United driver then fired it up the inside on approach to Variante Ascari, bouncing over the kerbs but taking the place from his former team-mate.

Will Davison was the next to line Winterbottom up, the Irwin Racing driver dropping it at the first chicane as Davison showed the nose under brakes.

Fuel concerns for McLaughlin in the closing stages came to nothing as the race was called a lap early, his margin of victory 1.483s with just over a litre of fuel left in the tank.

Waters was second, with Mostert 5.051s away from McLaughlin after the 18 lap affair.

The Supercars All Stars Eseries continues on April 15 with races at Silverstone and Barcelona.