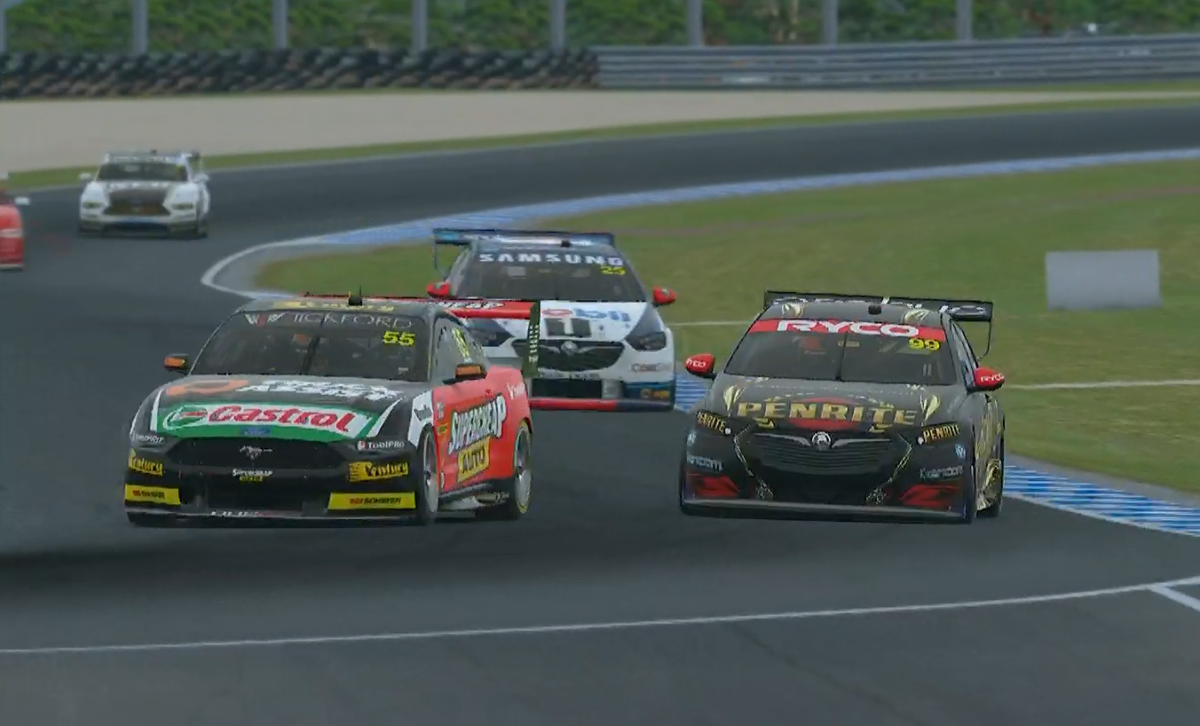 Jack Le Brocq has claimed victory in the second race of the BP Supercars All Stars Eseries race at Phillip Island after final corner contact with Anton De Pasquale resulted in a penalty for the Penrite Racing driver.

Le Brocq started second in the reverse grid affair, moving quickly into the lead which he held for much of the race.

A hard charging De Pasquale reeled the Supercheap Auto Mustang in before a frantic final lap battle resulted in contact which pitched race leader Le Brocq sideways almost within sight of the flag.

De Pasquale was able to scamper through and take the win, only to cop a post-race penalty.

Rick Kelly held pole courtesy of finishing the opening race six laps down, but lost out at the start.

Le Brocq moved into the lead, David Reynolds slotting into second from Mark Winterbottom in a somewhat more sedate start than the opening nine lap race had offered.

A moment for Lee Holdsworth left him banging doors with Kelly at MG, firing the Castrol Mustang off the road and down the order.

Shane van Gisbergen’s race came unstuck after he was engaged in a tussle at Turn 3 with Holdsworth and Will Davison.

The stricken Red Bull Holden Racing Team entry was then also tagged by Jack Smith, which fired van Gisbergen into the wall on the exit of Siberia.

Mostert stopped at the end of Lap 5, rejoining just ahead of De Pasquale who dived underneath the Walkinshaw Andretti United driver as they approached Turn 1.

Le Brocq pitted from the lead at the end of Lap 7, handing the lead to Coulthard as he rejoined fifth, just ahead of the De Pasquale/Mostert squabble.

Running long before serving their compulsory stops, Coulthard and Waters took to the lane with 11 of the 16 laps in the books.

It saw Coulthard rejoin eighth and Waters 12th as Le Brocq regained the lead from De Pasquale and Mostert.

As the laps ticked down De Pasquale edged his way towards leader Le Brocq, the margin less than a second with three tours remaining.

While that was happening ahead, Race 1 winner McLaughlin found himself battling Bryce Fullwood for fourth.

By the start of the final lap De Pasquale was shadowing Le Brocq for the lead, the pair almost making contact into the first corner.

There was precious little between the pair throughout, Le Brocq defending at Turn 3 and again at MG.

De Pasquale looked underneath at the final turn, pushing Le Brocq off line and seizing the lead to take the chequered flag first only to pick up a 30 second penalty.

Le Brocq crossed the line second by three tenths from Mostert while Fullwood held off McLaughlin.

The Top 10 was completed by Andre Heimgartner, Zane Goddard, Coulthard, and Nick Percat.