Ty Freele is the most decorated Supercars no.1 mechanic in the pit lane

There is undoubtedly no other Supercars mechanic in the pit lane as successful as Ty Freele of Triple Eight Race Engineering.

Freele has been Jamie Whincup’s right-hand man since day one, along for the ride in all 119 of his Supercars race wins.

It’s a journey that began in a Blue Mountain town called Springwood where Freele was born, raised, and went to school.

Straight out of college at Year 10, Freele began an apprenticeship as a mechanic at Winmalee Car Care.

Not long into that, he was approached by schoolmate Colin Sieders, working after hours on their Super Truck and other projects.

As the story goes, Sieders bought a pair of EL and EB Ford Falcons for the then known second-tier Konica V8 Lites Series in 2000.

It wasn’t long before the team entered a wildcard for the Bathurst 1000 later that year and at just 18 years old Freele was working on a V8 Supercar.

He was coming to the end of his three-year mechanics’ apprenticeship when a friend, who was working with V8 Supercar team Briggs Motor Sport, spotted an opening.

“I had just finished my time as a mechanic at Winmalee Car Care and he said, ‘well why don’t you send your resume through. Give them a ring. I’ll put a good word in for you’,” said Freele.

“I did and literally two weeks later I was out of there, straight up to Queensland.

“I drove all the way up in my Toyota Hilux with my dirt bike and my clothes. Got about 10 hours up the road and found I was at Springwood again.

“I never knew there was a Springwood in Queensland. I thought ‘I’ve done a big bloody circle here’,” he laughed.

“That was the start of it all. I drove up on a Friday and basically went to work on Monday, and 18 years later haven’t stopped.” 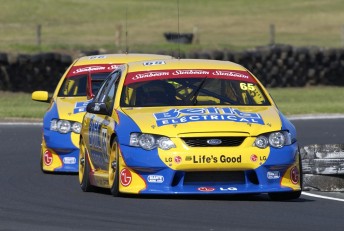 It wasn’t long before Freele was building his first V8 Supercar, taking parts out of the old AU Falcons before building the iconic bright yellow BA Falcons for the 2003 season.

His first season with Briggs wasn’t one to savour. Freele was Canto’s no.2 mechanic in a year that saw them score just one top 10 finish.

He recalled, “It turned out to be the Devil car. Deano lost all his hair. It was a hard year. We crashed a lot.”

Freele hadn’t been working at the team long before it was taken over midway through 2003 by Roland Dane, an unknown name to most at the time.

His first impressions of Dane are still fresh in his mind.

“He was pretty strong,” said Freele.

“You never even knew this bloke, but he had power over the room. He was introduced; this is Roland, your new owner.

“They sat us all down in the café. Mate, I’ve never had 20 blokes just shut up so quickly.

“Just the power he walked into the room with you’re like, ‘Oh, we’re onto something here. This guy knows what he’s doing.’

“Back in the Briggs days, we were struggling. We were racing tractors and he said ‘I’m going to bring some people and we’re going to make this thing work.’

Ludo Lacroix soon joined the team from the UK division of Triple Eight having had success in the British Touring Car Championship and the DTM. After Dane and Lacroix, three-time Supercars champion Craig Lowndes joined in 2005 and Jamie Whincup a year later in ‘06.

It was that sequence of changes that Freele believes changed the dynamic of the team and quickly turned them into championship contenders in just three years.

In 2006 the relationship with Freele and Whincup began. However, before his arrival to the team, Freele said he had no idea who Whincup was.

“You’d see his name on the timing screen, but you’d never think twice of it,” he said.

“You’re not really paying attention to a teenager, or not even a teenager at that stage, a young punk driving for this GRM team.

“I didn’t really think anything of it. Then, next thing I knew, there are pictures of him on a sack trolley, wrapped up in glad wrap, getting dumped out the front door.

“I kind of did look at Jamie and said, ‘Well at least he looks like a race car driver.’ Might be on the chubby side, but you fix that pretty quickly.

“So he came across and that first year, he was just awesome. Just pure dedication.

“He just didn’t sit back like a little kid, like most people would if you had Lowndesy right next door to you. I think by a year of having him there, he was teaching Lowndesy things.”

Of the 119 wins that Whincup has accrued, the four Bathurst 1000 titles, and the seven Supercars championship, Freele still believes the first win is one of the sweetest.

In only his second race with Triple Eight Race Engineering in ’06, Whincup stood atop the podium with brothers Rick and Todd Kelly alongside him. 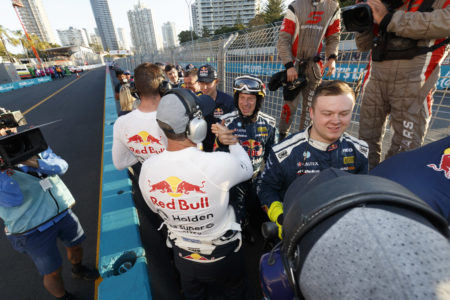 Freele celebrates at the Gold Coast 500

Kelly won the championship that year, edging out Lowndes, but a year later in ’07, it was Whincup doing the winning and taking the crown in just his second season with the team.

“Obviously his first win I think was right up there,” he said.

“That first year. That was pretty amazing to get a new kid on the block, and I’d been there for quite a while at that stage, so you’d seen a few drivers, and this guy turns up.

“When you get a new driver, you take them on without any doubt.

“You go, ‘Look, I’ll give you everything I can’, but in the back of your head you’re going, ‘Is this going to be another year of fixing crashed cars, or are we going to have something good?’

“Oh, we had something good.

“He has just been a true, true, true champion. I’ve never come across anything like him in my life. In any sport I’ve ever watched.

“He is so focused. Has such big willpower. You never have any doubt in your head he’s not going to turn up being 100 percent. Which is pretty cool to have in a driver.”

Speaking of his success in the sport to date, Freele said, “Yeah, I’m not bragging, but I think you’d struggle to find a mechanic in pit lane who’s had as many wins as I have.

“I’ve never been a Lowndes or a Shane or Radisich or whoever else we’ve had over the years. But yeah, I’ve always been in that corner of the workshop.”

Drivers, engineers, and mechanics come and go in Supercars, but Freele has decided to stay put with the team he calls his family. “You put three years into it, and that’s three years of your life that you will never get back. So, by the time you get your fifth year, you can’t remember what the real world was like.

“You know so much about this one thing you do, why give that up? Then, that’s part of it. That’s my personal part of it. Why spend all this effort, and doing another apprenticeship as such, learning motorsport at this level, then just to give it up or change teams.

“Why I haven’t changed teams is because of people like RD and Dutto. They’ve just made it such a hard but family kind of environment.

“They are my family. I don’t have many other friends. I don’t have family in Queensland and you stay there because of the culture that RD put into the place.”