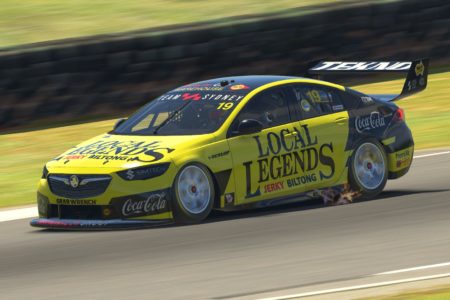 Supercars may have never raced at Monza before, but a handful of drivers will be able to draw real-world experience ahead of the opening All Stars Eseries event.

A circuit synonymous with Formula 1 and the Italian Grand Prix, the historic circuit will be the second stop on the virtual calendar in the BP Supercars All Stars Eseries.

Red Bull Holden Racing Team driver Shane van Gibsbergen has had the most success of the trio at the circuit with a win in the then known Blancpain GT Series Endurance Cup.

Scott Pye raced at Monza once in the early stage of his single-seater career as part of the British Formula 3 Championship.

However, Alex Davison is arguably the most experienced with a Porsche Supercup drive back in 2002 as well as a 1000 km race as part of the Le Mans Series in 2008.

It was the only circuit he didn’t score a podium at that season on his way to second in the GT2 championship.

In the lead up to the opening event on April 8, Davison has been clocking laps on the Italian circuit.

Speaking with Speedcafe.com, Davison said it didn’t take long for him to get refamiliarised with the simulated circuit.

“It’s been a long time since I raced at Monza but it feels like yesterday,” Davison said.

“Going on to the simulator and driving on there, it came back to me straight away.

“It’s a fantastic track and is one of the very few remaining old school tracks that hasn’t been heavily modified by modern circuit designers.

“It’s crazy how realistic (the tracks) are, it feels like you’re there,” he said of the simulated circuits in iRacing.

“The kerbing and the angles of the corners, the general way the tracks flow is super realistic.

“That part of it makes it easier. When you go to a track in the sim that you’ve been to in real life, you don’t have to learn the track at all.

“Even the braking points and those types of things are very, very close.”

Davison said he is being realistic about his chances and knows the younger drivers will be on the pace.

However, he was surprised to see how far off the pace he was in the first practice with other Supercars drivers.

The Team Sydney driver said a lot of that deficit comes down to experience on a simulator and knowing the limit of the car through visual and auditory aids.

“I thought I was going pretty good until the official practice that we’ve been having with the other drivers, then I realised I wasn’t going that well,” he laughed.

“It felt normal. It felt like you would drive a normal car. I felt like I was on the limit and couldn’t brake any later, you just use your normal instinct and feeling. There are things you can do on a sim that you can’t necessarily do in the car.

“In a real car, you can feel the tyres squirming on the limit of adhesion through your backside whereas you don’t have that in the sim. There’s quite a big chunk of time you can find from just being experienced.

“You need to retrain your instincts a little bit, nearly away from the instincts and natural feelings you use in a racing car because you’re getting your feedback and information from different areas.

“You’re not getting them through the seat of your pants. You get a lot of information from sounds instead of feelings and maybe lights on the dash. It’s definitely a learning experience.”

While Davison isn’t over-optimistic about his chances, Pye has been spending plenty of time on the simulator and believes he’ll be able to get himself into a competitive position.

“There are obviously a couple of guys that have been quick and have been doing this for a long time,” he told Speedcafe.com.

“I feel like I’ve been going well and have had a blast doing it. As it gets closer we’re all starting to take it more serious and do more laps.

“This can’t be taken too seriously, but at the same time, we’re all competitive and won’t want to be running around the back.

“That means we’ll be spending a lot of hours on it to be competitive come race day.”

Pye said fans should expect carnage in the second race as a field of 25 cars barrels into the tight chicane at Monza.

“The racing is going to be exciting,” he said.

“There’ll be plenty of action, for sure. I hope they’re lenient on the action as well, I think we should be able to run doors.

“There are no repair bills at the end of it so we should be able to have a bit of fun with it and put on a good show.

“There’s going to be some people being pretty ambitious into turn one at Monza, I’m probably one of those.

“Everyone is going to have a dip. You’ll see some big lunges at Monza, that’s for sure.”

The first round of the BP Supercars All Stars Eseries gets underway on April 8 at 19:00 AEDT and will be live streamed via Speedcafe.com.