David Brabham with the BT62

Recently we reintroduced our weekly ‘Where are they now‘ feature as a part of Speedcafe’s commitment to entertain and inform during the Coronavirus pandemic.

In many ways it was a response to reader feedback and we’ve had lots of great suggestions for future interviews as well as some from our archive you would like brought back and updated.

This latest installment is also part of our Brabham Week presented by Pirtek, which has been a tremendous success.

This edition has been written by Rusty’s Garage podcast host Greg Rust who joins the Speedcafe.com editorial team for the first time.

It was never a certainty that Sir Jack’s youngest son would follow in his famous father’s footsteps. David seemed more interested in soccer as a youngster and mucking around on the family farm after the Brabhams moved back to Australia from England.

“Dad really didn’t want any of us (his sons) to go racing to be fair. Some of that is down to the fact that he went through a very dangerous period and lost a lot of friends. He retired mainly because of Bruce McLaren going in 1970 and Jochen Rindt….two of his mates”

Less than four years after McLaren and Rindt’s deaths and Sir Jack’s decision to stop racing in Formula One David’s eldest brother Geoff got behind the wheel.

As Geoff progressed and went on to have his own successful international career, particularly in America, David went off to an agricultural boarding school and was being groomed to be a farmer.

He left school at 16 and travelled to the USA for three months to watch Geoff race. It was life changing.

Until then ‘Brabs’ had only roared round the farm in a paddock basher steel framed kart with a Briggs and Stratton engine.

After returning from the States David was hooked and went halves with his neighbour in a proper kart after watching some races at the track in Griffith.

He can still vividly recall the horror on his Dad’s face when he broke the news to him that he wanted to go racing.

David still carries the scars from his first ever meeting to this day. It ended with a trip to hospital. He barrel rolled after contact with another kart attempting a fearless inside passing move. The debut ‘jeans and jumper’ race outfit didn’t provide much protection.

Sir Jack thought that was it….David would be done with racing as soon as he started.

Brabs got back “on the horse” though and his legendary father realised during a race meeting in greasy conditions in Orange, in central west NSW, when David won by half a lap, that it was going to be more than a hobby.

RIP Sir Jack, 94 today. When your 3 times F1 World Champ father leans over the kart and gives advise you listen. He said “David, if you want to go faster… use less brake and more throttle”. He gently smiled and walked off. Miss you. #F1 #RIPBlackJack pic.twitter.com/l2coei4GxJ

Mutual sponsors/connections of Jack’s helped David move into cars with an opportunity to join the hotly contested new Ford Laser one-make series in the mid ‘80’s. They got a car last minute and raced prominently in a quality field that included Mark Skaife, Peter Dane, Mark Gibbs and more.

He looks back now and says that he didn’t properly learn to ‘heel n toe’ in the Lasers. That driving finesse started to come in 1986 when he moved into Formula Ford. Single seater racing was always the target. 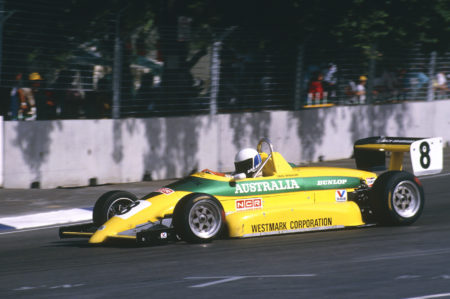 There were times when David and Jack’s relationship was tested. They weren’t talking at all before the 1987 Australian Drivers Championship – a Formula 2 race in Adelaide in front of all the F1 teams at the Australian Grand Prix that year.

Sir Jack questioned his commitment to racing. He believed that it had to be a selfish pursuit. No girlfriends or other distractions.

“I tried to bridge the gap by starting a simple conversation around his F1 hard card. I said you better get me one of those. Jack replied “Well the days of you ever getting to Formula One are gone!

David was livid! He started the race from the back of the grid after car trouble during qualifying. Determined to prove a point he went from 38th to 17th on the first lap and ultimately won the 15-lap race without putting a mark on the car.

“Afterwards I felt like I went to a different dimension. That was my gift,” said David.

“I took a lot of what I learnt there into my career. You see it as a negative to begin with but for me it was an absolute blessing and it catapulted me to Europe.

“Dad and I were mates again” he says with a reflective laugh.

He learned to assert himself and what he wanted as a driver during this period and the importance of motivating a team in that front line role.

The family name came with a weight of expectation, particularly in England. F3 helped him cement his own identity and start to step out of Jack’s shadow.

David duked it out with Michael Schumacher that year too finishing on the podium in the first leg of the famous Macau Grand Prix and winning the second.

The F3 success gave him a Super License for F1 but this part of David’s CV, sadly, didn’t yield the kind of results his father achieved. It certainly wasn’t for lack of trying on and off track.

Most fans will remember David’s courage and leadership at Simtek during the 1994 season especially that fateful weekend at Imola when his teammate Roland Ratzenberger was killed in a crash the day before the legendary Ayrton Senna died.

“That whole weekend was just black,” said David looking back.

“It was heavy! My leg was bouncing with adrenaline. It was pumping (when they went back out after Roland’s crash).

“I didn’t make the decision to race until after the morning warm-up which actually went pretty well. We finished top 15 from memory.

“I came into the pits and I sensed this cloud over the team had shifted slightly. There was some hope.

“It’s unusual for a team to race after that (the death of a teammate). Normally you pull out but I continued on for (Roland) the team and the people.”

The biggest and most successful portion of David’s racing life was spent in sportscars, a door that first opened during the challenge of trying to stitch together opportunities to stay in F1.

He drove for Bentley, Jaguar, Aston Martin, Peugeot and Panoz to name a few.

An outright win at the Le Mans 24 hour in 2009 with Peugeot was a highlight. There were class wins at the Circuit de la Sarthe too and lots of success on American soil.

Brabham thrived in underdog situations and loved rattling the big teams like Audi while racing the Panoz – a front-engined American monster that was the antithesis of its rivals.

Endurance racing suited him and he developed a thorough understanding of the mental side of racing.

“When my mindset was focussed on traffic I tended to get traffic,” said David.

“When my mind was focussed on clear laps I got clear laps. I learned to just let go and be the driver.

“Whatever I wanted to achieve I would visualise with clarity. I wouldn’t put negatives in. I guess I learned to evolve into a place mentally where you can create that magic so to speak.”

Nearing the end of his full time-driving career he channelled that same focus and determination into bringing the Brabham name back as a brand.

He now spearheads Brabham Automotive, a project that has been 15 years in the making. A long and drawn out legal battle to regain the trademark took a heavy toll financially and emotionally.

“I was done. I remember Christmas Day 2012 getting the message that it had finally gone through. I was sitting in my car with 300 quid left in my account. But I had the name back.”

Until then Brabham says he’d really only been in the racing cocoon.

He had to step out into the real world of finance and business to find the right partners. 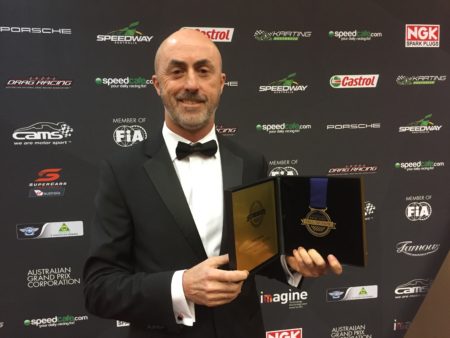 He eventually found Fusion Capital and the dream became reality in a hub of automotive industry in South Australia with another base in the UK, where the Brabham name still has significant cache, servicing the northern hemisphere.

In 2018 the Brabham BT62 was released to worldwide acclaim. A track focussed hypercar with a mid-engined 5.4 litre V8 that weighs just 972kgs and produces 700bhp.

In early 2019 it set a new record at Bathurst during showcase laps at the 12 hour.

Late last year David drove the car to victory on debut in the season finale of the Britcar Endurance Championship at Brands Hatch the same venue his late father won the British Grand Prix in his own car on the way to the 1966 F1 championship.

Brabham Automotive is already well advanced on its next road car project.

There are plans for more racing too. Brabham is waiting for the final version of new regulations for Sportscar Racing and would love to go to Le Mans at some stage in the years ahead hopefully with a Brabham driving.

“The goal for both Sam and Matt is to have a long career in motorsport and I would love to see them racing a Brabham at Le Mans,” said David.

“That is a massive personal goal for me. I think the whole of Australia could get behind a program like that. And we very much look forward to making it happen.”

He’s not one to look back on his own career with any regrets because there is plenty keeping him busy right now.

“Would I love to have done something else along the way?

“I probably would have liked to have done IndyCars and the Indy 500 but it never happened. That’s fine. I went off and did other things.

“I feel very fortunate that I had a much bigger, longer and more interesting career than I thought I would have when I first started in Go Karts.

“I just enjoyed doing it and doing it to the best of my ability and that’s pretty much what I focussed on all the way through.”

David and his brother Geoff, followed in the footsteps of their father when they were inducted into the Australian Motorsports Hall of Fame in 2018.

You can listen to the full Rusty’s Garage podcast with David Brabham here.