CAFE CHAT: Feeney on stepping up to Super2

CAFE CHAT: Feeney on stepping up to Super2 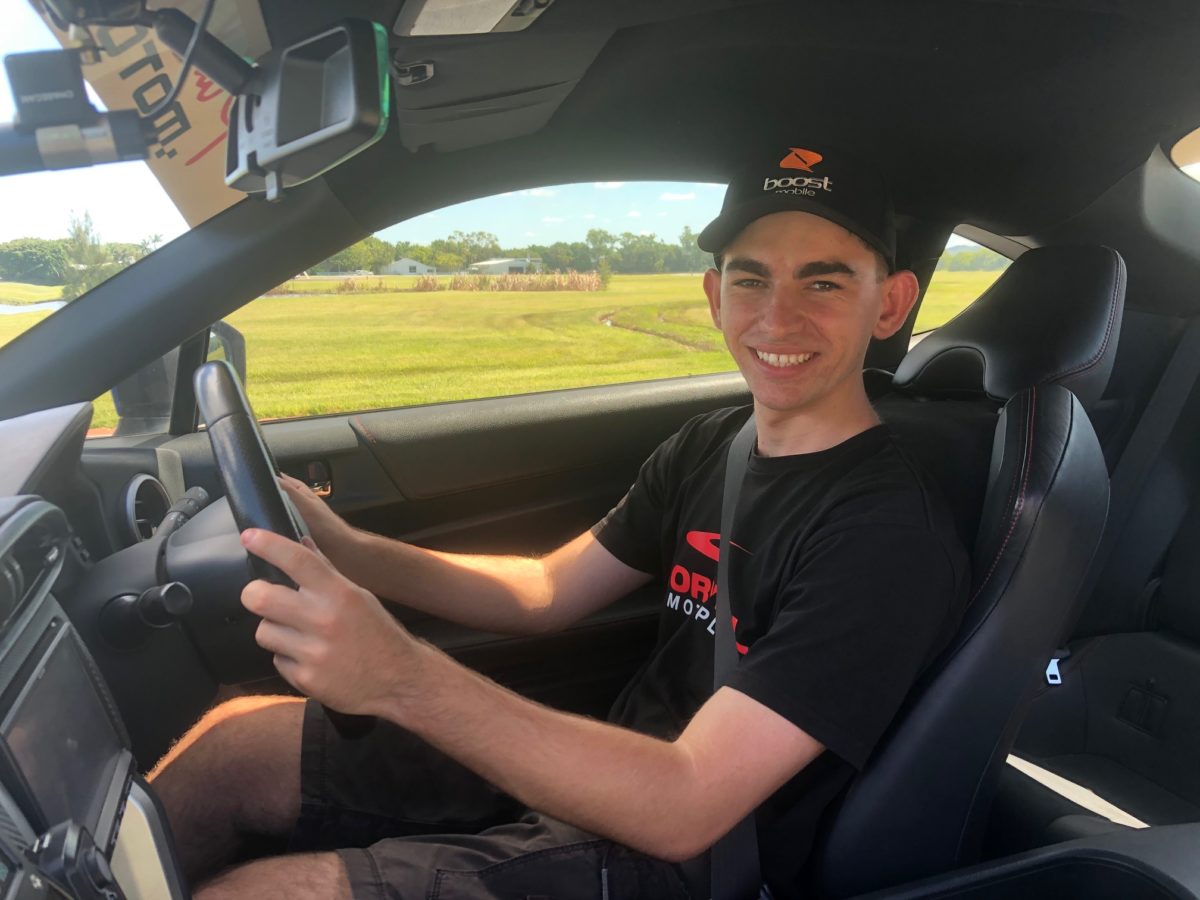 Young racing talent Broc Feeney comes from a well-known motor racing family and has stepped up into the Supercars Super2 category this year.

At the same time he is completing year 12 studies, continuing his mechanical apprenticeship and enjoying mentorship from Australian racing veteran Paul Morris as part of his Norwell-based academy.

Speedcafe.com sat down for a chat with the 17 year-old to find out how he is handling the toughest period motorsport has ever seen.

Speedcafe.com: It has been a whirlwind couple of years for you out of karting. Give us a bit of an insight into where you think your career is at and how much you are enjoying the ride.

Broc Feeney: I’ve been absolutely loving my life to put it nice and short. But as you said, it’s been a really quick couple of years. I had my first car race only a couple of years ago. I was straight out of karts into the (Toyota) 86 and had a pretty successful year in that before moving up to the Super3 Series last year. I ended up winning that and jumped up to Super2 this year. So things have happened really quickly for me and it has been exciting. It has been a challenge, but I love that. I love being at the racetrack.

Speedcafe.com: How has the step up to Super2 been for you and what have the challenges been?

Feeney: It’s been pretty challenging and I’ve obviously only done the one round at Adelaide and that was certainly a pretty difficult weekend. All those guys are on top of their game and have been in there for a fair few years and racing the enduros as co-drivers. So a lot of those guys up the front are well and truly on it and the biggest thing for me was just getting through that weekend nice and clean without hitting a wall. It was my first time there so it was a big learning curve. We got through there pretty clean and with reasonable points.

I was ready to go at Tassie and keep moving forward and actually start chasing those guys down at the front, but obviously things have been put on hold for a while. It’s great that I’ve got Norwell Motorplex here where I can keep in shape for when we go racing again.

Speedcafe.com: As a young bloke, how do you handle the world world turning upside down as it has with the Coronavirus. No one has ever experienced anything like this before. How do you approach what’s happening in the world right now?

Feeney: It is a difficult situation obviously. They’ve already said that the next three meetings of Supercars are postponed and that means our next event is going to be at the end of June in Townsville. So it’s definitely going to be different for me. As you said, I haven’t experienced anything like this before where everything’s been put on hold for about three or four months. So the biggest thing is just to keep in shape, keep my fitness up and keep driving here at Norwell. Paul (Morris) has obviously given me a great opportunity out here to come and keep sharp on my skills. So when we go back to the racing season, it’s going to be nothing different. I would have been in the car plenty of times and I’ll be ready to hit that track running.

Speedcafe.com: You’ve worked together now for a little while, how much influence has Paul (Morris) had on you over the last couple of years?

Feeney: An incredible amount. It’s crazy how much he’s taught me. So a couple of years ago I came here straight out of karts. In January 2018. Dad (Paul Feeney) has known Paul a while and he said, “Yeah, I’ll teach him the basics of cars.” After a year in the Toyota 86 we met back up with him and said, “What’s our plan moving forward?” And he’s looked after me ever since really.  He has been a massive influence for me and sort of been my guiding light, shown me everything that he’s learned over the years he has and built me up to where I am today.

Speedcafe.com: And what about being a part of the Paul Morris Academy?

Feeney: It’s been incredible for me to have Norwell out here where I can come and drive and he can coach me. He’s got great people out here and you get Shane (van Gisbergen) and Anton (De Pasquale) out here to help me out and all those things. It’s been massive for me and to be honest, I couldn’t really imagine it going any different way. It’s been unbelievable and just the opportunities that I’ve been given and the things that he’s led me into. Things like this Tickford deal and all the stuff that I did with Erebus last year and tests with DJR, that’s all come through Paul and how he’s been pushing me.

Speedcafe.com: And how are you balancing your final year of high school with your mechanical apprenticeship and your racing?

Feeney: The past few years haven’t been too difficult. I’ve gone through with a breeze and that’s been fine. My results actually were quite good last year at school so I was quite happy with that. This year is obviously a pretty big challenge. Year 12, the final year, everyone wants to put in their big effort. So it has been a little bit difficult. The first term I missed about the first four weeks of school with Adelaide and the 12 hour and all that sort of stuff. So I’m trying to put my biggest effort on 100% at the track and I’m doing my absolute best that I can in school. And things are obviously going to be very quiet for awhile now so I’ll be able to focus on my studies and keep up to date with that. But yeah, it’s been great. And it’s pretty crazy to still be at school and racing these cars.

Speedcafe.com: I guess for every negative they say there’s a positive I guess the one positive out of this whole coronavirus pandemic is that it’s actually giving you a bit of a break to catch up on all that school stuff and maybe get ahead of yourself.

Feeney: Yeah, exactly. That’ll be the good thing. By the time we go racing again, I should be well and truly back on track and should set myself up for the rest of the year for school. So the biggest thing is sort of just learn all the stuff you need to do and then go and do the test later in the year. So yeah, it’s been great and being able to drive the cars out here (Norwell) will certainly help.

Speedcafe.com: You have grown up in a racing family. Your dad has been around it all his life and obviously had a great long term relationship with Mick (Doohan) and all those guys through their careers. How has that environment influenced your career?

Feeney: Yeah, that’s been a massive thing for me. And from whenever I can remember, I’ve been at a race track. I started racing motorbikes when I was three years old and raced them until I was nine. Every weekend since I was a kid I’ve been at a race track with dad and his motorbike teams or the kart track. And dad being mates with Paul (Morris) and Mick (Doohan) and all that, you’re just like a sponge to them.

We’ll just be talking as friends, but you’re able to soak up the information. It’s just been massive for me. Dad’s tried to keep me on a very straight path and ensure I do not get ahead of myself. He’s been a massive influence for me and kept me grounded. And to have a family behind me that follows me all around Australia and the world in go-karting, it’s pretty incredible.

Speedcafe.com: Why did you end up in go-karts and not pursuing a bike career?

Feeney: I went over to Thailand in 2011 on a family holiday. My brother and I went go-karting there at the hire karts and they don’t have many rules over there so they were pretty quick and we absolutely loved it. When we came home a mate invited me to a ‘come and try day’ at Ipswich Kart Club. Things took off from there. But I’ve absolutely loved it. As soon as I jumped in a kart I knew that’s what I wanted to do. I love motorbikes so much and as a young kid all I wanted to be was a motorbike racer and race MotoGP. But things do change and I’m absolutely over the moon with the choice I made to go four wheels.

Speedcafe.com: And with a name like Broc (Brock), I guess you’re destined to go touring car racing?

Feeney: Yeah, exactly. I’d like to chase that down. I want to make it to the main game one day and try and live up to the name that it is. So we’ll wait and see what happens.