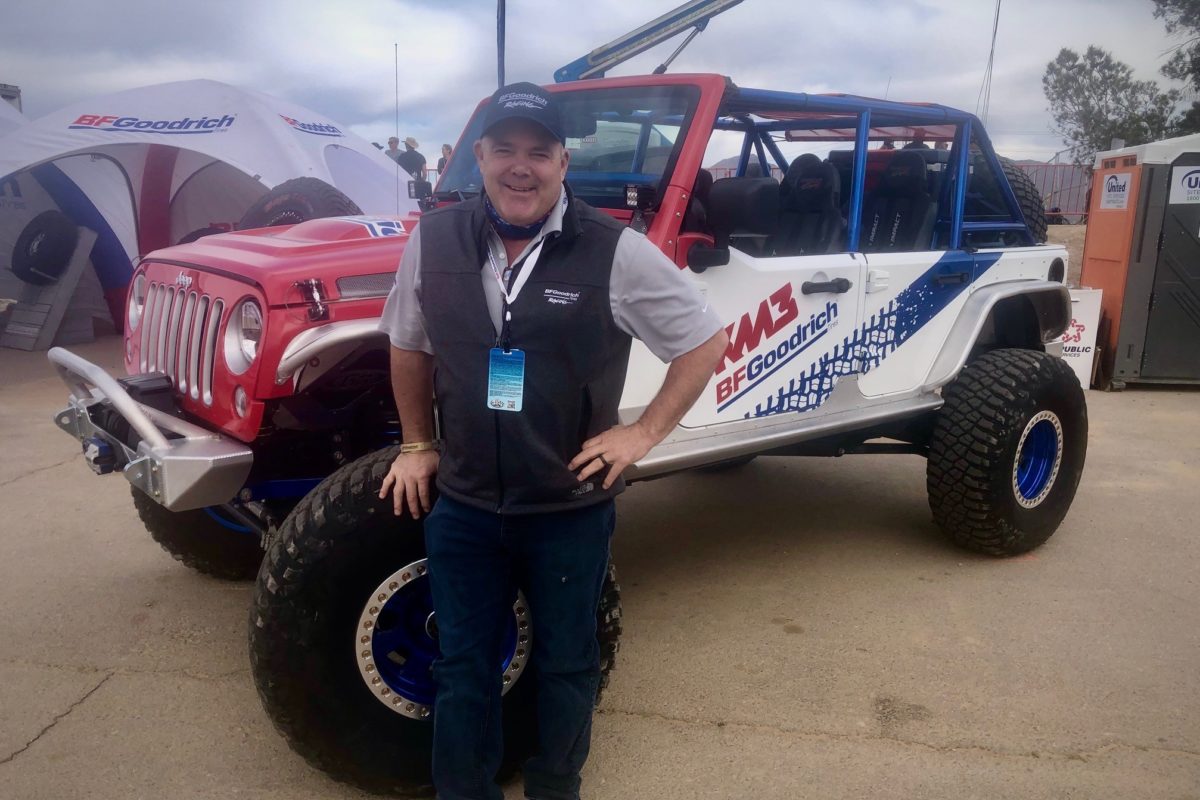 The BFGoodrich Mint 400 is regarded as one of the toughest offroad desert races in the world; four laps of a 120-mile (192km) course, the last of which is run in almost complete darkness.

BFGoodrich is not only the naming rights sponsor but is involved in almost every aspect of the event, including support of individual racers. Four of those filled the first five places at this month’s race, including winner and third-generation racer, Luke McMillan.

Speedcafe.com travelled to the Mint 400 as a BFGoodrich guest and had the opportunity to spend some exclusive time with the company’s Global Brand General Manager, Harold Phillips, to talk the business of offroad tyres and racing.

HAROLD PHILLIPS:  So, we go racing really to develop product. I mean, at the end of the day we started our racing career a long, long time ago because we wanted to try to figure out how to make better tyres. And so, as we evolved in our racing experience, it allowed us to test different compounds and tread designs and technology so that ultimately we can make the best tyre possible for our consumers.

SPEEDCAFE.COM: And how is it different when you come in on an event like the Mint 400, where you’re competing against other manufacturers as compared to a series where you’re the exclusive supplier?

PHILLIPS: Really, we prefer not to be in a ‘spec’ series because we don’t learn as much. We will always prefer to be racing against our competitors, right? And why? Because consumers or racers, both have a choice between brands, and we want to be able to demonstrate our overall toughness, our durability, and what our winning product offers for either consumers or racers versus our competitors. And this is the perfect way to be able to measure all of those things in a really difficult and challenging race that is the Mint 400.

SPEEDCAFE.COM: So, in racing in recent years there have been lots of lies told by auto manufacturers as to why they go racing. For many of them it is now just a marketing spend. Would it be true to say that tyres, lubricants and maybe electronics are three of the few things that can still be developed through real competition?

PHILLIPS:  Yeah, I mean, I can’t speak for other brands or other manufacturers. I know there’s a lot of brands that have learned a lot by racing. I can’t see if you’re a supplier in offroad racing, how you don’t go to this kind of event to try to learn because it’s an extremely harsh environment. The vehicles, more and more, are stronger, heavier torque, bigger horsepower engines, and so no matter what part you’re building for that vehicle, you’re going to test yourself and your ability of that part to survive.

SPEEDCAFE.COM: So, it makes sense for you?

PHILLIPS: We come here to learn so that we can make the next best product. When we come out with a bigger tyre size, we always get complaints, particularly from the suspension industry, because they say, “Oh, now we’ve got to change everything because you’ve changed this tyre size.” And while I can appreciate that, our whole focus is on how do we become a faster, more durable tyre for our racers and allow our race teams to continue to win because we’ve got a history of winning and while we come here to learn, we come here to win.

SPEEDCAFE.COM: So, do you get pissed off if you don’t win?

PHILLIPS:  Yeah, if you don’t get a little pissed off when you don’t win, then you’re really not a competitor. There are times where we’re winning a race and something happens that’s really out of our control, that is really disappointing because you had the race in the bag and then something happened that you can’t count on. But that’s racing. To me, one of the cool things about racing is the unknown and there’s so many obstacles out there. Then you’ve got different driver styles and you’re seeing that when you go driver by driver particularly in the trophy trucks. You’ve got certain drivers that wear on their equipment a lot harder than others. And so that comes into play.

SPEEDCAFE.COM: Is that feeling of defeat and success felt through the BFG business?

PHILLIPS:  If you go to any person in my global BFGoodrich team, the BG Goodrich racing team. Anybody that works on BFG, we’re all passionate. And so you can almost look at our activity profiles outside of work and you’ll see that we’re all adrenaline junkies. We all love to get outside, we love to do things. Mountain climbing, biking, motorcycling, camping, hunting, fishing, anything that’s outdoors. All our people are like that because that’s what their world is. And the one key thing that they all have is an extremely competitive nature. And so if we don’t win, you can pretty much count on everybody being a little bit down afterward.

SPEEDCAFE.COM: How does your level of support at the Mint 400 compare. From racer to racer, customers and guests?

PHILLIPS:  Well, we certainly love to entertain what we call influencers. So, there’s a lot of people on social media that we work with to teach about tyres. If they’re not really involved in driving or motorsports, they might be involved in an outdoor activity that’s very consistent with what we try to do with the brand, which is being an enabler brand. We want our brand to stand for mobility, to encourage consumers to go follow their passions, wherever and whatever that is. And so we involve our influencers, teach them about the brand, bring them into the BFG family, which really is a big family, and that’s a subset. And then we’ve got journalists that are in the industry that want to talk and compare and talk about the racing and what’s going on in the development of tyres, development of vehicles, development of parts. And that’s a certain different subset. But those groups mix well together. And then we, of course, love to entertain our dealers because there’s no better opportunity than to bring our dealers from all over the world to these kinds of events to see the brand compete in its element.

SPEEDCAFE.COM: And what about support at the competitor level?

PHILLIPS: So, we started offroad racing, with a real grassroots focus and we’ve never lost that. And so whether it be this race or the Baja races, we have an almost all-volunteer crew that are part of our pit crew support. And so if you’re riding on BFGoodrich, even if you’re not a professional driver, you can go and have access to that pit crew support changing tires, adding fuel, doing maintenance. We’re sometimes doing emergency work to try to keep that vehicle on the track and in the race.

SPEEDCAFE.COM: So those volunteers are part of the family you talk about?

PHILLIPS: That’s part of the BFG family. And so we love those volunteers. You’ll find that in some of those pit crews, there are volunteers that have been doing it for 15 years after getting the bug. They came along as part of our program, and they’ve never left, because they’re just part of our extended family. And so that’s the level of support that we give everybody. Clearly, you’ve got the professional teams that maybe are a little bit higher level financial support and an advertising support where we use them to speak to groups and talk to dealers and do other things on the educational side. And then we work with sponsors like Red Bull to really start developing this whole younger generation. We are really trying to bring in that next generation of younger racers and audience to our brand, and really show them what a cool, fun, BFGoodrich family it is.

SPEEDCAFE.COM: What about your personal BFG story?

PHILLIPS: So, I’ve been 32 years with the company, started out of college. I was hired as a regional manager trainee and started selling BFGoodrich tyres. I’ve worked in four different countries and sort of midway through my career I had moved to Europe and where I helped launch the BFGoodrich brand. I was then head of Canada for four years for passenger light truck and re-tread. And so that was a different role. And then I’ve come back to BFGoodrich again in this global general manager role. So, it’s been a great journey.

SPEEDCAFE.COM: I have met a lot of people who are ‘long termers’ at BFG.

PHILLIPS:  I think one of the reasons why I’m here is because, throughout my 30-year career, I’ve always had an outspoken opinion about BFGoodrich. Sometimes maybe they haven’t liked what I had to say because I’m pretty direct. But I’m glad to be in this role now that we can really renew the focus on the brand, come out with some really innovative products that are now in development and energize the brand because it’s an awesome worldwide brand. And everywhere I go worldwide whether it’s Australia, whether it’s Russia, whether it’s South America, Europe, it doesn’t matter what language the dealers and consumers that I talk to speak, they all have the same level of enthusiasm and excitement about the brand. And that’s really special.

SPEEDCAFE.COM: How important is the Australian market to BFG?

PHILLIPS: We love Australia, it’s probably our second biggest, longest standing core market. We launched the KM3 in Australia (in 2018). It’s the first time ever as a brand that we’ve launched a global product outside of North America. So, I think that represents a little bit of what Australia means to us, and the support that the Australian team has. I was able to be at that launch; it was really a special experience. I think the Australian market really understands the durability needs for a four-wheel-drive vehicle. And so they appreciate BFGoodrich. We appreciate the Australian consumers because they challenge us. They are very clear and outspoken of what they need in terms of sizes and durability. And they’re good thought partners. So, when we look at developing new products, Australia is one of the countries that we’ll go to first to get feedback from our Australian team and consumers.

SPEEDCAFE.COM: We need to get you out there to the Finke Desert Race.

PHILLIPS: I’ve heard a lot about it and I would love to get out there to see it because I’ve heard that it’s a pretty special race. 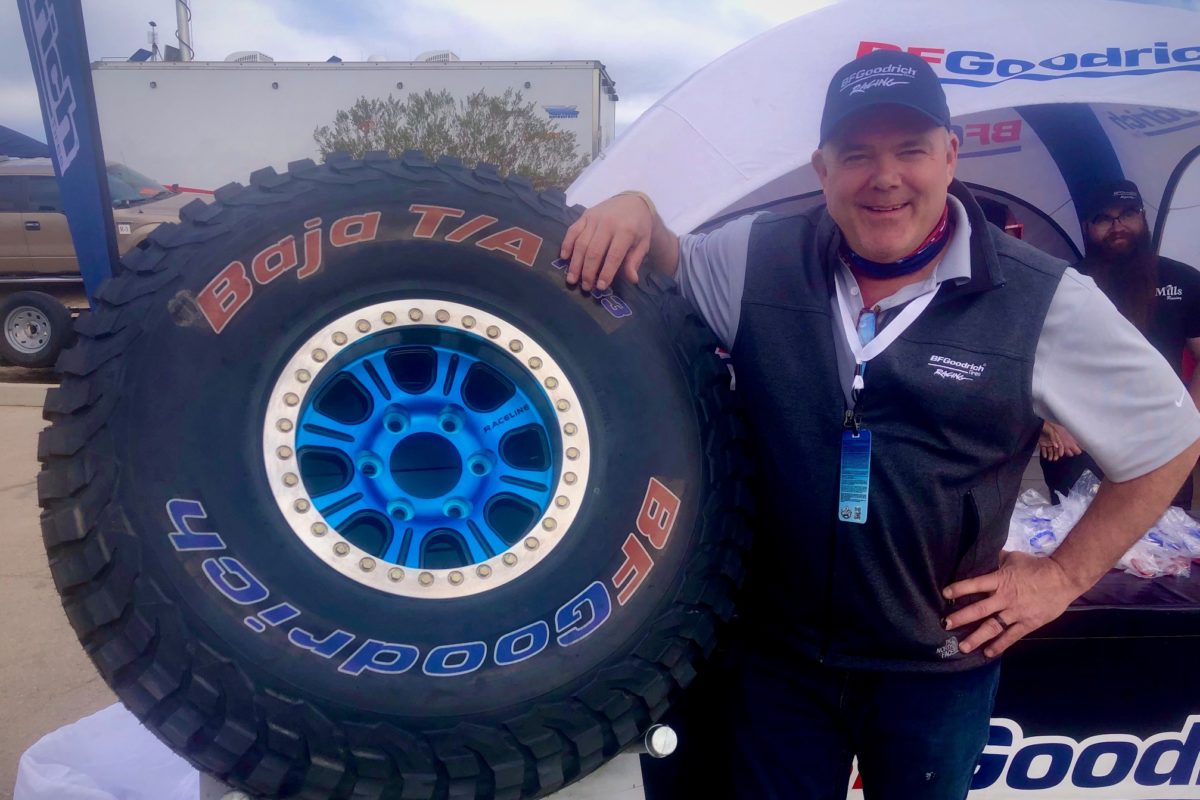