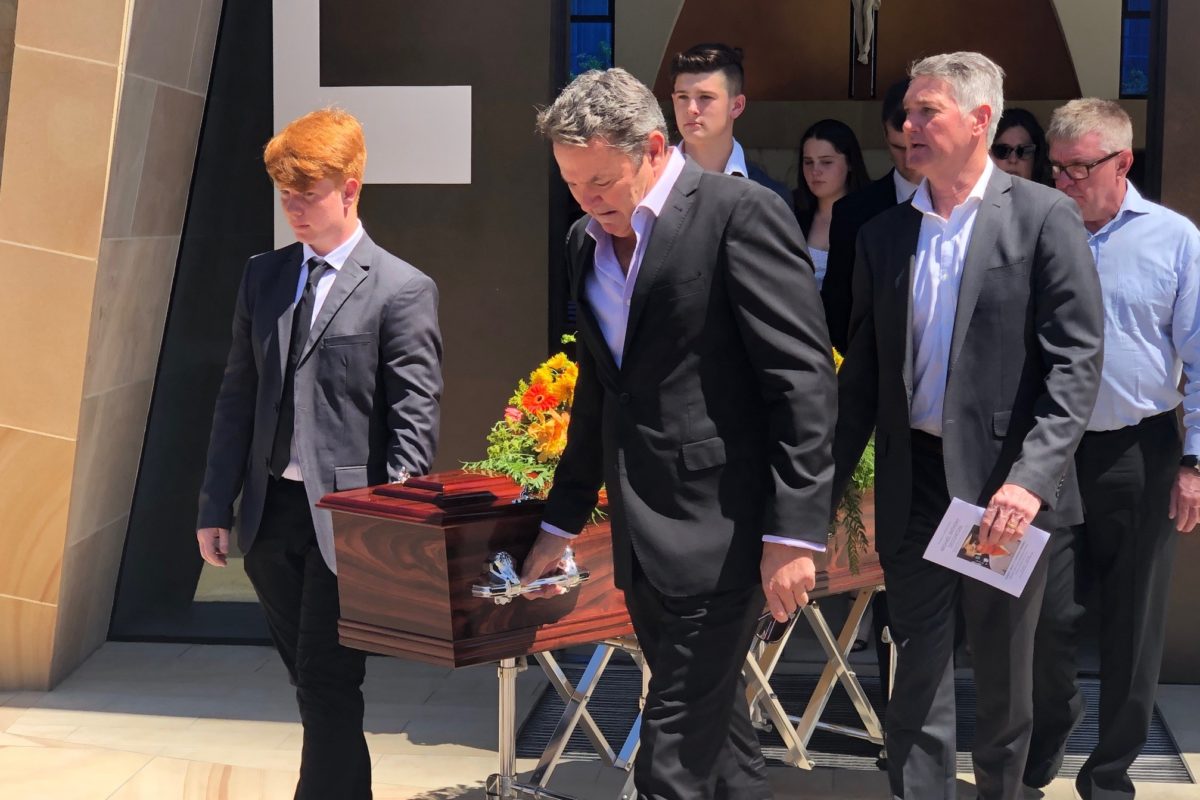 Members of the motorsport and automotive community came from all over Australia to say goodbye to industry character Michael Geoghegan in a funeral service on the Gold Coast today.

The catholic mass, the only one in South-East Queensland this weekend because of coronavirus restrictions, was held at the Stella Maris Catholic Church in Mermaid Beach, where Geoghegan was a regular parishioner.

A list of apologies was presented because of quarantine and travel restrictions, headed by Geoghegan’s good mate and former Supercars driver Owen Kelly.

Geoghegan was the son of five-time Australian touring car champion, Ian ‘Pete’ Geoghegan and nephew of Australia GT and Formula 2 champion, Leo, and passed away from natural causes last week.

Geoghegan, 54, raced Formula Ford racing in the early 1990s and remained a car salesman on the Gold Coast and Brisbane after moving to South-East Queensland almost 30 years ago.

Long-time mate and Australian motorsport legend Paul ‘The Dude’ Morris delivered an entertaining eulogy, which provided a terrific insight into the life and adventures of a true fan and character of the sport.

Other eulogies were presented by Paul Feeney, Scott Beasley, and Ash Beaton.

Speedcafe.com again extends its sympathies to Geoghegan’s mum, Nanette, sisters Rebecca and Sarah, and brother Chris and their families.

We publish the eulogy with permission of Morris and the family. 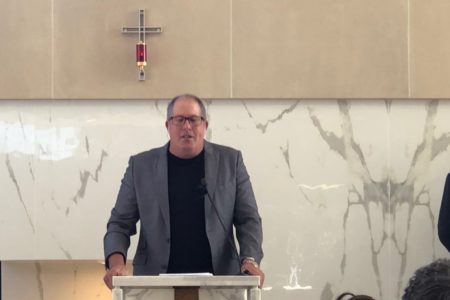 “I felt quite privileged and a little surprised when I was asked to do this eulogy for Michael Andretti – ah, sorry, Michael Geoghegan, our mate – ‘Gages’.

The phrase ‘one of a kind’ is overused a lot, but not when it comes to describing one of the true characters to have touched us.

I first met Michael at Amaroo Park Raceway at a Formula Ford race in 1989 and we hit it off straight away although little did I know the part we would play in each other’s lives.

Within 18 months ‘Gages’ rang me out of the blue and asked if he could have a bed for a couple of weeks while he retrieved a few debts and sold a few cars on the Gold Coast.

Ten years later, he was still there!

During that period and beyond, ‘Gages’ taught me one of the most important lessons of my life – how to have a good time – He was the King of it and didn’t mind sharing his knowledge.

We drank together, partied together, did some racing and in some respects, grew up together.

While his racing career eventually went by the wayside, his career as a hired shoe was far from over.

Not long after taking up semi-permanent residency at Dudes Acres he was to become an integral part of one of the Gold Coast’s great unsolved crimes.

You see, Dudes Acres’ mascot, Zack the Wonder Dog, had been nabbed while patrolling the local streets and was being held against his will in the local Gold Coast City Council pound.

Myself, Rocket Rodney, Ramo and Davey Mack hatched a plan to break him free and ‘Gages’ was nominated as our ‘getaway’ driver.

As it turned out, the way the gates were configured at the pound meant that not only Zack would be broken out that night, but all two hundred pound hounds.

With all hell breaking loose and sirens screaming, all five of us, and Zack the Wonder Dog arrived at the agreed position for the getaway car with the idea of escaping cleanly and getting back to the acres for a few well-earned coolies!

The unfortunate thing was that our driver had shit himself during all the commotion and moved a couple of kilometres down the road, leaving our group to break up and scatter before reconvening back at my house just before dawn some four hours later.

Gages’ next driving job came as the courtesy driver at the annual Iron Dude event, where he would shuttle guests from the front gate of the property to the house in our old Valiant SAFARI station wagon.

It was during these summer events that ‘Gages’ brought speedos back into fashion and as far as he was concerned they never went out.

‘Gages’ made no secret of the fact that he never had a large budgie to smuggle, but what he lacked in some areas he made up for in others.

One of our mate’s great attributes was his ability to take the piss out of someone without them even knowing.

He would sum someone up within a minute or two of meeting them and, if appropriate, would have christened them with a new nickname before the next beer was ordered.

Even someone tagged with the title of ‘Lizard Gobb’ because of the consistent licking of his lips in the opening minutes of their association just smiled back, completely unaware of his public humiliation.

‘Gages’ loved good people, but just as much he loved the sport of motor racing.

Probably the only thing he enjoyed more than motorsport was a good time and on so many occasions they just went hand in hand.

It would be nothing for me to be in the pit lane at an event and you would hear a familiar shoutout, “HEY DUDE”.

I would look up and there would be ‘Gages’ hanging out of a corporate box, wine in one hand, fag in the other and his Malrboro VIP pass around his neck.

He was still using the pass until weeks ago, despite him originally sourcing it at the Australian Grand Prix in 1991.

Ironically, it was also in 1991 where he turned into his alter ego of Michael Andretti.

Looking a little bit like the American ace, ‘Gages’ used it to his advantage with a willing and uneducated new crowd at the inaugural Gold Coast IndyCar race in Surfers Paradise.

He introduced himself or we would introduce him as ‘Michael Andretti’ everywhere we went and I don’t think any of us paid for a drink the entire weekend.

He even made the social pages of the Gold Coast Bulletin where he was pictured with a couple of birds hanging off him, with the caption “Michael Andretti ambers at a slower pace at Benson’s Nightclub”.

I don’t think it was long after that he had his own business cards printed declaring his new position as a photographer with Penthouse Black Label edition – As you could imagine, that got him more than a few drinks!

As many of you know, I am not a funeral or church type of guy, but ‘Gages’ was actually spiritual and was a regular attendee at church.

I would always question him whether he was turning up because of a few of the stylish old birds also in attendance or was he actually into the whole process?

Normally, he would just stare at me and wave me away.

Funnily enough, in these current uncertain times we are living, there is only one thing I know for sure – ‘Gages’ would not have let it bother him and maybe that’s a positive we could all take away from today.

While everyone here faces different levels of grief, we all walk away knowing that the bloke we have come to pay tribute to crammed more than one life into his short 54 years.

And we can be assured that somewhere he is enjoying a chilled glass of POIKA LOI.

‘Gages’ lived life like many go motor racing – it’s only cheating if you get caught!”