FEATURE: The impact of the digital age on motorsport photography

FEATURE: The impact of the digital age on motorsport photography Speedcafe.com’s award winning photographer, Dirk Klynsmith, explains how his world has changed in the transition from film to digital immediacy.

These days, one of the first things you might do when you wake up – after giving your partner the customary kiss – is reach for your smartphone to see the latest from this very publication, complete with illustrative imagery. The digital age allows this, programmed to go live at 6am. Long gone are the days when you would wait with bated breath for the newsagent to open at 9am and then peruse your fresh copy of one of the specialist weekly magazines and check out your favourite photographers’ work.

But what effect does this have on photographers? Well, I can tell you it’s not all balls and skittles. Speedcafe.com can now have their images within minutes of the photograph having been taken, including the chequered flag shot even before the car has reached parc ferme (See example on right).

It has not always been like that, of course. Back when I started shooting race cars in 1989, it was film. My equipment included a Canon Eos, a Canon 100-300 USM L, a Canon 24-70mm, and a flash. I did not even have a desktop computer – laptops did not exist yet – and I used Fuji 400 colour negative film. Eventually I progressed to a Canon 300mm 2.8 and ditched the zoom lens.

In those days, we would shoot the event not knowing our results. We did not know if our pans were off, if we got the best of the flame out, or just how high the car got after it bounced off the kerbs. I certainly did not know if my early arty experiments worked. We had to wait. We would take 10 to 15 rolls to the lab and they would process and run off a set of prints. Deadlines for magazines were not until Thursday so we had time to go through the results and editing was simply a matter of ‘Keep that one; bin that one.’ Editing could be done on Monday night or Tuesday. Once captions were written on the back, it was down to the post office to mail to the editor. Easy days. Drivers, fans and clients would receive their prints in the post.

When I started shooting for Sutton Images, an English photo agency, there was a bit more urgency and I had to shoot using Transparency film (slide and Fuji Velvia and Provia). The requirement was to fly home Sunday nights and drop the film into a night box at the lab, collect the developed film by lunchtime, select, and caption, then book DHL courier for an international freight as Suttons needed the images by Tuesday. Still pretty easy.

Things started to change in 1994. I bought a desktop computer; it probably had about 5MB of RAM, it was chunky, and definitely not that portable. I did a yearbook on the Australian Superkart Championship and that sent me on my way down the road to what we have now. 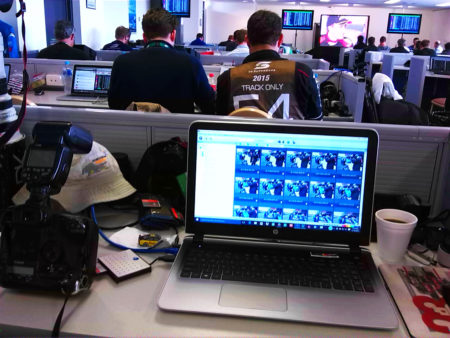 The catalyst for change was three-fold. Firstly, laptops started becoming more cost-effective (albeit still very expensive); secondly, film scanners could be purchased that we could connect to the laptops via a scuzzy card; and finally, Adobe Photoshop came along to allow us to scan and edit.

Initially, a couple of us would find a lab close to the race track, get the films developed, and scan at the track or overnight. Then I purchased a developing kit and colleague Mark Horsburgh and myself would develop selected rolls of film at the track, scan and send. Connection was via landline and connected directly to computer. I can still hear the screeching sounds as the computers talked to each other; no email back then.

The end was nigh! Suddenly, magazines could bring their deadlines forward (specialist motorsport websites were still a couple of years away). Now, it was Tuesday so they could go to print Wednesday night. Soon enough, we had to scan and send Monday night. Suttons soon became digital only. Gone were the days going out and having a big night out. Soon we had email.

In 2000 came the revolution. Canon, in cahoots with Kodak, developed a digital camera. It was astounding; big, clumsy, slow, and the file size was 5.7MB. I bought my first digital camera in 2001; the last of the dinosaurs, holding up the film industry for as long as I could. The Canon D1 was expensive. My camera cost me $19,000. No lenses, no spare battery, three frames per second, and file that was only 5MB. The card cost a bomb and could only hold a small amount of images. No matter, the digital age had begun. Online clients soon followed and magazines wanted images in the bank for Monday deadlines, which then became Monday morning deadlines.

Today, I have three cameras and two have modems connected for sending images to my phone or a server via an FTP site. Each camera is roughly $7000, capable of 12-16 frames per second, file size is 54MB, and can be enlarged to a two-metre wide print. The laptop boasts 8GB of RAM and 500GB hard drive; scuzzy cards went the same way as the aforementioned dinosaurs and we now plug our ‘film’ directly into the computer.

Teams, drivers, categories, Speedcafe.com, et al now all expect and receive their images within minutes of the session ending. Fans can receive on their phones, laptops and tablets via Facebook, Instagram and dedicated websites, almost instant colourful imagery that they once had to wait a week for. Photographers now work, often, until midnight each day to ensure their clients have a full gambit of imagery for the next day.

Do I enjoy it? Mostly, but the next punter who reckons my life must be easier in the digital age may not get to give their partner a sweet peck on the cheek! 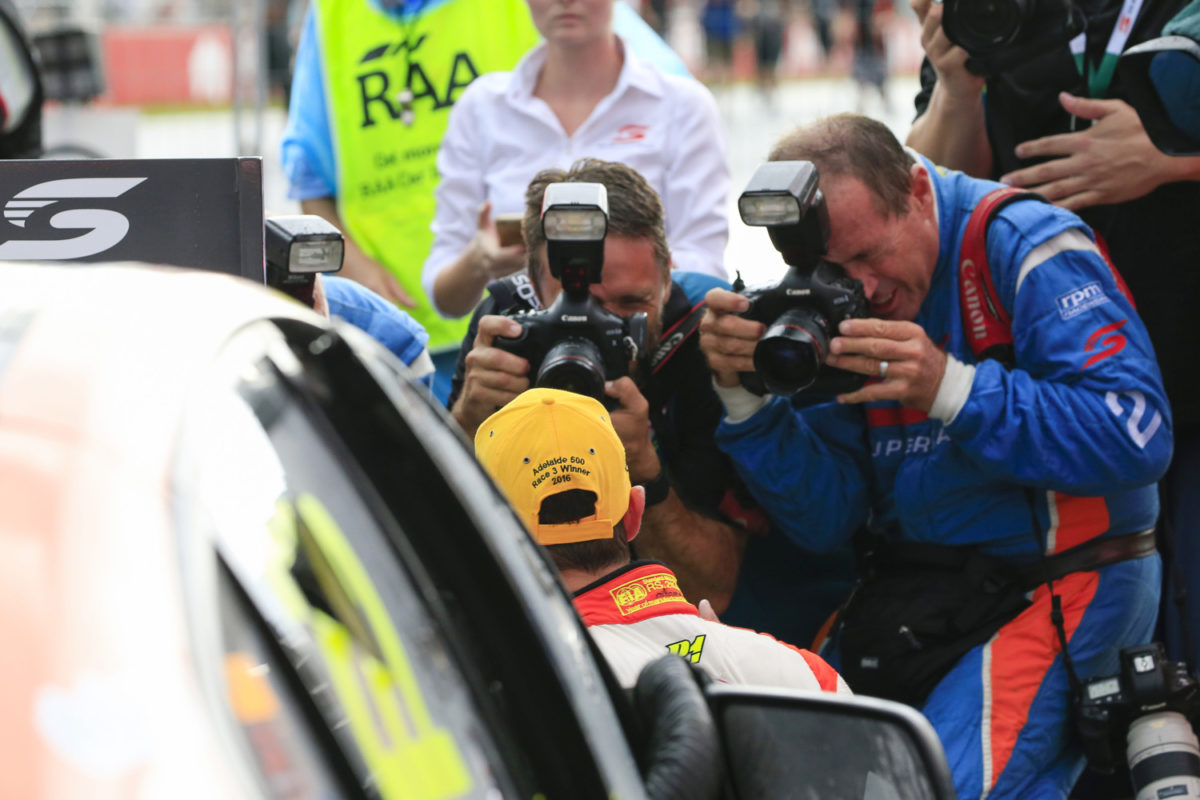