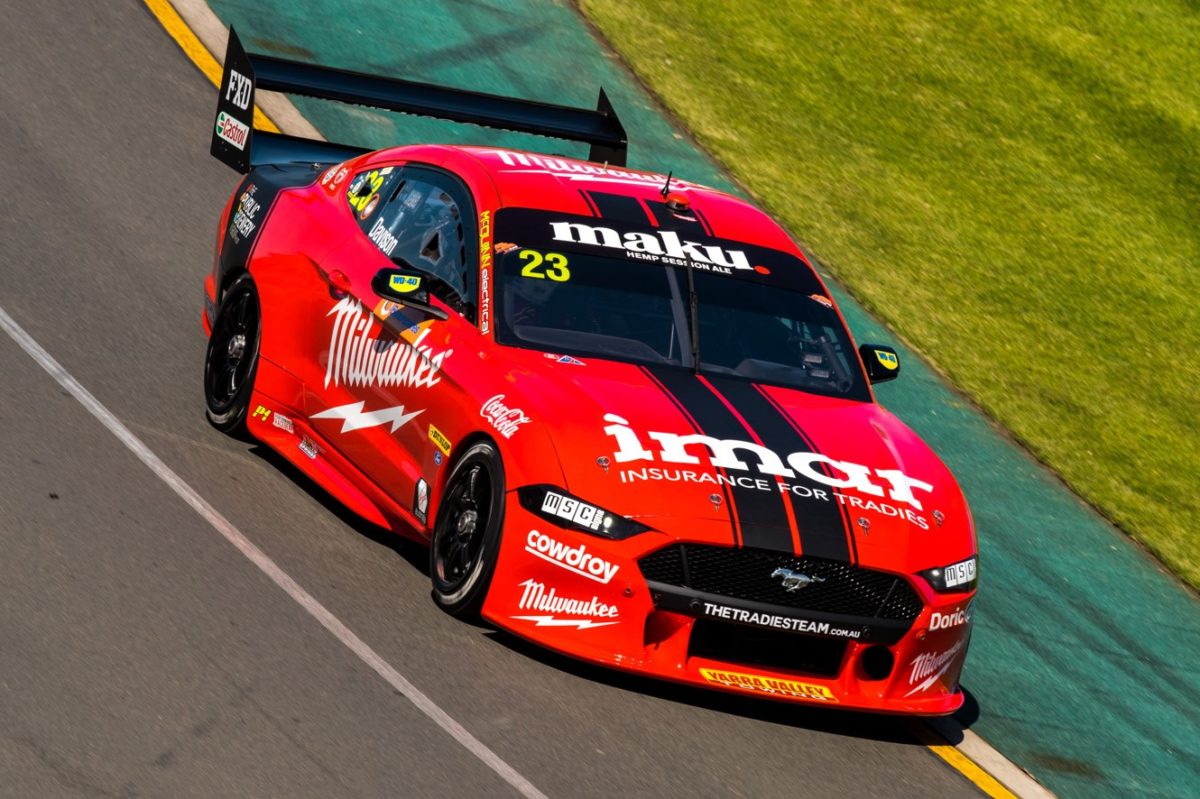 Will Davison says he and his team-mates’ strong Supercars performances at the start of 2020 are thanks to Tickford Racing, not just the Ford Mustang.

Running out of the Tickford Racing stable under the satellite banner 23Red Racing, Davison has quickly made himself a threat to the top contenders in 2020.

Davison was fastest at The Bend Motorsport Park in pre-season testing and was quick again at the season-opening Adelaide 500.

The Virgin Australia Supercars Championship veteran has shared the limelight with team-mate Cameron Waters to date. After Adelaide, the pair sit equal on 231 points in fourth overall.

Lee Holdsworth isn’t far behind the leading pair either in seventh overall. Jack Le Brocq lies further afield in 15th after his first two races with the team.

Davison showed promising pace in qualifying at the first round and carried that form through to the Melbourne 400. However, he was denied two top five starts at the Formula 1 Rolex Australian Grand Prix after it was cancelled due to the ongoing coronavirus pandemic.

In between the 2019 and ‘20 seasons, parity changes to the cars have been made to level the playing field, including aerodynamic reductions, a horsepower drop, and the addition of a controlled Supashock shock.

The team finds themselves in an even stronger position than this time last year, something Davison attributes to the team’s cohesion and development work.

“Tickford is a great team, they always have been,” he said.

“Everyone just said it was the Mustang last year and I think people are finding out we’re a great operation. We’ve always been top three.

“With Falcons they were champions. They’ve always been in the mix. Last year was just a lot of bullshit speak. We just kept doing our thing.

“Our engineers, our drivers, working together and now that there have been some changes to the category and the cars.

“It’s important that with us all working together that’s what you need when there are changes. There’s no silver bullet in this category. Anyone who is fast knows that.

“We had a good year last year as a team, we’ve been developing and maybe we’re just taking another step more. We won’t stop searching for that last step to the top.”

Tickford Racing team principal Tim Edwards echoed Davison’s sentiment, adding he’s pleased with their speed given the technical changes that have been made recently to the field.

“I think everyone is quite positive,” Edwards said of the team’s progression.

“We said we want to start the season where we left off last year and that’s what we’ve done. That’s encouraging because there’s been a lot of change over the break.

“We’ve got different downforce, lower horsepower, different dampers. Effectively the three things that make these things go fast being suspension, aero and engine, we’ve had changes to all three.

“To be able to come out as a team and pretty much carry on where we left off is really encouraging. It’s positive. We’ve just got to keep that going for the rest of the season.

Coming into the 2020 season, Davison has found stability too with the same car and same engineer. He said his second season with engineer Brendan Hogan has him riding a wave of confidence.

“I know I’ve got a good crew and a really good group,” said Davison.

“We’re working really well together. It’s the first time in six years that I’ve had the same engineer for a second year straight.

“With these changes, we’re really starting to click and gel. I’ve just got a familiar car that I’m starting to feel comfortable with.

“We want more, bit by bit we’re getting stronger.”

Davison has shown glimpses of chart-topping speed but ultimately hasn’t been able to convert his strong qualifying performances into a podium.

The seasoned driver said he wants to take the next step and score his first pole position during the 2020 season.

It’s been over five years since Davison last scored a pole position in Supercars, however, he has managed to score podium finishes as recently as 2019.

“Obviously now I want a little bit more,” he said.

“The next step is to make sure we have really good race pace. We were probably quicker over one lap than the race in Adelaide.

“We want to get greedy and find that tenth to the front row. We’ve been able to methodically tune our way through.

“We’re right in the hunt for pole and that’s a really nice feeling. We’re carrying over some good form at the moment, I’m really loving that.”

The Virgin Australia Supercars Championship is currently slated to reconvene at Symmons Plains for the Tyrepower Tasmania Super400 from April 3-5.