OPINION: The day the Mexicans had a standoff

OPINION: The day the Mexicans had a standoff 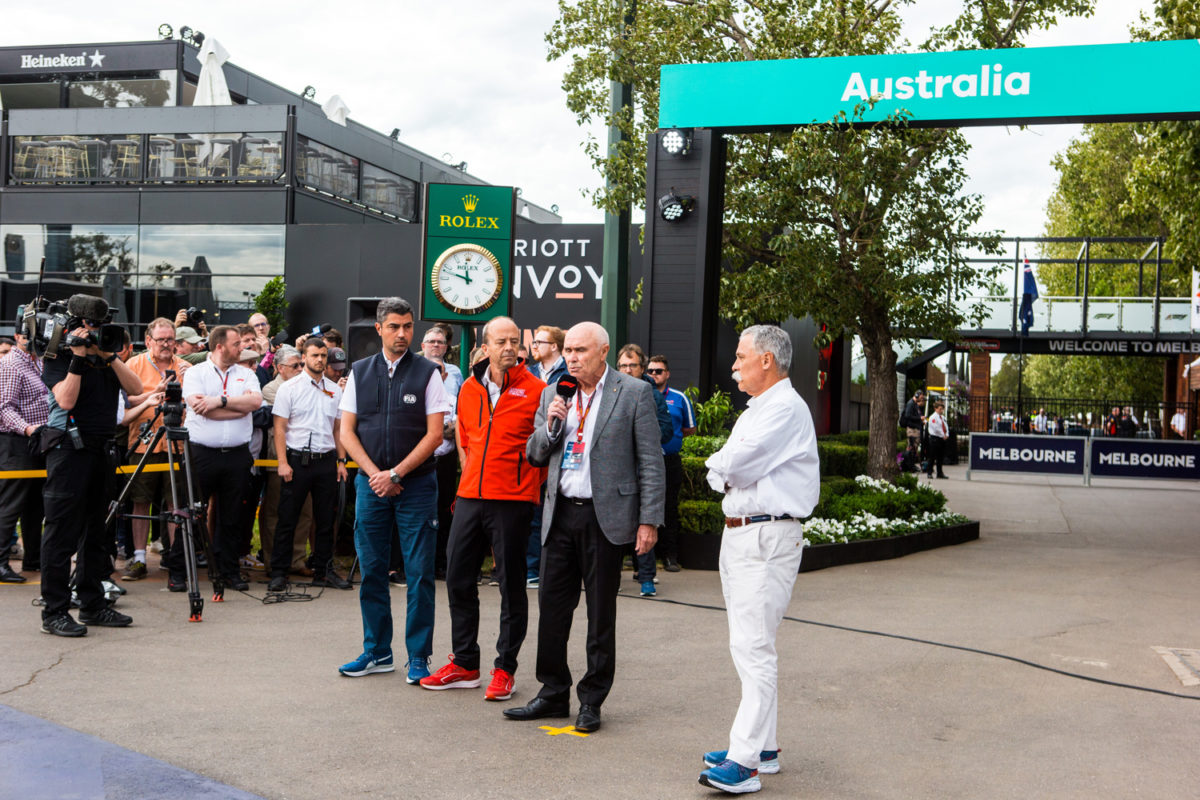 Speedcafe.com founder and owner, Brett ‘Crusher’ Murray, takes an interesting look at the drama of Australian Grand Prix. Murray was part of the management team of the Gold Coast IndyCar event for 19 years and helped save it from extinction after an A1GP no-show in 2009.

I grew up in Albury on the New South Wales-Victorian border, where everyone south of the Murray River was referred to as a ‘Mexican’.

How ironic that one of the greatest Mexican standoffs of our time happened in the Victorian capital of Melbourne on Friday?

Wikipedia – A Mexican standoff is a confrontation in which no strategy exists that allows any party to achieve victory. Any party initiating aggression might trigger their own demise. At the same time, the parties are unable to extricate themselves from the situation without suffering a loss.

With several weeks of ducking and weaving and singing Kumbaya, we were left with the Australian Grand Prix Corporation, the FIA, the Victorian Government and Formula 1 heavies standing in a Mexican standoff, guns pointed towards each other, just a couple of hours before a scheduled season-opening F1 practice session.

In one final sequence of events we had the Chairman of the Australian Grand Prix Corporation reportedly telling everyone that the event was going ahead and minutes later the Victorian Premier, Daniel Andrews, who had been extremely low-key during the whole debacle, saying that the event would progress, but without any fans in the stands.

Fans continued to queue at the gates well after the scheduled time for the track to officially open – many of them international visitors having burned up long-term savings to enjoy a once in a lifetime experience.

In the meantime, speculation continued that a number of F1 drivers had already flown out of town and that the F1 teams had already made their decision not to take part in the event after a closed-door meeting that ended somewhere around 3am.

Back at the corral, the guns remained cocked and loaded while other major stakeholders in the event, such as the Supercars organisation, which may have been part of a possible solution, were kept in the dark.

Funnily enough, it was Andrews’ official call that suggested the event would progress with empty stands which seemed to force the hand of everyone else wearing a sombrero.

The reality was the game was up some seven or eight hours earlier and Andrews called the bluff, intentionally or unintentionally.

After all, it would have been difficult for F1 to agree to a race start with several of their stars already at 40,000 feet, halfway to Dubai.

It was possibly the most extraordinary day I have experienced in my 36-year media career and one which I explained to my editorial and management team might only come along once in their lifetime.

I could not be more proud of the effort of our Speedcafe.com team which worked around the clock and played an absolutely straight news bat informing the fans and industry minute by minute as general news media and social hacks continued to spew misinformation.

Our team’s effort coming despite a disgraceful communication programme from all the major stakeholders – all totally bound by a ‘who blinks first loses’ proposition.

This whole scenario will be used in university PR courses for years to come as a shining example of how not to handle crisis management.

There was a similar Mexican standoff position at the Gold Coast event in 2009 when it was clear that the A1GP cars were never coming to the race.

Again we were left with event and series’ management in a standoff position and it wasn’t until five days before a scheduled on-track start that an admission was made that the open-wheel category would not be showing up.

Fortunately, Supercars were part of a Plan B bailout solution pulled together around the clock and behind closed doors the prior week by myself, then-Supercars Chairman Tony Cochrane, and a few others.

Originally it was planned to have 44-lap 200km Supercar races on both Saturday and Sunday, but this was reconfigured to two 34-lap 150km races on both days.

This was confirmed along with the addition of a unique Pirtek Legends concept which saw some of Australia’s most famous touring cars reunited with their drivers from demonstration races on each of the four days of the event.

The format changed for the Gold Coast 600 the following year when a two-driver 300km race was run on both Saturday and Sunday with the addition of compulsory international co-drivers.

The Plan B saved the event and possibly the government at the time and it continues on some 11 years later.

Friday’s AGP situation was obviously significantly different given the Coronavirus and a set of dynamics that were changing by the minute, including apparent medical advice and major public influences like the NBA suspending its season in the United States.

Interestingly, there was very little public correspondence from the Victorian Chief Health Officer amongst all this. A question remains as to what input they had into the final position, when the advice came, was it listened to and why wasn’t it made public or at least shared with other stakeholders.

While it was not officially made public at the time, Speedcafe.com had also confirmed earlier in the morning that the third round of the F1 championship in Vietnam would not be going ahead, which all the gun holders were surely aware of, and which obviously created more pressure.

I wonder if the dramatic fallout we are going to experience for sometime could have been softened if the AGP office had taken up a Supercars-inspired bailout option when an attempt was made to present it more than two weeks earlier.

Surely, it would have made sense to even have it in the top draw as an option.

A reorganisation of the on-track schedule, even without fans in the stands, would have allowed a lot of contractual obligations to be met and for massive national TV holes to be filled with content.

Provisions could have been made for support category teams regarding reduction of risk to the virus, although guarantees of total isolation would have been impossible; ask anyone (including myself) who managed to pick up the gastric bug that went through the paddock at the 2019 event.

At the end of the day it was all about who was going to pay – and we still have not been told that, although it would seem that F1 were the ones that blinked.

In the meantime, the losers, in no particular order, include the fans, sponsors, the teams at all levels, caterers, TV partners, advertisers, marshals, volunteers, casual staff, small business owners, independent media operators, freelancers, merchandisers, logistics and product suppliers, government (the people), the accommodation houses, airlines, restaurants and bars, the AGPC, F1, FIA etc, etc, etc – and finally the reputations of everyone who screwed it up.

One thing is for sure, if nothing has been learned from this then we all have seriously lost more than we think.

A massive reset is about to be forced in our sport from the top down, especially in over-inflated, cost-ravaged categories where the ‘have nots’ might just run out of breath and flick a switch on a total re-think about how everyone moves forward.

We all just need to take a big breath and know that it will all eventually be okay; how much damage has been done and how long the recovery takes is yet to be determined.

Although, the reputations of a few will be one of the things that will not recover and, in most cases, rightly so.