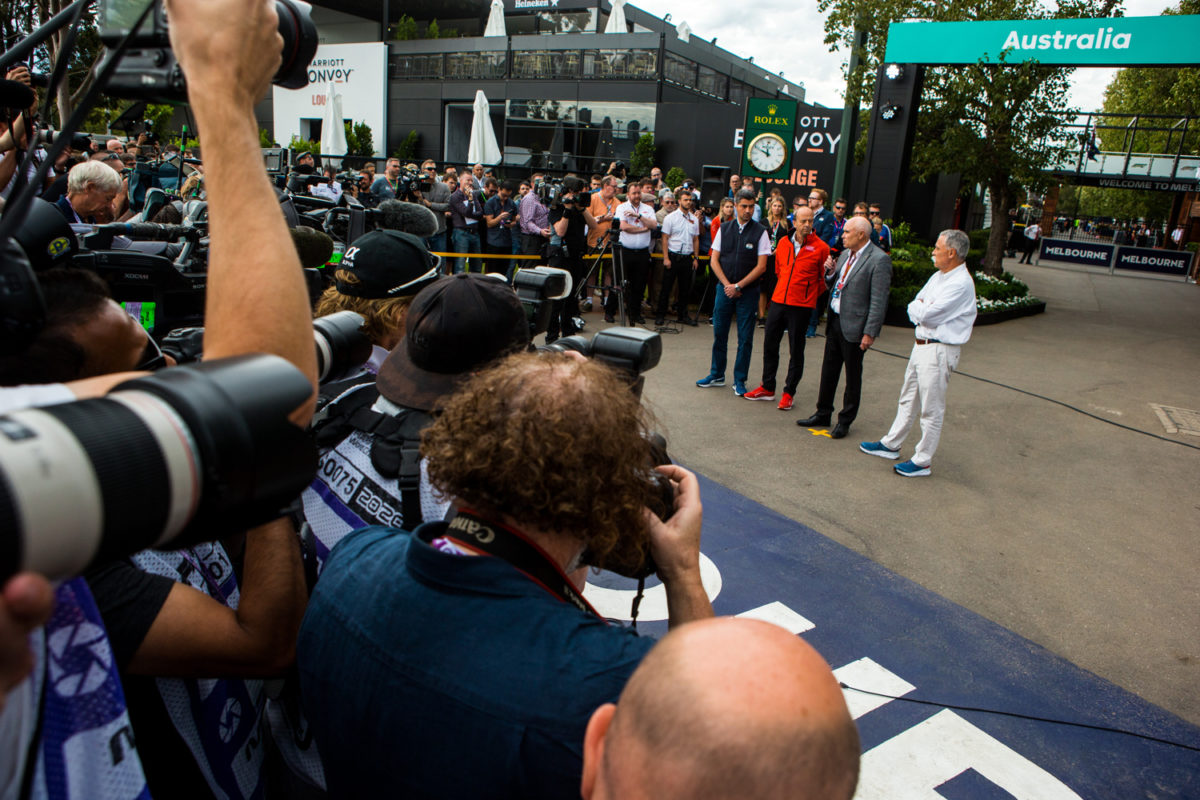 Questions regarding the decision to cancel the Formula 1 Rolex Australian Grand Prix remain unanswered following a press conference with event officials in Melbourne on Friday.

The event was eventually cancelled on Friday morning, with a press conference just before midday shedding little additional light on the situation.

The cancellation itself was made via a clumsy series of statements on Friday morning, firstly stating the event was going ahead as scheduled, then announcing Formula 1 action was cancelled.

However, exactly who made the call is less clear, with the AGPC’s cancellation statement appearing to single out Formula 1.

Furthermore, no specific reference to support categories was ever made from the AGPC, only the ambiguous reference to the ‘Formula 1 Australian Grand Prix’.

Speedcafe.com understands Supercars was informed its event would not go ahead prior to the AGPC statement being released.

When supports were not clearly covered by the AGPC, Supercars then felt the need to clarify the point with its own statement, by which time Supercars teams had already begun to leak the news on social media.

While the AGPC’s statement implied that the decision to cancel F1 track action came from Formula 1 itself, it was still unclear as to who ultimately triggered the event’s cancellation – Formula 1, the Australian Grand Prix Corporation, the FIA, or the Victorian Chief Health Officer – after Andrew Westacott (AGPC CEO), Paul Little (AGPC Chairman), and Michael Masi (FIA Formula 1 Race Director) faced the press alongside Chase Carey (F1 CEO and Chairman).

“The Victorian Government is the partner, if not the sponsor, of the Australian Grand Prix Corporation and as an entity of the Victorian Government, we have worked extremely closely with the Department of Health and Human Services to take advice throughout the many weeks leading up to this event in relation to the spread of the COVID-19 virus,” explained Westacott.

“We have taken guidance every step of the way from that committee and their input has been crucial, and we had additional advice this morning (Friday) that indicated that the event would be cancelled and that information has been had in parallel.

“It’s important to note that Victoria, on Sunday last weekend, five days ago, hosted a massive event, the World T20 women’s final at the MCG which hosted 86,000.

“So, this is a fluid situation that emerges and changes on a day-to-day basis, and I say thank you very much to Formula 1, the FIA and the Department of Health and Human Services and the Chief Health Officer for the work they’ve done in making sure that we’ve got up-to-date information all the way through.”

Asked about whether the Victorian taxpayer would be left to pick up the bill, Westacott added: “A cancellation of this nature has a lot of consequences and some of those are contractual and financial.

“We will work those through with the commercial rights holders in the days and weeks following this announcement and we will be making sure that appropriate contractual measures are looked after in that manner.

“The point I would make to the fans is that we’re going to work through with the fans on refunds applicable to their ticketing arrangements.

“Not only is it the fans but there’s an element of sadness and disappointment that I have for the 600 suppliers, the 12,000 staff that work the event on a weekend, the 180 staff that we have, the family that is Formula 1.

“Sport is a wonderful thing that brings us all together but also in these changing times around the world, we need to be very mindful of the input of the health authorities.”

Westacott refuted the suggestion that there was a danger to persons attending the event, a position which contradicts the decision to cancel the event.

“There’s no suggestion of that whatsoever,” Westacott said when asked if anyone at the circuit had been put in danger as a result of their presence at the Albert Park Grand Prix Circuit.

“The advice and input from the Chief Health Officer of the Victorian Government takes into account not only the test results from the eight (team members) that were submitted and the one positive but it also takes into account what’s happening in the localised society and environs of Melbourne.

“He takes input from his colleagues interstate, they are networked from an overseas perspective and they feed up to a national committee.

“It is a broad base set of inputs and when they made the decision that they did, it was based on all the inputs and the medical evidence that they have and which we’ve taken all along, and at this point in time it was clearly the right decision to make and we are where we are.”

It should also be noted that another 14 members of McLaren’s workforce were placed into isolation on the eve of the grand prix, a point made public at almost the same time as the press conference concluded.

It’s also a point referred to by Ross Brawn in a video on the official Formula 1 website which implied that he at least knew of the additional staff impacted, and it was that which ultimately ruled McLaren out.

“Having one case with 14 people having to go into isolation, that just effectively knocked that team out of operation,” Brawn said in the video, posted at approximately 18:30 local time/AEDT on Friday evening.

It’s a position which also doesn’t tally with Westacott’s statements as, if there was no danger, there would be no need for the additional staff to go into isolation, ergo nor McLaren to withdraw from the event.

Furthermore, while it’s claimed the decision was ultimately taken with the best interest of fans, staff, teams, drivers, et al in mind, that assertion fails to account for the crowded masses queued at the gates on Friday morning awaiting an update on whether they’d be allowed in.

That was despite Victorian Premier Daniel Andrews announcing the event would be fan-free, if it went ahead, at approximately 09:00.

Equally concerning was Carey’s evasive and dismissive responses when asked about the prospect of the Bahrain and Vietnam races going ahead.

Red Bull boss Christian Horner admitted his team was heading back to the United Kingdom and not Bahrain, while a statement from McLaren confirmed it too was sending staff back to the UK.

Speedcafe.com wrote on Friday the Vietnam Grand Prix would be cancelled, well ahead of confirmation that both the Bahrain and Vietnam events had been postponed.

But despite the looming threat and predictable questioning, Carey failed to take the initiative to lead the narrative surrounding the events, offering instead meaningless and flippant responses.

“At this point, our focus really is dealing with the issues this weekend,” said Carey when specifically asked about forthcoming races.

“I just came in from Vietnam so we are in discussion with partners on the upcoming races but I think at this point what we really want to do is make sure we deal with the issues here, deal with them properly but in the coming days clearly we will be addressing the events yet to come.

“It’s a pretty difficult situation to really predict. Everybody uses the word ‘fluid’, it is obviously a fluid situation.

When challenged specifically about Bahrain, Carey was somewhat more forthcoming but again failed to offer anything concrete in his response.

“We have to deal with it (Bahrain) imminently but right now, our focus is dealing with the issues here in Australia.

“But in the very short term, we need to be addressing the immediately upcoming events.

“We do expect to address that, with our partners.

“We deal with a large ecosystem here and we want to make sure everyone has an opportunity to express views and thoughts.

“That’s underway and we expect to be clear what our plans are there shortly but right now, our focus is on dealing with the issues here.”

Pressed on where the media should book flights to for the next event, Carey flippantly responded: “You tell me”.

Approximately 12 hours later, at 23:37 AEDT, a statement confirming the Bahrain and Vietnam events would be postponed was released.

Throughout Friday, and in the days leading up to the final announcement, both Formula 1 and the Australian Grand Prix Corporation have come under heavy criticism for their handling of the situation arising from the global pandemic.

That included a distinct lack of information. Speedcafe.com reached out to representatives of the Australian Grand Prix Corporation, including Andrew Westacott, on multiple occasions. None of our calls, text messages, or emails have been responded to since March 10.