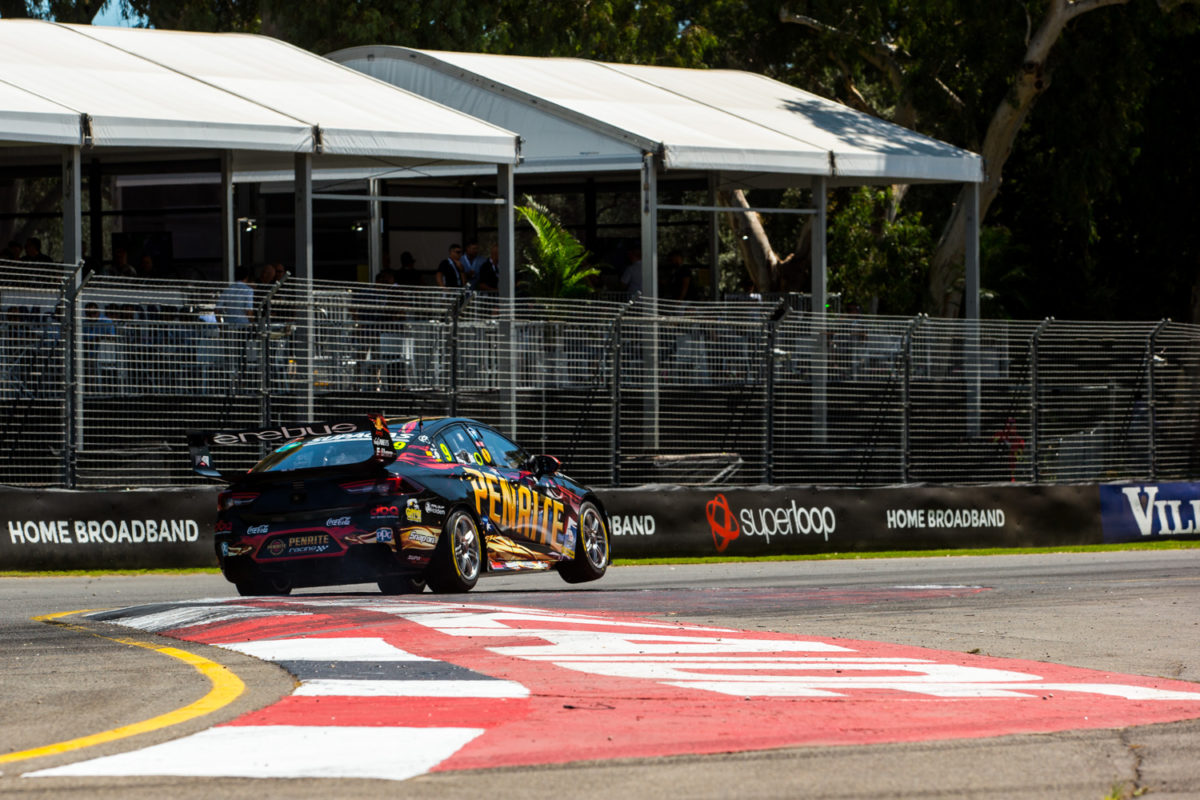 David Reynolds drives over the kerbs in Adelaide

Barry Ryan, CEO at pre-existing SupaShock customer Penrite Racing, has dismissed concerns around the durability of Supercars’ new control damper which is supplied by the South Australian company.

The control Pedders/SupaShock damper made its racing debut at last month’s Superloop Adelaide 500, where a car belonging to Triple Eight Race Engineering customer Team 18, and another entered by Triple Eight itself, suffered lower control arm failures.

The latter, which put paid to hopes of a spectacular podium salvage for Shane van Gisbergen in Race 2, occurred in conjunction with a front anti-roll bar failure in the #97 ZB Commodore.

Erebus Motorsport has not encountered any issues since it switched to SupaShock dampers in mid-2016, according to Ryan, who pointed that the 2020 specification had actually been strengthened relative to the existing SupaShock Supercars product.

“If anything, the old shocker we ran was technically weaker, even though we never had any problem,” Ryan told Speedcafe.com.

“Some teams had concerns that the shaft was only 14mm, so they went to a 15mm shaft to appease that, but we’ve never had an issue.

“Reading some of those comments, it’s just uneducated opinions not based on facts, because if their teams had their ducks lined up, and all their engineering 100 percent, they were never going to have an issue; we’ve never had an issue.

“(Even at) the Gold Coast, (and) back to Homebush – that was really hard on dampers – we’ve never had an issue that couldn’t be explained, as in a crash or something else untoward.

“(SupaShock) have tried to make it a bit nicer and stronger and just made everything so it can last, not so much around being light.

“Performance-wise it just didn’t matter, because everyone’s got the same things. They didn’t need to save weight like an engineer would in the race team.

“They built something that’s going to last for a long, long time. They’ve done an awesome job, really.”

One theory concerning the Triple Eight cars which suffered steering arm failures was that their springs became coil bound, a problem which might have arisen due to excess suspension travel for the set-up(s) in question.

According to Ryan, SupaShock, with which Erebus maintains a commercial relationship, has provided advice regarding spring configuration since the Adelaide event.

“Since Adelaide, SupaShock have put some more documents out, basically advising people to be very careful with their springs and make sure they have enough travel so they don’t coil bind,” he explained.

“They’ve definitely been recognised as the issue. It’s basic engineering, really; you don’t want to coil bind springs because you break stuff.”

The Clayton squad’s co-team principal, Mat Nilsson, told Speedcafe.com that WAU had experienced, “no significant change in installation or how it affects our set-up on all that kind of stuff.

“(We’re) Just trying to understand what we’ve got and started to work with it. We’ve not had any problems at all.”

He also confirmed that wear in Adelaide, a circuit known to be tough on suspension, was in line with expectations.

“I mean, it’s a street circuit, it works them hard, but we’ve come out of it in a reasonable position,” said Nilsson.

Ryan’s comments were backed up by Supercars’ Head of Motorsport, Adrian Burgess, who said that the issues encountered in Adelaide related to a particular set-up philosophy which has now been addressed.

“This damper has been running in the series for four, five, six seasons already, so it was nothing really new to us, so we didn’t have concerns that some people have had,” Burgess told Speedcafe.com.

“In fact, from when we ran the damper at the end of last season, we had increased a couple of dimensions of the damper – shaft size, for example; the width is greater than last year – only to make it stronger.

“We didn’t have any concerns with the damper physically breaking, which it didn’t, so the damper for us performed as we expected it to perform.

“The shock is one part of a myriad of components that are all interlinked, so people will go about it in different ways, they’re entitled to do that, the rulebook allows them to do that, so they weren’t doing anything wrong per se.

“It’s just that they were operating the damper at a slightly different area to other people, and they encountered an issue that they didn’t expect and we didn’t expect.

“It has been addressed, it was an easy thing to identify, and that’s what we’ve done between Adelaide and the AGP.”

Burgess added that the control dampers function in a manner similar to the suspension packages which most teams ran with last year.

“Supercars went through a process last year of dyno-ing everybody’s dampers and the curve that we came up with probably fitted 80 percent of the dampers that were out there, but there’s always a couple of outliers that were doing something different,” he explained.

“The majority of the teams are relatively happy because the damper was relatively similar to what they were doing previously.”