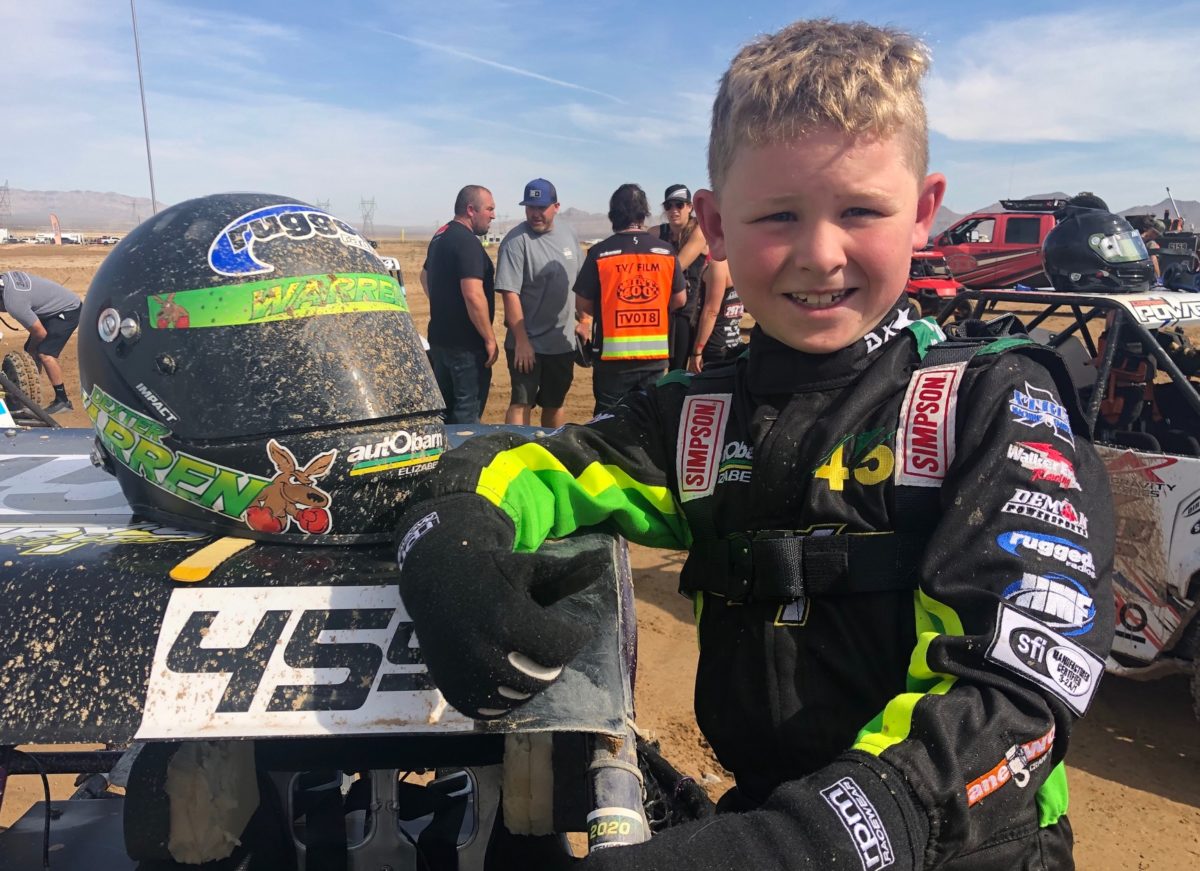 Dexter Warren could possibly be Australia’s youngest ever international motorsport competitor after proudly flying the national flag at the BF Goodrich Mint 400 in Las Vegas today.

The seven-year-old from Two Wells in South Australia started driving a go-kart at the age of two and was a regular dirt kart racer from the age of five.

With limited opportunities because of age restrictions in Australia, Warren’s father Rob looked for other early career options and discovered youth UTV racing in the US.

Warren had his first international start at the UTV World Championships last year at the age of six and returned to the US this week to compete in the first youth event at the Mint 400, which is one of the highest profile off-road events in the world.

This weekend Warren’s pit crew consisted of dad Rob, mum Mel and five-year-old sister Keirra with 11-year-old brother Cody electing to stay back in South Australia with his grandparents.

Radioed up, Rob had some simple last-minute instructions for his son as he prepared to race in a field that contained no less than six 11 year-olds.

“Just go out and have fun,” said Rob. Warren gave the traditional thumbs, provided a last-second systems check and a few seconds later was firing past a couple of his fellow Polaris RZR drivers and into the first corner.

Like most seven-year-olds, Warren had few words, but his smile said it all after the race was run and won.

“It was an OK start,” Warren told Speedcafe.com in the pits after the race.

“I was pretty sure I could beat a couple of guys on the inside to the first corner.

“It is just great fun. I just want to go fast.”

Warren drew starting spot seven for today’s 30-minute race and was running as high as third with just five minutes to go when he was hit from behind and flipped onto his side.

The youngster waved at officials to get him back on his wheels so he could take the chequered flag and be deemed a finisher.

The kid had a little extra motivation to get to the finish.

“Dad said that if I finished the race then he would take me to the NASCAR race in Phoenix on Sunday,” said Warren.

“I always want to finish, but I really wanted to go to the NASCARs.”

While many seven-year-olds struggle to focus on one thing for a couple of minutes, Warren’s effort was an impressive half-hour of concentration and physical effort on what was a tough course. Dexter Warren with his mum Mel and dad Rob

Owens turned up to an off-road race five years ago with a couple of the 170cc machines to put on an exhibition event and within a few weeks a dozen people had thrown up their hand to enter an official race.

Youth events at the Mint 400 attracted more than 40 entries.

“All he wants to do is race and the options were limited at home,” said Rob.

“We are building him a go-kart for next year, but this whole experience in the US has been great.

“Everyone is friendly and just want to help you out and really appreciate the fact that we have come all the way from Australia to be a part of the show.

“They have identified that if the senior ranks of the sport are to grow then they have to have junior ranks as a pathway.

“It is a relatively cheap way to go racing and for kids to really develop their race craft and have fun.”

Jury’s Liquid Waste is the naming rights partner and is owned by South Australian Super Sedan driver Kym Jury who runs his own car in identical colours.

The UTV World Championships are owned by brothers Matt and Joshua Martelli who also own and operate all facets of the Mint 400.

Warren will return for the world championships again in October before deciding what is the next step in his career.

The one rare thing he does have on his side? Time!