MotoGP open to racing without spectators due to coronavirus

MotoGP open to racing without spectators due to coronavirus 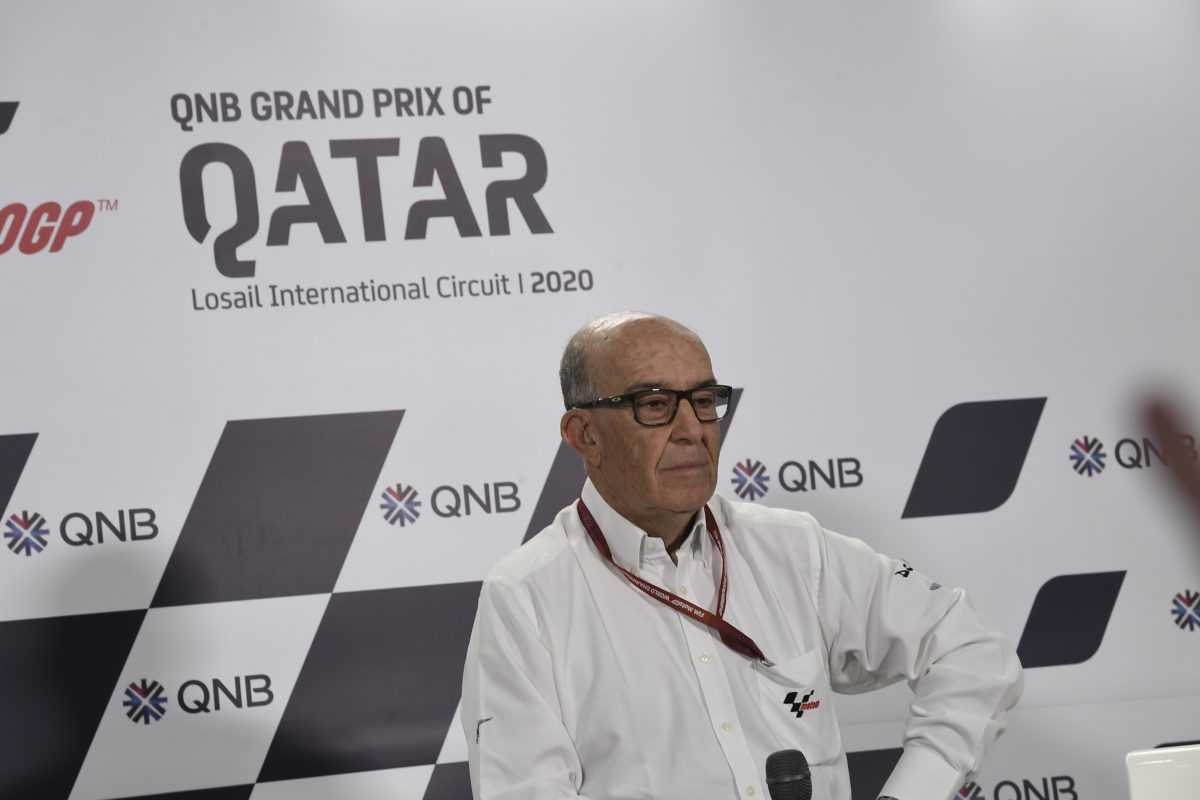 MotoGP would consider racing behind closed doors should the need arise due to the coronavirus outbreak.

Championship promoter Dorna has released a slightly revised calendar to account for the postponement of the Thailand round, although CEO Carmelo Ezpeleta has admitted that there are no guarantees against further changes.

Speaking in a specially convened press conference at this weekend’s Qatar Grand Prix, where only the junior classes are racing due to already being in the country for pre-season testing, Ezpeleta did not rule out the prospect of racing without spectators.

Already, spectators are not allowed into the paddock at the Losail International Circuit this weekend.

“Everything is possible,” he responded to a question about holding events behind closed doors.

“The most important thing for us to have a solution that covers everything.

“We say always that Dorna, with the agreement with FIM and IRTA (International Road racing Teams Association), is a company who makes races. And this is our obligation despite any other things.

“For us the most important, more than economy or whatever, is to make races.

“I can assure you with all the people of IRTA and all the MotoGP, Moto2 and Moto3 managers, we will try to do as many races as we can.

“I will not say now that I am optimistic but the only thing I can promise to you is we will work hard for whatever solution has happened, to make the races; the 19 remaining races.”

Ezpeleta also advised that at least 13 races would need to be held for the MotoGP season to formally count as a world championship.

The premier class is currently slated for a record-equalling 19 races after the loss of Qatar, and the MotoGP boss insists that the threshold of a world championship will be met even if coronavirus causes further disruptions.

“Contractually with the FIM, the minimum number for the World Championship is 13,” said Ezpeleta.

“Even in the worst case, with lots of cancellations, we have time.

“Maybe we will race in countries where it’s hot at Christmas but our duty is to make races and we’ll make races.

At present, the Circuit of the Americas will host the first round for the premier class, on April 3-5, although even that is uncertain.

Ezpeleta revealed that Dorna had also tried to move that race and bring one of the traditional European races forward, but such a change was not possible at such a late stage.

“The next race? the United States. We don’t know anything,” he stated.

“We are waiting to send all the material until the last moment.

“If the situation changes between now and that moment, we will make that decision.

“It’s true that we tried to move United States to the end of the year, changing for some of the Spanish races.

“It’s easy to say but to make those changes in the short time we have, to do these races at the end of March, it’s impossible for a circuit to organise a MotoGP race between now and the end of March.

“We announced today the change of the date of Thailand, thanks to the Aragon government to make the race a week early, and a week later we’ll have Thailand.”

“Today both are OK,” added Ezpeleta regarding the United States and the following round in Argentina.

“But I’m not sure what is happening in the future; what I’m saying is we have enough opportunity to save the problems.”

Argentina is still set down for April 17-19 at Termas de Río Hondo, before Spain’s Jerez plays host on May 1-3.