Geoghegan was the son of five-time Australian touring car champion, Ian ‘Pete’ Geoghegan and nephew of Australia GT and Formula 2 champion, Leo, and is believed to have passed away from natural causes on Tuesday morning.

Geoghegan, 54, dabbled in some Formula Ford racing in the early 1990s and remained a car salesman on the Gold Coast and Brisbane after moving to South- East Queensland almost 30 years ago.

A larger than life character, Geoghegan made friends in national and international motorsport through his personality and antics, including champion Australian driver Paul Morris.

“I met ‘Gages’ for the first time at Amaroo Park at a Formula Ford race in 1989 and we instantly hit it off,” Morris told Speedcafe.com.

“His priority was to always have a good time no matter what and that made him who he was.

“He taught me and so many of us how to enjoy ourselves and more importantly, how to get away with it.

“He could take the piss out of someone without them even knowing it.

“One of the best stories came at the first IndyCar race on the Gold Coast (1991) where he impersonated Michael Andretti all weekend and never paid for a drink.

“He even appeared in the Gold Coast Bulletin social pages with a couple of birds hanging off him at Benson’s Nightclub as ‘Michael Andretti’. 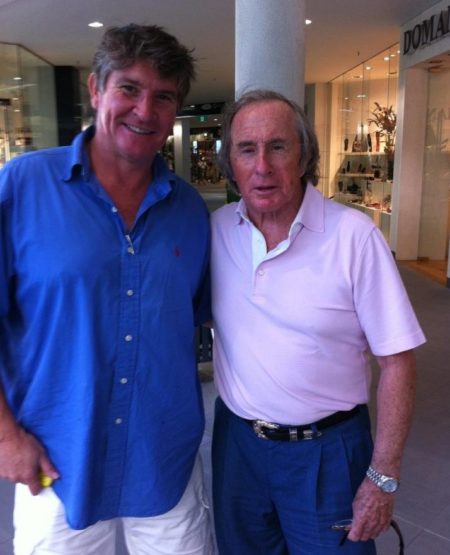 “He was one of a kind and we will miss him.”

“He loved the sport and the people in it and always knew what was going on, whether that was in Supercars, F1, MotoGP or local Formula Ford.

“He would ring you after each NASCAR race and have a 20-minute chat with you about everything that flushed out in the race.

“He also loved a good time and while he sadly went way too early, he certainly jammed a lot in.”

“‘Gages’ was one of the true characters I have had the pleasure of knowing in this business,” said Murray.

“He was a massive fan and supporter of Speedcafe.com and was always up for a chat about anything that was going on.

“He would always manage to con his way into a corporate box somewhere, most of the time using a Marlboro VIP pass he still had from a grand prix in the early ‘90s.”

Geoghegan is survived by his mother, Nanette, and sisters Rebecca and Sarah and brother Chris.

Speedcafe.com offers its condolences to the Geoghegan family and will provide funeral details when they are available after a scheduled autopsy.

UPDATE: The funeral of Australian motorsport character Michael Geoghegan will be held at 1100, Saturday, March 21.

Members from all areas of the motorsport community are expected to attend the service at Stella Maris Catholic Church at 268 Hedges Ave, Mermaid Beach on the Gold Coast.