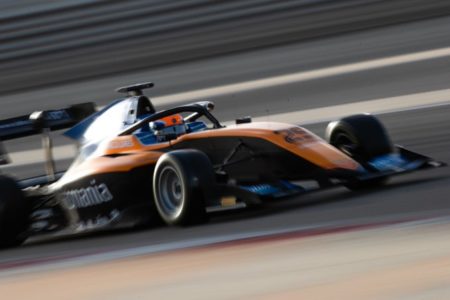 Alexander Peroni has set the fastest lap as pre-season testing for the FIA Formula 3 Championship wrapped up at the Bahrain International Circuit.

Peroni ended up on top with a 1:46.173s in his Campos Racing entry as a number of drivers appeared to pursue qualifying simulations on the third and final afternoon of the test.

HWA Racelab team-mates Jake Hughes and Jack Doohan finished the day and the test combined in second and third with a 1:46.200s and 1:46.324s respectively, each having also spent time on top in the final time attacks.

Liam Lawson (Hitech Grand Prix), who set the pace on Day 2, was just shy of the fastest lap in the morning session and the 1:46.654s which he set at the time left him seventh for Day 3 combined.

Calan Williams (Jenzer Motorsport), who stopped on track during that session and drew a red flag, wound up 25th on a 1:47.520s.

Round 1 supports the Bahrain Grand Prix on March 20-22.

Marcus Armstrong (ART Grand Prix) brought up the foot of the timesheet in Formula 2 with a 1:48.577s in the afternoon session, although that did not appear representative at more than six seconds slower than his best laps on the two preceding days.

Luca Ghiotto (Hitech Grand Prix) recorded the fastest lap of the test with a 1:41.252s midway through the final session.