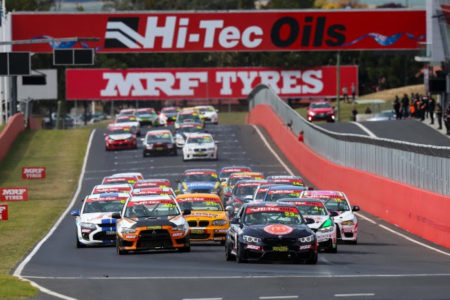 Organisers have released the schedule for this year’s Hi-Tec Oils Bathurst 6 Hour event, which will feature the Mount Panorama debut of TCR Australia.

The main event will start at 11:30 local time/AEST on Easter Sunday, with a record 68 cars currently entered.

Before then, however, will be a full round of TCR Australia, two Australian GT Championship races, and action from Radical Australia, Excels, and Group N Historic Touring Cars.

“While increasing the off-track entertainment at the 2020 event, we’ve not forgotten about what’s happening on-track either – this year’s schedule is packed,” said the Australian Racing Group’s Ken Collier.

“From Friday morning to Sunday night, there’ll be something on-track.

“Entries are tracking strongly in every category and there will be more than 280 cars on track across the Bathurst 6 Hour and support categories.

“Tickets start at just $10 which makes this one of the best-value racing events on the calendar.

“Big fields, lots of action and the variety of categories on show will make this an event fans won’t want to miss.”

The schedule is subject to possible minor changes to accommodate television coverage on the Seven Network, with broadcast and streaming details to be announced.