Aprilia boss confident suspended Iannone will race in Round 1

Aprilia boss confident suspended Iannone will race in Round 1 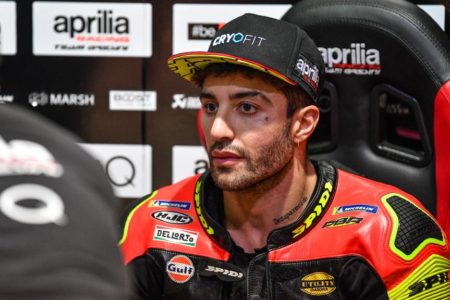 Aprilia Racing CEO Massimo Rivola ‘thinks’ Andrea Iannone will be able to race in the MotoGP season-opener next month despite still being provisionally suspended after failing a drug test.

Aprilia has even confirmed the appointment of Lorenzo Savadori as a test rider during the ongoing Qatar pre-season test, filling the void left should Bradley Smith need to be called up to fill in for Iannone as a race rider.

Despite that, Rivola has now formed the view that the Italian is innocent and believes that he will probably be found as such before the Qatar round.

“Obviously, we are waiting for Andrea to be back,” Rivola told MotoGP.com.

“I hope that this story, let’s say, will finish very, very soon.

“He already provide all the information for the right judgement; now we know that he is not guilty, so we are happy for that.

“The decision that will be taken by the jury, we don’t know; we have to wait.

“I think and I hope that it will be done before Qatar race, so if there’s, let’s say, the chance to race Andrea, I think he could race straight away.

“If he’s not, now we have Bradley on the bike and if we have to wait, we will do it.

“Unfortunately, from our perspective, is that we are suffering and we are missing Andrea, 100 percent, despite Bradley doing a good job.

“We are missing our rider and we would like to have our rider back as soon as possible.”

Iannone was provisionally suspended on December 17, 2019 after a urine sample tested positive for a banned anabolic steroid, a result confirmed by the B sample.

A hearing was held at FIM Headquarters in Switzerland on February 4, but the one-time MotoGP race winner remains sidelined.

He has since provided hair samples which Rivola claimed would prove his innocence, in recent comments made to German publication Speedweek.com.

However, WADA considers only urine tests, which saw Iannone suspended in the first place.

The final day of the Qatar pre-season test commences tonight at 21:00 AEDT, with the field to return to the Losail International Circuit for the grand prix weekend which begins on March 6.