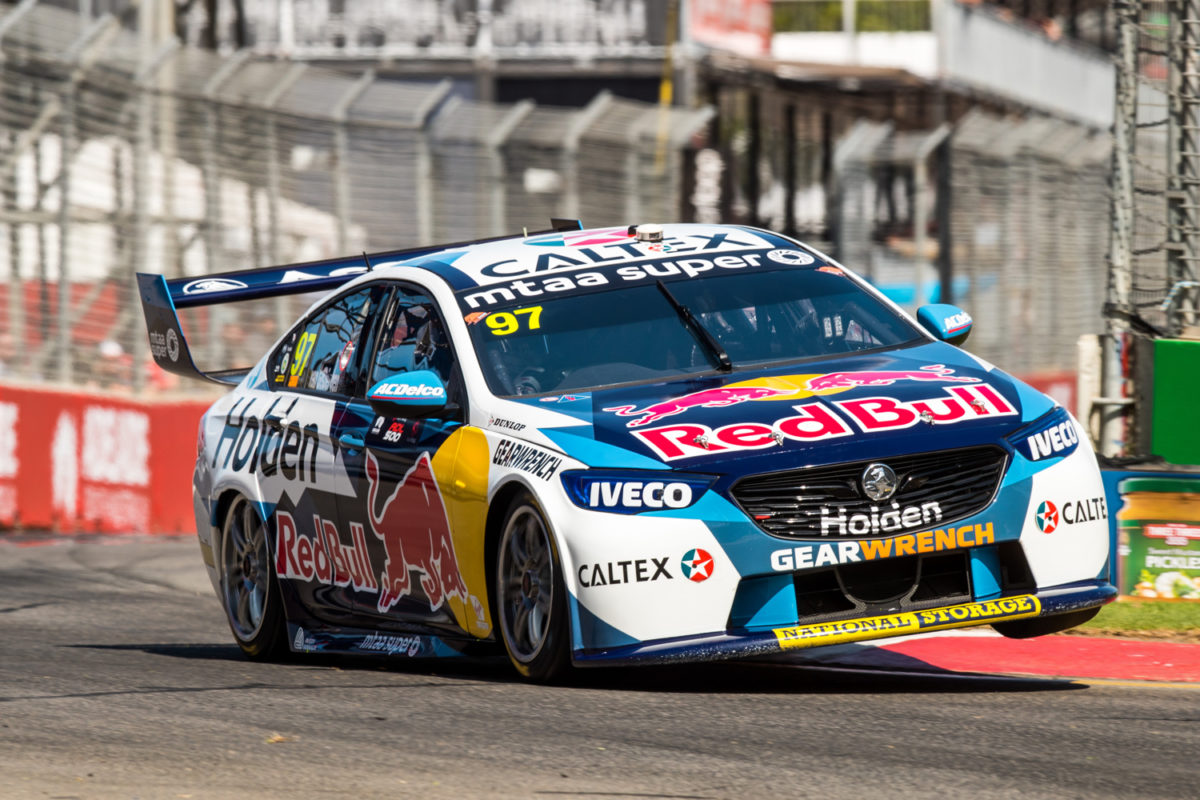 Shane van Gisbergen will start from first position in Race 2 at the Superloop Adelaide 500 after an untidy run into the parklands for provisional pole-sitting team-mate Jamie Whincup.

Van Gisbergen was fifth before the Top 10 Shootout but set a 1:19.8101s with a committed lap in the #97 Red Bull Holden Racing Team ZB Commodore, and will be joined by Shell V-Power Racing Team’s Scott McLaughlin on the front row.

Row 2 will be an all-Tickford affair with Cameron Waters third in the #6 Monster Energy Mustang and Will Davison (#23 Milwaukee Mustang) fourth, while Whincup was only seventh.

Chaz Mostert was fastest when van Gisbergen started his lap, and the Triple Eight Race Engineering driver took a decent touch of a kerb at the Turn 8 Sweeper on a lap which temporarily put him three tenths up on the field.

McLaughlin was less than two hundredths quicker than van Gisbergen to the second sector but the #17 Mustang driver came up 0.0383s short of #97 at the control line.

Van Gisbergen said on his cool down lap, “It’s pretty good, happy with that.

“I made a meal of my Shootout yesterday but I think it was the oil for us last three runners so I was pretty happy to be in the front half of the Shootout there so my car was still warm. It felt pretty good.”

A slightly untidy landing at Senna Chicane set Waters back before he completed a 1:19.9502s lap which leaves him one position away from where he provisionally qualified.

Davison had immediately followed van Gisbergen and bettered the Kiwi by just over a tenth to the second sector but pinched the inside-front at the last corner and ultimately set a 1:20.0336s in the 23Red Racing entry.

Mostert is set to start from fifth having set a 1:20.1131s in the #25 Mobil 1 Appliances Online ZB Commodore, while Fabian Coulthard had almost nothing left on exit of Turn 11 as he drove the #12 Shell V-Power Mustang to a 1:20.1322s which leaves him sixth.

Whincup was more than a tenth faster than van Gisbergen to the second sector but grabbed too much kerb at Turn 11, which picked up the inside wheels of the #88 Red Bull HRT ZB Commodore and carted him wide.

He will start alongside Lee Holdsworth, who was a dropped a row from a provisional sixth courtesy of a 1:20.3071s in the #5 Truck Assist Mustang.

Rick Kelly is due to start from ninth in the #15 Castrol Mustang after all but matching his provisional qualifying time in setting a 1:20.3655s in the one-lap dash.

Anton De Pasquale was first onto the track for the Shootout and went slightly wide at Turn 14 before breaking the beam at 1:20.5161s in the #99 Penrite ZB Commodore.

Whincup put himself on provisional pole with a 1:19.8363s after the chequered flag had been unfurled for Qualifying Part 2, edging Waters by 0.0436s.

Jack Le Brocq will start from 11th in the #55 Supercheap Auto Mustang having been knocked out of the Shootout at the last possible moment by Tickford Racing team-mate Holdsworth, who had escaped a brush with the Turn 8 wall minutes earlier.

Mark Winterbottom was already vulnerable when he committed a kerb hop on his final lap and ended up 12th in the #18 Irwin Tools ZB Commodore, while David Reynolds failed to set a time in the second 10-minute stanza with the #9 Penrite ZB Commodore suspected to have dropped a cylinder.

The first part of the session went red flag before a majority of the 14 starters could set a lap due to Jack Smith finding the wall at the Turn 8 Sweeper.

Smith struck the kerb on his way through the corner, which unsettled the rear of the Brad Jones Racing-run SCT Logistics ZB Commodore and ultimately saw both left-hand corners of Car #4 take a significant hit.

Holdsworth was fast throughout and ended up on top with a 1:10.4348s, while Le Brocq’s late improvement consigned Todd Hazelwood to 15th on the grid in the #14 Plus Fitness ZB Commodore.