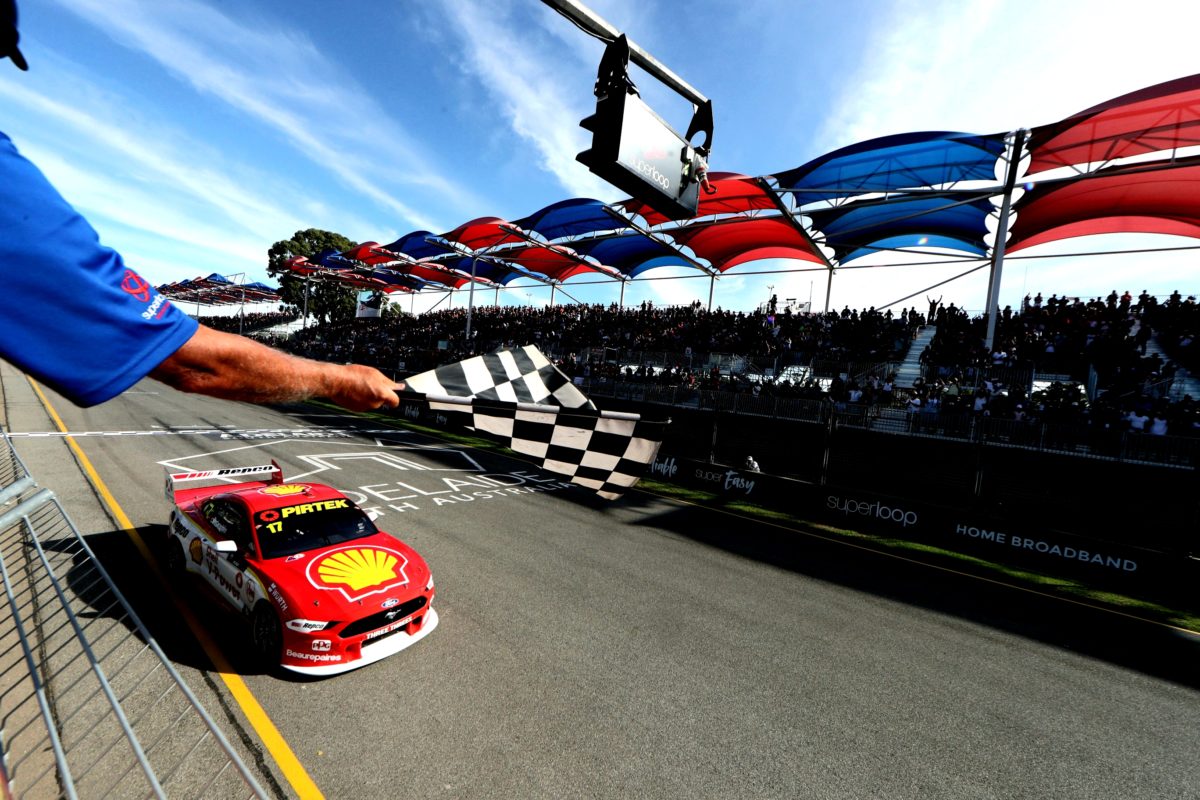 Scott McLaughlin has won Race 2 in Adelaide while Shane van Gisbergen’s hopes of a win and then podium were snuffed out by a pit error and suspected shock failure.

McLaughlin himself looked to have lost a likely victory due to a strategy bungle in pit lane from the Shell V-Power Racing Team, but the Red Bull Holden Racing Team more than repaid the favour when they failed to sufficiently fuel van Gisbergen at his second stop.

The 2016 champion was then unleashed to try and rescue a podium, only for his race to come to an end on the side of Dequetteville Terrace due to a component failure when he was set to sensationally nab third position from Cameron Waters.

The Tickford Racing driver survived the attack to stand on the final step of the podium, one position behind Chaz Mostert on the latter’s first weekend for Walkinshaw Andretti United.

McLaughlin (#17 Mustang) got the jump on van Gisbergen (#97 ZB Commodore) from the outside of the front row and took a clear lead into Senna Chicane, with Waters (#6 Monster Energy Mustang) third from Will Davison (#23 Milwaukee Mustang), Fabian Coulthard (#12 Shell V-Power Mustang), and Whincup (#88 ZB Commodore).

The first Safety Car of the season was called on Lap 2 as a result of an incident triggered when David Reynolds (#9 ZB Commodore) tagged Penrite Racing team-mate Anton De Pasquale (#99 ZB Commodore) at Turn 9 on the opening lap.

A handful of other drivers got caught in the crash, the worst off being Scott Pye who then ended up in the wall at Turn 10 as a result of the damage to his #20 DeWalt ZB Commodore.

Whincup and Lee Holdsworth (#5 Truck Assist Mustang) were among those to pit, and Reynolds served a drive-through, in the period between the Lap 5 restart and another Safety Car being called on Lap 13 due to Chris Pither (#22 Coca-Cola ZB Commodore) running into the tyre wall at Turn 11.

That prompted everyone else to pit and the complexion of the race changed as DJR Team Penske allowed Triple Eight Race Engineering to drop Car #97 and get van Gisbergen out of the pits ahead of McLaughlin.

Racing resumed again on Lap 16 and McLaughlin was initially defensive to Holdsworth, while Percat got by Le Brocq at Turn 9 on Lap 17.

Mostert (#25 Mobil 1 Appliances Online ZB Commodore), who was 11th under Safety Car after a longer first fill, picked off Heimgartner and Hazelwood through the middle stint, amid a number of battles around the back end of the top 10.

McLaughlin was more than five seconds behind van Gisbergen, well over the seven-litre fuel advantage which he had over #97, when he was among the first to take his second pit stop at the end of Lap 43.

Triple Eight responded by calling van Gisbergen in a lap later, but that pit stop was even more damaging to his hopes than DJRTP’s strategic faux pas when the fuel man released his hoses with reportedly 20mL of BP Ultimate E85 still to sink into the car.

Mostert had followed van Gisbergen into the lane and some of the time he spent earlier came back to him, while Whincup peeled off from the official race lead at the end of Lap 44.

By the time most of the second cycle of stops had been completed, van Gisbergen had what would have been the effective lead by a couple of seconds over McLaughlin, with Mostert a distant third.

Waters, who missed pit entry at his first attempt, followed, from Davison, Whincup, Holdsworth, Percat, Hazelwood, Reynolds, and Coulthard in an effective 11th.

Van Gisbergen had passed James Courtney (#19 Boost Mobile ZB Commodore) on the road before the Team Sydney driver got a chance to take his final pit stop.

When Courtney did so at the end of Lap 50, van Gisbergen was almost 3.8s up on McLaughlin, after the gap had dropped below two seconds shortly after #97’s second stop.

Van Gisbergen was given licence to go as hard as he could to build a margin over the likes of Mostert and Waters, and was 9.5s ahead of McLaughlin when he pitted at the end of Lap 68 to meet the 140-litre fuel drop.

Triple Eight threw another set of tyres at Car #97 and van Gisbergen rejoined in fourth at 3.2s behind Waters, who was only a few car lengths adrift of Mostert, by the time he completed his out lap.

The New Zealander set the fastest lap of the race on Lap 71, gaining 1.2s on Waters in those 3.22km alone, but received another body blow when Triple Eight soon began to fetch shock absorbers amid concerns of a failure.

Van Gisbergen caught Waters on Lap 73 and the Tickford driver had to play defensive through the terraces on Lap 75, just as something broke in the right-front corner of the ZB Commodore.

While able to reverse away from Turn 7 and continue down Bartels Road, van Gisbergen went little further and recorded a DNF.

McLaughlin won by 10.3069s in the end, from Mostert, Waters, Davison, Whincup, Holdsworth, Percat, and Reynolds.

“Look, full credit to Shane and his team, they really should have won that race,” said McLaughlin.

“Obviously a mistake or something in pit lane, I don’t know what happened, but they had the faster car.

“I’ll take it, we’ll take the luck when we can, but just really happy for all the Ford fans out there to have a win today on a pretty big weekend for Holden, but for a Ford to win it’s awesome.”

On his own pit stop drama, the winner said, “I don’t know. We’ll look back at it at the shop.

“My guys always put me on a great strategy, yesterday they put me on an awesome one. Today I was like ‘Damn, we didn’t get in front of him,’ but I just had to pull the socks up and have a crack.”

His team-mate Coulthard took ninth after getting by Hazelwood at Turn 6 on Lap 58, while Andre Heimgartner (#7 Ned Mustang) rounded out the top 10.

Van Gisbergen was one of four non-finishers, and was given a lift back to the pits by hopping into Waters’ Mustang during the cool down lap.

The second event of the season is the Beaurepaires Melbourne 400 at Albert Park from March 12-15.