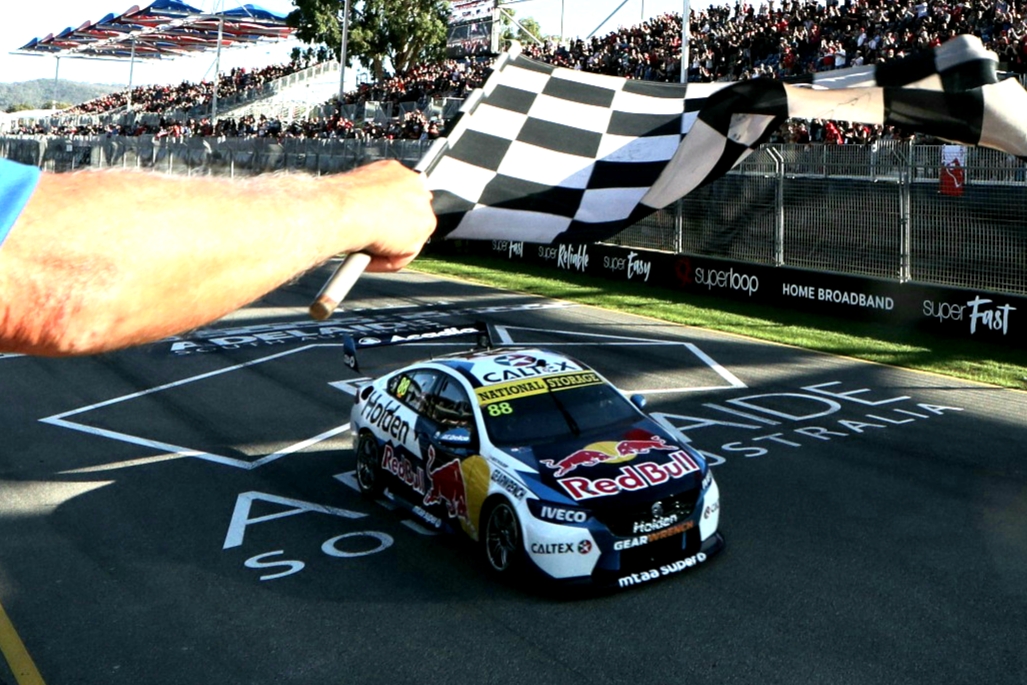 Jamie Whincup has won Race 1 of the 2020 Supercars Championship as Scott McLaughlin rescued a second placing on the Adelaide streets through speed and pit strategy.

McLaughlin led through the middle stint of the 78-lap opener of the Superloop Adelaide 500 event but it was Whincup who was in control for the duration and the Red Bull Holden Racing Team driver prevailed by 5.2378s in the end.

Shane van Gisbergen saw that both the factory-backed Triple Eight ZB Commodores finished in the podium placings, in the same week in which General Motors announced that Holden would be closed down by 2021.

David Reynolds dropped a spot through each of the two pit stop cycles to finish fourth in the #9 Penrite ZB Commodore, with Tickford Racing stable-mates Will Davison (#23 Milwaukee Mustang) and Cameron Waters (#6 Monster Energy Mustang) took fifth and sixth respectively.

Reynolds stuck with Whincup early on but the margin from first to second drifted beyond one second on Lap 7, at which time McLaughlin pitted from seventh in order to get into some clean air.

The 2019 Adelaide race winner rejoined in 22nd spot, with Nick Percat (#8 X-Convenience ZB Commodore) having already pitted due to a steering rack failure and Garry Jacobson (#35 Yellow Cover ZB Commodore) in the shed after hitting the wall at Turn 8.

Mostert was tailing Davison for the first 20 laps but had fallen almost two seconds behind #23, and had van Gisbergen in his mirrors, when he pitted at the end of Lap 22.

Reynolds had fallen back to about 4.8s behind Whincup on his way into the pits on Lap 23, and he was followed into the lane by Davison and Waters.

Davison rejoined in 11th, a spot behind Reynolds, but had Mostert, in his first race for Walkinshaw Andretti United, breathing down his neck on warm tyres.

The 23Red driver had to defend hard to hold onto his position, precipitating contact between Cars #23 and #25, and then Cars #25 and #6 when Waters tried to capitalise on the stoush through the terraces on Lap 25.

Whincup pitted on Lap 27 and was more than four seconds in arrears of McLaughlin once tyres came up to temperature, but the DJR Team Penske driver had been short filled and was staring down a dwell time of approximately 10 seconds longer than the initial race leader at his second pit stop.

By the time the cycle completed at the end of Lap 30, McLaughlin was leading by 4.3s from Whincup, Reynolds, van Gisbergen, Davison, Mostert, and Waters.

The front-runners held position through the middle stint of the race, although van Gisbergen came to be increasingly pressuring Reynolds for third and Davison was starting to bottle up Mostert and Waters as the second pit stop cycle approached.

The latter was the first of that group to pit again, on Lap 40, and Reynolds peeled off a lap later when around seven seconds separated him from second placed Whincup.

McLaughlin’s nominal lead over Whincup had fallen to 2.1s by the time he had to pit at the end of Lap 42, when Mostert also took service for the final time and rejoined behind Waters.

Car #17 got out ahead of Car #9, and Davison rejoined just behind the latter after his stop on Lap 43,

Whincup stayed out until Lap 47 before resuming in fourth position, but ahead of McLaughlin on the race track, with van Gisbergen in the official race lead.

Car #97 stayed there for two laps before Triple Eight Race Engineering called the Kiwi in, and he was chasing McLaughlin for his final stint, but with the lapped Jack Smith (#4 SCT Logistics ZB Commodore) in between them.

Smith stayed ahead of van Gisbergen for almost four laps, by which time he had been issued a drive-through penalty for disobeying blue flags, while McLaughlin was being held up by Scott Pye (#20 DeWalt ZB Commodore), who was yet to take his second pit stop.

The hold-up allowed van Gisbergen to close in on Car #17, only for the gap to expand again when Pye filed into the lane on Lap 57.

Whincup, who was the official race leader again due to Fabian Coulthard (#12 Shell V-Power Mustang) having pitted on Lap 55, was nine seconds up on McLaughlin by that point.

Van Gisbergen had another attempt at running down McLaughlin as the lap count ticked through the early sixties, but did not seriously threaten the leading Ford driver.

The margin ahead of the other end of the #17 Mustang dwindled to 5.0s with a lap remaining, but there was never a threat to Whincup through the final stint of the motor race.

“I had a rocket today, the car was excellent, made the most of pole position and everything was pretty straightforward,” said Whincup, who now has 119 Supercars Championship race wins.

“These boys were fast but we had track position, we were up the road a little bit.

“I suppose we’ve got to dedicate this one to Holden. It’s been a bloody tough week for everyone involved and it’s great to get a win.

“We got smoked by the other brand here last year so it’s nice to bounce back.”

They were split by Coulthard, who threw down the challenge to Kelly and even gave Car #15 a small touch-up but could not find a way past.

Bryce Fullwood did make the finish, five laps down in 21st position, after an early hit with the wall at Turn 11 which caused toe link damage in the #2 Mobil 1 Middy’s ZB Commodore.

Percat also got home despite a recurrence of steering rack problems, but Team Sydney’s James Courtney (#19 Boost Mobile ZB Commodore) joined Jacobson as a DNF after smacking the wall at the Turn 8 Sweeper on Lap 17.

The Safety Car did not appear despite those dramas, amid a dearth of on-track passing at least at the front end of the field.

With one race in the books for the Virgin Australia Supercars Championship in 2020, Whincup leads the championship by 12 points over McLaughlin.