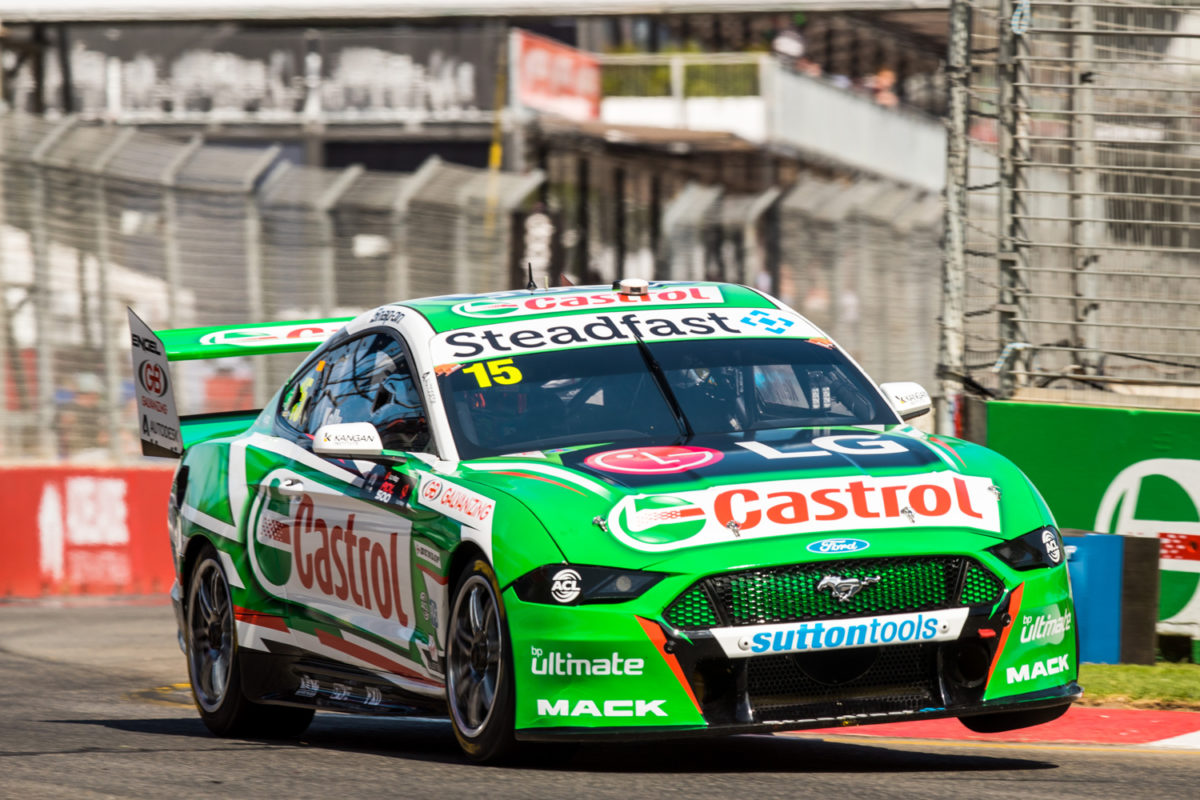 Rick Kelly has high hopes for 2020

Rick Kelly believes he and stablemate Andre Heimgartner have the ability to be Supercars pacesetters this year for Kelly Racing.

Once factory-backed, the team has swapped from the outdated Nissan Altima after seven years to the Ford Mustang.

This year will mark only the second season the Mustang has run in the Virgin Australia Supercars Championship.

After a shakedown and a pre-season hit out at the BP Ultimate SuperTest, Kelly said he had the most fun so far in Thursday’s first practice session.

“It was actually a really exciting session for us,” Kelly told Speedcafe.com.

“The balance of the car was actually really good straight out of the gate. It’s the first decent session with the Mustang having a go.

“It was really impressive to feel. I could already notice it behaves quite similar [to the Altima] in a lot of areas.

“There are some turns where I have to modify my style to suit what the car is offering up, that’s really exciting. It really just shows how new we are to a new car like this.

“It will still take time to understand set up and driving.”

The past 12 weeks have been full-on for Kelly Racing, converting Heimgartner’s former Altima while Kelly got given a new chassis.

The process has been documented in the eight-part Road to Mustang series from inception to shakedown.

Kelly said he’s stoked with the final result, especially considering what he believed to be relatively minor on-track issues, particularly a fuel leak.

“The guys have done such a good job,” he said.

“The engine is really good, the gear shifts are crisp straight away. It’s really exciting. You can see from the times we’re not first and second at the moment, but the potential is there.

“It gives us the motivation to come back when we do a good job, we should be closer towards the front. It was a good session.”

Kelly’s first time out in the car ended with a moment at Turn 8 that saw him graze the outside wall.

“At the end there I grazed the wall. It wasn’t one of those cases of pushing too hard. I actually released the brake just a smidge too early.

“When you do that in these cars it takes the weight off the front and you lose that turn in so it pushed a bit wide.

“You have to go deeper and hold the weight on the car to get it around there. It’s a good thing to learn.

“This car still does tend to have that high-speed understeer. I’ll just tame it down a little bit. I just want to get back in and start tuning it.

“I feel like we’ve got that stability in the car to be able to hustle it around and get a good lap time.

“It certainly does then offer you that little bit of confidence. It’s going to take us a few races to understand our performance and what those differences are.”

Kelly said he’s having to adapt not only to the feeling of his new Ford Mustang but the relative cockpit position to the body as well.

Fundamentally, Kelly’s position in the car hasn’t changed. However, the silhouette around him has.

As a result of the change, the nose of the car is longer and the glasshouse closer to the driver than it was in the Altima.

“One of the biggest differences I notice with this car is I feel like I’m way too close to everything,” said Kelly.

“The windscreen position is 300 mm closer to me. The mirrors are about a foot and a half further back.

“You feel you’re well and truly closer to the action because of the different mounting of the body onto the chassis compared to what we had.

“There is actually a massive difference.”

Despite the difference in position, Kelly said he doesn’t feel like the change is a hindrance to his driving.

“The vision in this car is actually really good. You can see between the mirror and the a-pillar for the apexes.

“Sometimes you can’t do that in other cars. The visibility is really good. You feel like you’re in a really different position but you’re sitting in the same place.”