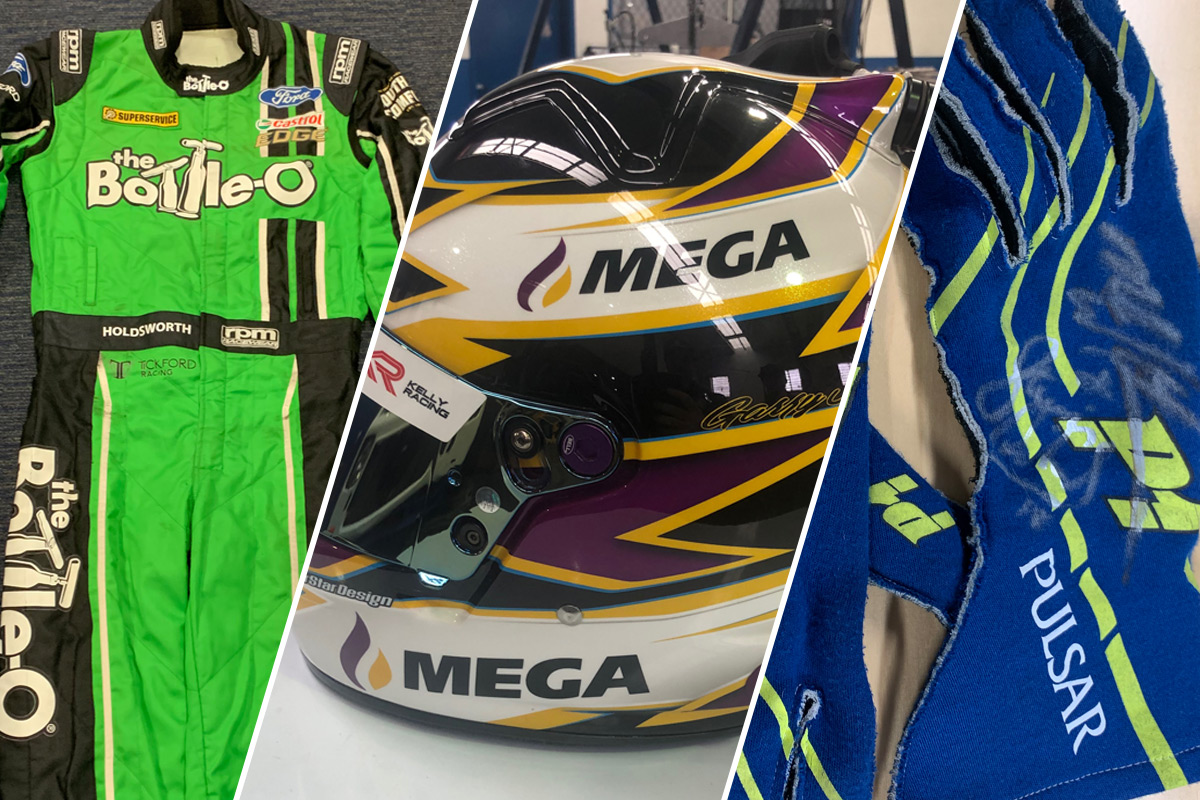 A sample of the items which will be auctioned off

An assortment of rare Supercars memorabilia will go under the hammer as part of a cancer research fundraising push by the category’s Head of Motorsport, Adrian Burgess.

Burgess himself will take part in next month’s Tour de Cure bicycle event and has also managed to pull together a selection of items which will be sold through Lloyds Auctions to boost the cause.

Among the range of driver apparel and panels on offer are the left-front wheel from Scott McLaughlin’s spectacular crash at last year’s Gold Coast 600 and a side skirt from Craig Lowndes’ last race as a full-time driver in 2018.

Bidding is now open for the items via Lloyds’ website, and will run until March 11.

Burgess will undertake the 1400km journey from Newcastle to Noosa for this year’s Tour de Cure from March 26-April 3.

Burgess has been touched by cancer on multiple occasions, first when his mother passed away when he was 20 years old, and then when ex-wife Jean succumbed to illness last August.

“Last year was certainly a tough year for me and our daughter Darcy,” he explained.

“Jean had a four-month battle with lung cancer and when she died Darcy and myself pledged to do what we could to raise awareness and funds for cancer research.

“Darcy is planning to run a marathon, but for me, I’ve always been a keen cyclist, so the Tour de Cure is a nice charity for me to get behind.

“Cancer is a disease that’s touched everyone in some way and the Tour de Cure has done an amazing job to raise funds and awareness over the years.”

Burgess has accelerated his training in recent months, predicting, “It’s certainly going to be a physical challenge, but the bit I can’t prepare for is going to be the emotional challenge.”

He also paid tribute to those in the paddock, where he has been able to leverage the relationships which he has forged in well over a decade in Supercars, for their support.

“Luckily in my position I’ve got a lot of contacts in pitlane, so it made sense to get an auction going as a way of raising funds,” added Burgess.

“There’s been a great reaction from a lot of people, I can’t thank them enough. There’s over 20 items there and I’m hoping we’ll add more as we go.”

Tour de Cure Australia has raised more than $50 million for cancer research since 2007.