Crompton: Driving for the Holden Racing Team was a dream

Crompton: Driving for the Holden Racing Team was a dream 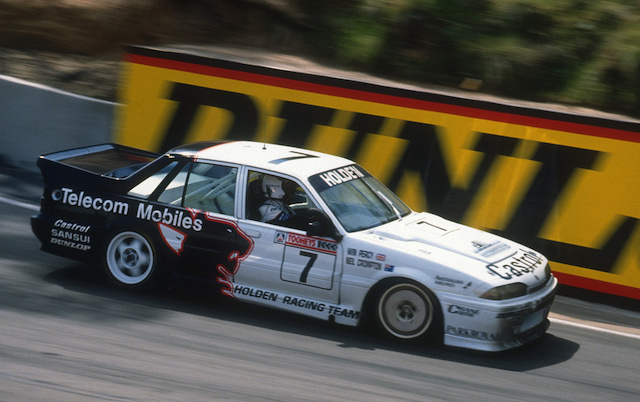 The Group A VL Commodore which Neil Crompton and Win Percy drove for the Holden Racing Team in the 1989 Bathurst 1000 pic: an1images.com

Neil Crompton has reflected on the ‘dream’ that he and others held and fulfilled to drive for the Holden Racing Team, in the wake of the marque’s demise.

Crompton raced for HRT over a three-year span covering its formative years and the start of the fully-fledged, Tom Walkinshaw Racing era in 1990.

He finished seventh with Win Percy in the 1989 Bathurst 1000 when the outfit was run under contract by Perkins Engineering, and recorded a fifth with Brad Jones when team-mates Percy and Allan Grice delivered HRT its first win in the Great Race in the following year.

Speaking on Fox Sports’ Supercars Trackside, Crompton reflected on the privilege that he and others, including those who have now joined him in punditry, enjoyed as official factory drivers for the Australian-born manufacturer.

“I think all of us – Greg (Murphy), Craig (Lowndes), Mark (Skaife), myself – we all grew up covered in the notion that one day – one day – we might be Holden factory drivers,” recalled the 59-year-old.

“We were very lucky individuals and we got to live that dream. We got to drive with people like Peter Brock and various other members of the panel there over the years, and to be able to be part of that whole story over decades.

“And stop and think about it; Holden have been directly investing in motorsport in this country for more than 50 years, so (there is) certainly massive amount of emotion when that disappears for us.”

Crompton admitted that he too once thought he would never see the day that Holden no longer existed.

He expressed his ‘heart-wrenching’ sadness at the loss of Holden, despite its fate becoming something of a logical conclusion given the freefall in sales in recent years.

“I spoke to Mark (Skaife) earlier in the week and we were just sombre, quite frankly, and wondering, ‘Okay, what does this all mean?’

“It’s not as though, to a degree, we didn’t see this coming when you stop and think about the way the sales have gone and where the management team’s drifted to, some of the decisions that have been made along the way.

“So, despite the fact that we possibly had some forward knowledge on this, it’s still really heart-wrenching and it’s quite dismaying to live through.”

Crompton was nevertheless bullish about the prospects of the Supercars Championship after the loss of Holden, which has been a mainstay of the category and statistically its most successful marque.

He alluded to the importance of the Gen3 project, with as yet unconfirmed new regulations set to take effect in 2022.

“Even at the airport (on the way to Adelaide), I had some people saying to me, ‘Does this mean the end of Supercars?’” added Crompton.

“Supercars will continue on into the future, the racing will be great, we will find a way.

“We need to find relevant cars, a relevant product that maintains the excitement that people have loved over decades, and there’s a lot of people working hard in the background that will do that.”

Crompton’s comments follows those earlier this week of Skaife and Lowndes, who respectively admitted to being all but in tears and ‘devastated’ at the Holden news.

The boss of Holden’s current factory team, Triple Eight Race Engineering’s Roland Dane, described the passing into history of such an iconic brand as “very sad”, while long-time privateer Larry Perkins paid tribute to its support of motorsport even in the face of resistance from parent company General Motors.