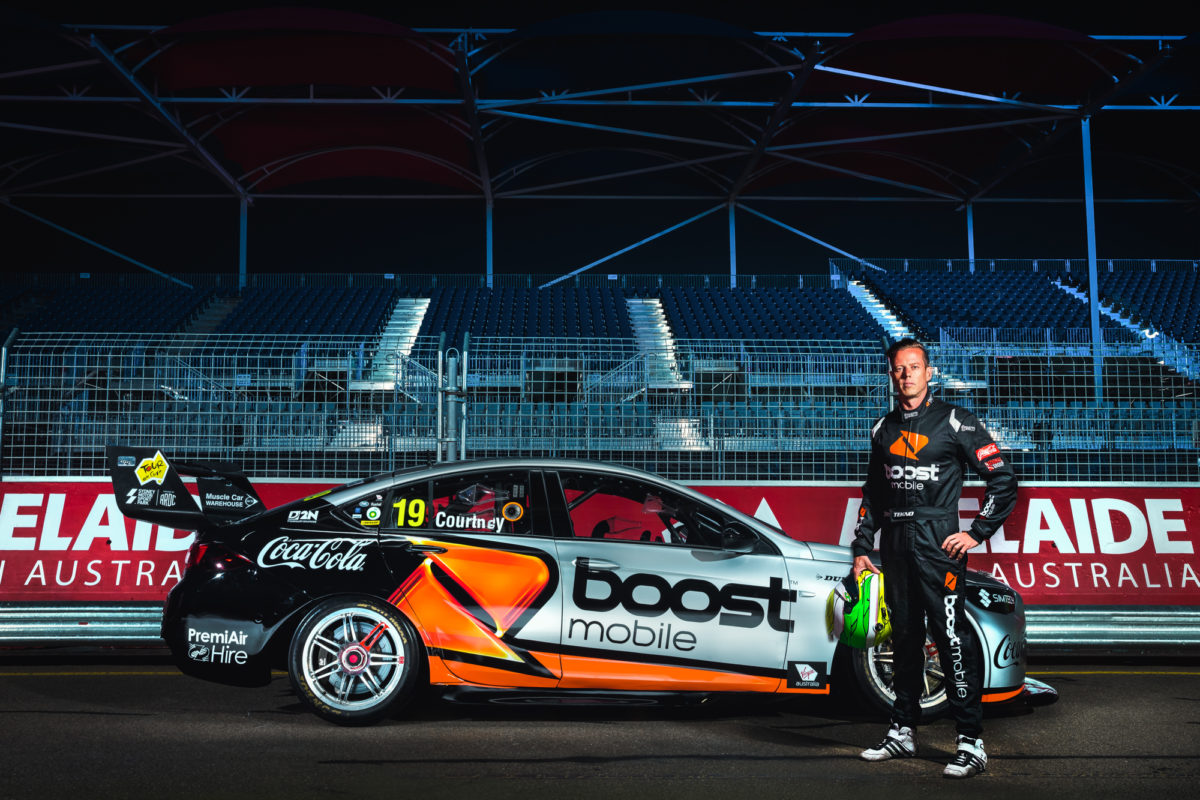 James Courtney has swapped Coca-Cola red for Boost Mobile silver ahead of this weekend’s Superloop Adelaide 500.

An 11th hour deal saw Courtney’s car re-wrapped in pit lane in Adelaide on Wednesday after running at Tuesday’s BP Ultimate SuperTest in the red colours seen at the series’ launch.

Team-mate Chris Pither is set to continue with Coca-Cola branding.

Speaking with Speedcafe.com on Wednesday, Courtney admitted he’d been working alongside team boss Jonathon Webb to help put the team together in recent months.

Boost Mobile founder Peter Adderton referred to its relationship with Courtney as being a significant factor the deal coming together, despite the telco boss’s recent misgivings about technical parity as major sponsor of Garry Rogers Motorsport.

“Boost has a history of being loyal to our ambassadors, like Chad Reed and many other ambassadors, who we have supported for close to 20 years,” said Adderton.

“And James has been loyal to us, proudly supporting the Boost brand for many years.

“When James called and asked us to be part of his 2020 campaign, he knew our concerns about fighting for parity, but he still asked, and we agreed.

“Sometimes you need to look at the individual and put aside your differences and support people/ambassadors who have supported you.

“James supported our Boost brand over many, many, years to help us get it to what it is today. We have a history of loyalty and continue to see value in James as an ambassador.”

Boost Mobile general manager Jason Haynes added, “This is an exciting partnership and opportunity for Boost Mobile to team up with James and Team Sydney for 2020.

“Brands like Boost Mobile that have passionate owners who are willing to invest their own dollars into it like the fans do each race weekend are needed.

“This is a further extension of the commitment to the sport, drivers and teams we have shown over the years in Superbikes, Supercross, Supertrucks, Supercars, GT racing, NASCAR, IndyCar, drivers and more.

“We love being part of the show and look forward to being trackside with the fans in 2020 cheering James on.

“One thing is for sure it will never be boring; we will make sure of that.”

Webb said, “Boost Mobile are no stranger to the Supercars paddock. They have long been passionate and loyal race supporters.

“Team Sydney will stand out on track with JC in his Boost Mobile Racing Supercar, and we are dedicated to delivering results for those who join us on this journey.”

The team had arrived in Adelaide with its transporter carrying Tekno branding, while its garage features a workbench with ‘SVG97’ insignia, indications of how recently the deal came together.

Courtney will hit the Adelaide Parklands Circuit in his new colours in opening practice at 15:55 local time/16:25 AEDT.