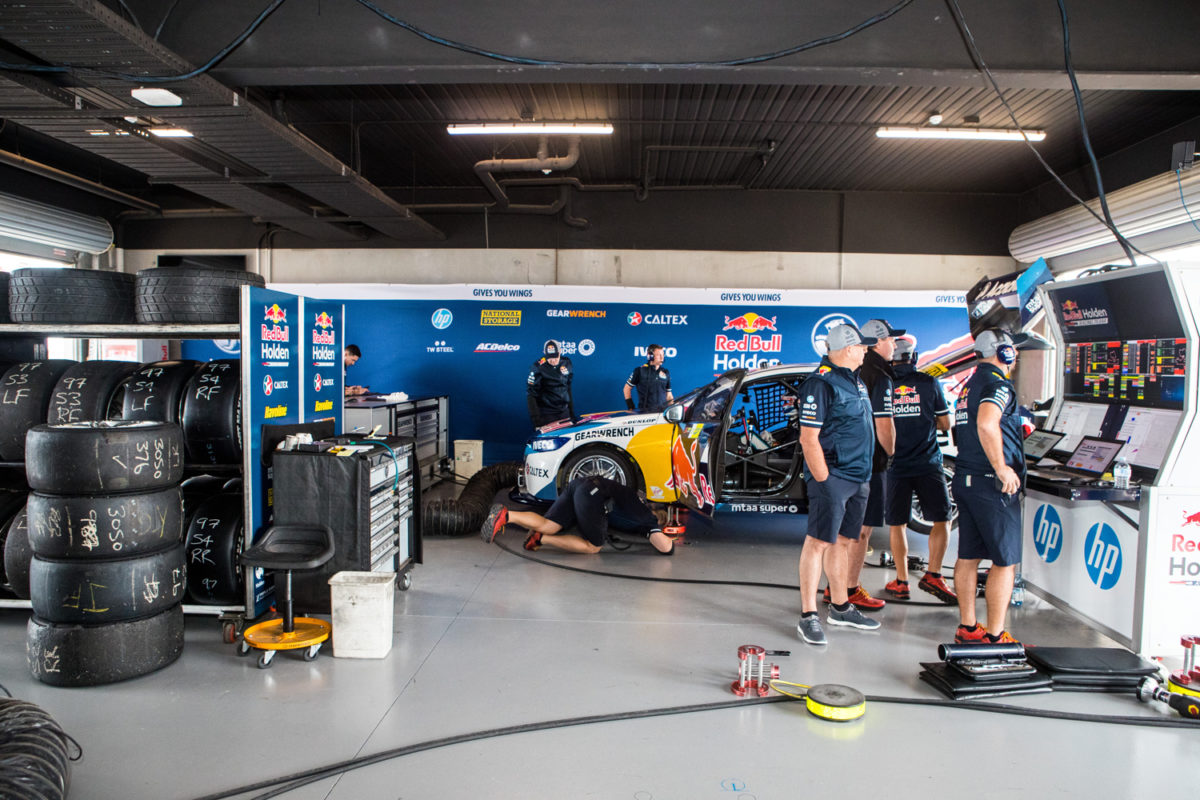 The Red Bull Holden Racing Team garage at The Bend

General Motors dropped the bombshell the day before the start of official track activity in the 2020 Virgin Australia Supercars Championship, with Holden to be no more (but for service and aftersales obligations) “by 2021”.

Triple Eight Race Engineering has been Holden’s official factory team since 2017, and a Commodore squad for seven years prior to that after a high-profile switch from Ford.

The Banyo outfit is contracted to represent Holden as its factory team until the end of next year although, with no cars to sell, the marque’s interim Chairman and Managing Director, Kristian Aquilina, cast doubt over its motorsport activities beyond 2020.

According to Dane, there has been little chance to address his team given that they were in transit for the BP Ultimate SuperTest at The Bend when news broke yesterday.

“I’ve had very little chance to talk to them to be honest, because most of them were travelling yesterday down here,” he explained.

“But I’ve certainly made them aware of what’s going on and I hope they believe in me and they’ll wait and see what happens.”

The opening race event of the season, the Superloop Adelaide 500, begins in Holden’s home town two days from now, and Dane maintains that morale is positive.

“We’re a race team. We try and do our work properly as a race team like all the other ones up and down here and we crack on with the job in hand.”

Craig Lowndes, who continues as co-driver for Triple Eight’s Jamie Whincup in this year’s Pirtek Enduro Cup, admitted that he was ‘devastated’ when news reached him yesterday.

“I was devastated, because Holden have been such a strong, iconic brand here in Australia growing up,” said Lowndes on Nine’s Today show.

“There’s always been that rivalry between the two majors with Holden and Ford, and for me it was devastating to hear the news.

“We’ve all now got to accept it and see what the future holds.”

Lowndes has four wins in the Supercheap Auto Bathurst 1000 with Holden, the first with the Walkinshaw-era Holden Racing Team where he also achieved his three championship titles.

It currently fields a pair of ZB Commodores for Whincup and Shane van Gisbergen, as well as a VF Commodore for Angelo Mouzouris in the Dunlop Super2 Series.

Dane advised that he is set to meet with GM to discuss the implications of its decision this week.