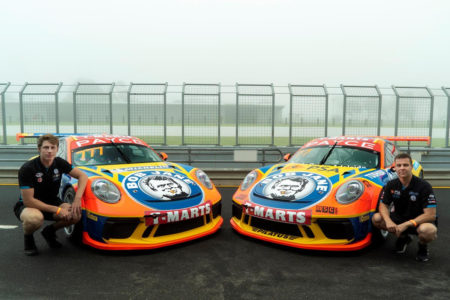 Sonic Motor Racing Services has announced a mixture of youth and experience in their four-car line-up for this year’s Porsche Payce Carrera Cup which starts at the Superloop 500 in Adelaide this weekend.

Aaron Love also makes the full-time leap up from Porsche Michelin Sprint Challenge, but does have one round of Porsche PAYCE Carrera Cup under his belt after making an early debut at the final round on the Gold Coast last year.

Love is the younger brother of Jordan Love, who won the Carrera Cup title last year with Sonic.

The four-car squad is headed by Dale Wood who finished second in last year’s championship after a hectic final round battle on the streets of Surfers Paradise.

Outside of Carrera Cup, Sonic will continue to enter cars in the Porsche Michelin Sprint Challenge, as well its famous Formula Ford program that has yielded 11 national titles in its 22 year history.

“This is one of the strongest Carrera Cup driver line-ups that we’ve had and I’m really looking forward to the year,” said Mick Ritter.

“We know that Dale Wood will be a contender from the word go. He narrowly missed the title last year and he will be pushing to go one better.

“There will be nothing stopping Michael (Almond) from winning races and battling for the title too. He has proven that he has the speed to be a threat in every race.

“And it’s great to see both Max and Aaron step up from GT3 Cup Challenge. They were amongst the top three last year and, while this class is more competitive, I am very confident that they’ll settle into the leading pack quickly.”

Wood returns to the championship hungrier than ever after getting so close in 2019.

“I could not be happier with the way the Porsche has come together with the major support of Timken and the rest of our partner group,” said Wood.

“You can be sure we will be having a serious crack from the first green flag in Adelaide.

“We proved we can be competitive in this terrific one-make series, but we have some unfinished business in 2020.”

Vidau knows the challenge ahead after his step up in class.

“Going from GT3 Cup Challenge (Porsche Michelin Sprint Challenge) to Carrera Cup is a big step up, but this is why the Porsche Pyramid is designed and it’s the perfect stepping stone,” said Vidau.

“We should be in a good position to go well. I know I have a great car and team around me.

“Ultimately, my goal for the season is to be in the top five and be ahead of all my other rivals who have moved up from GT3 Cup Challenge.”

Almond is looking forward to another full-time season in the category.

“Any year that I get to compete in a full season in a Porsche is awesome, and I’m really looking forward to the challenge this year,” said Almond.

“There’s a lot of drivers with a lot of speed – it’s a hard season to predict the results. I think you’ll find they’ll be different race winners and different podium finishers every round.

”I’m really proud to drive the Bob Jane T-Marts Porsche again, now for my third season. It’s an iconic brand and it has been a big part of Australian motorsport culture.”

Love knows he has some big shoes to fill after his brother clinched last year’s title.

“It’s cool that my brother won last year’s title. I’ve been working with him to improve myself and I can only hope to replicate his feats,” said Love.

“Doing the GT3 Cup Challenge last year was a perfect grounding to get ready for this year. The car’s performances are very similar, so it will be just a matter of working towards the front of the field.

“It’s great to continue with the Sonic team again. I know all the faces, I know how they work and they know how to get the best out of me.”